The University has recognized her entrepreneurial career in the field of ICT on the African continent, her significant work in the promotion of engineering studies among young women in Africa, and her social commitment to breaking the vicious circles of poverty. 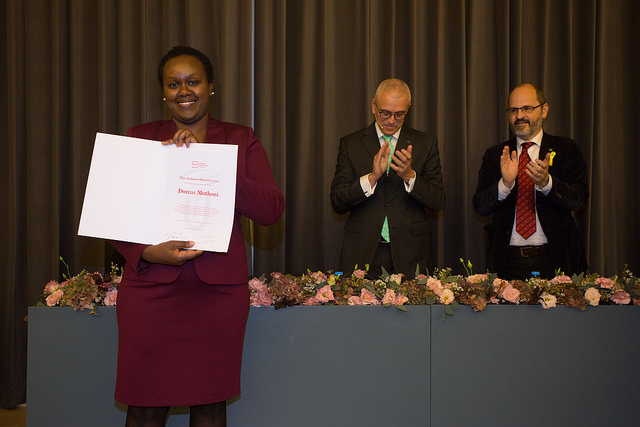 Dorcas Muthoni, Kenyan engineer and entrepreneur, CEO and founder of the company OpenWorld, has been invested doctor honoris causa by UPF at a ceremony held on Friday, 15 December at noon, in the auditorium of the Poblenou campus.

She is the fifteenth person to be made honoris causa by the University, since the first recognition of Desmond Tutu (1999-2000) until the last, received by Frederik Wiseman during the 2015-2016 academic year, and the second woman, after Michelle Bachelet (2009-2010).

The ceremony was presided by the rector of the University, Jaume Casals, who was accompanied at the presidential table by Núria Basi, chair of the Board of Trustees, and Pere Torra, general secretary.

After the entrance of the academic authorities to the sound of Processional 1.  UPF, created and performed especially for the occasion by the Phonos Foundation, Jaume Casals gave the opening speech during which Ms Muthoni was accompanied at all times by her patron, Miquel Oliver, director and lecturer at the Department of Information and Communication Technologies (DTIC).

Pere Torra read out the agreement of the Board of Governors (meeting of 18 October) in which “at the proposal of the Department of Information and Communication Technologies and of the Polytechnic School, agrees to grant the title of doctor honoris causa by Pompeu Fabra University to Ms Dorcas Muthoni, in recognition of her entrepreneurial career in the field of ICTs on the African continent, as well as her activity in promoting engineering studies among young women in Africa and her social commitment to breaking the vicious circles of poverty”.

Dorcas Muthoni, along with Miquel Oliver entered the auditorium with all in attendance standing, which was followed by the reading of the laudatio speech for the candidate by Marcelo Bertalmío, professor of the Department of Information and Communication Technologies.

Laudatio speech given by Marcelo Bertalmío

> Video of the laudatio for Dorcas Muthoni, by Marcelo Bertalmío

Investiture of Dorcas Muthoni and her acceptance speech 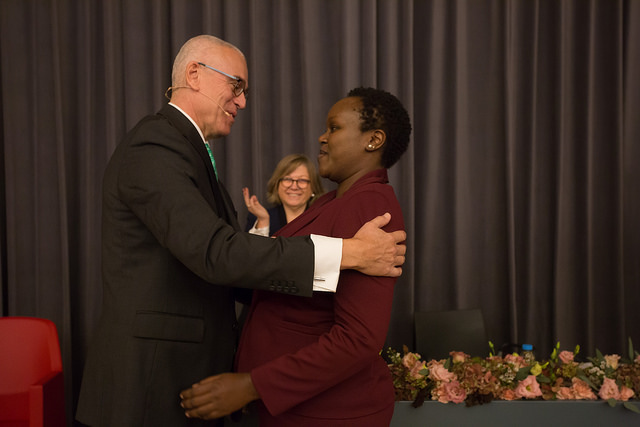 The most solemn moment of the ceremony was Dorcas Muthoni’s investiture, when she received the medal of honoris causa by UPF from the rector, Jaume Casals, who gave her a fraternal embrace signalling her becoming a member of the University’s Senate of doctors.

And as a new doctor by UPF, Dorcas Muthoni gave her acceptance speech.

The speech was greeted with strong applause by those in attendance, who gave her a standing ovation to show their admiration for the new doctor.

Performance of El cant dels ocells (‘The song of the birds’)

Now in the last part of the ceremony, music gained prominence in the form of one of the most innovative instruments created recently, the reactable, the result of research conducted at the University’s Department of Information and Communication Technologies.

Andres Bucci and Irene Labrador performed The song of the birds specifically arranged for cello and reactable.

The reactable, created by Sergi Jordà, Marcos Alonso, Gunter Geiger and Martin Kaltenbrunner, is a unique instrument in the world that was unveiled in 2005 and was developed from research by UPF’s Music Technology research group (MTG). As its creators explain, the instrument allows “seeing music with your eyes” and, at the same time, “holding it and playing with it with your hands”. 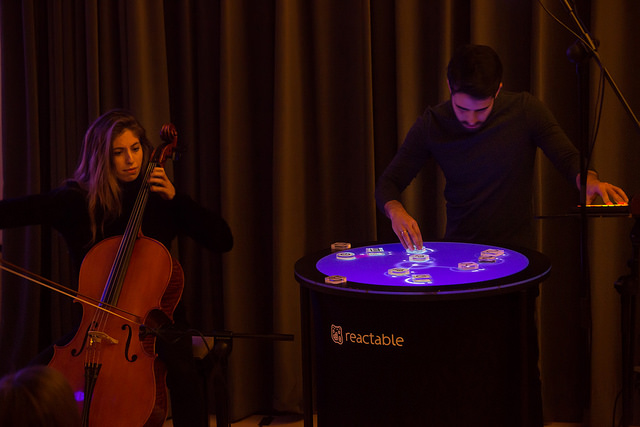 It is surprising for its futuristic design, made of plastic objects of different colours and sizes distributed over an illuminated desk, and especially for the music it makes as the player moves objects towards and away from each other.

Among the awards it has received since its inception are the Barcelona City Award (2007) and the prestigious Ars Electronica Golden Nica Award (2008). In addition, since 2007, the Icelandic singer Björk has incorporated it into her world tours, which led the American magazine Rolling Stone to choose it as instrument of the year.

In what was the last speech of the event, Jaume Casals stressed that “this is the first honoris causa proposed by the Department of Information and Communication Technologies”, a department of the University “that has a very particular trajectory and size, and is now approaching the more mature departments”. 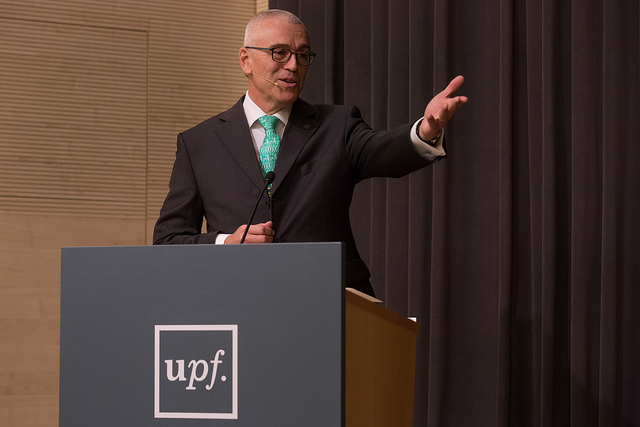 In this line, he dubbed this approximation as UPF’s Dorcas moment: “It is important to build a unique university and to do so the different areas must meet through their best parts, promoting contact between mature departments and smaller ones that are displaying a highly relevant trajectory”.

Finally, the rector wished explicitly to thank everyone who made the event possible, from the musicians of the Phonos Foundation to the administration and services staff involved.

The performance by the UPF Choir of the traditional university anthem Gaudeamus igitur put an end to a ceremony full of emotions. 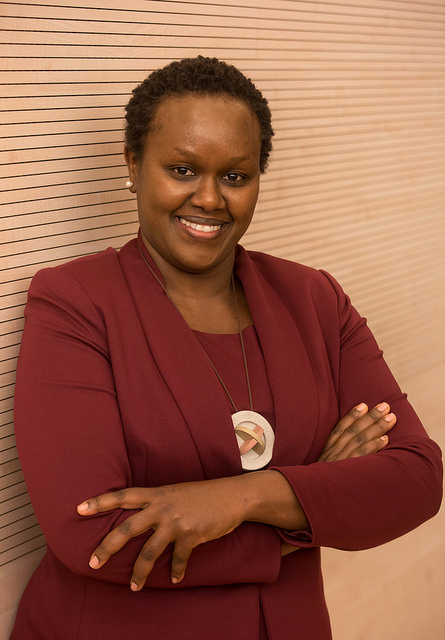 Dorcas Muthoni (@DorcasMuthoni, Nyeri, 1979), who graduated in Computer Science from the University of Nairobi, has specialized training in wireless networks, radio-communications and strategic technology planning, among other subjects. Through her everyday work as a businesswoman and computer scientist, she seeks to use technology to positively transform the life of the African society and businesses.

When she was 24 years old, she founded OpenWorld, a software consultancy firm in East Africa, which is today one of the leading electronic administrations on the continent. This organization, which has become established as an open source centre, is involved in some of the most utilized web and cloud applications in Africa, such as ARIS, used by the 54 member states of the African Union, or OpenBusiness, a revolutionary cloud-based business management tool.

In a region plagued by gender inequality, Dorcas Muthoni has strived to overcome social challenges associated with women’s participation in computer science, and she has done so by using her experience gained to provide advice and guidance to women and girls in ICT.

In this line, she founded the organization AfChix, an initiative for tutoring and the creation of skills in the computing field for women and girls. Since 2004, this organization has promoted conferences and meetings and has facilitated careers in computing and continuous training for these people. Her passion and involvement have become a role model for these generations.

Previously, Muthoni worked in the creation of the Kenyan education network, where she provided technical leadership (network infrastructure planning, project management and the creation of capacities for member institutions). Her work turned the KENET network, a pioneering research and educational initiative in Africa, into a reality providing a common digital infrastructure to over 30 universities and research institutions throughout the continent.

She has received numerous international awards in recognition of her career, such as the Anita Borg Institute for Women and Technology’s Change Agent award (2008). She was also elected Women’s Forum Rising Talent (2009), a network of women with great talent and potential to become influential figures in the future, and chosen by the Young Global Leader of the World Economic Forum (2013), a panel of distinguished leaders from around the world under the age of 40.

> Gallery of images from the investiture ceremony

> Video summary of the ceremony