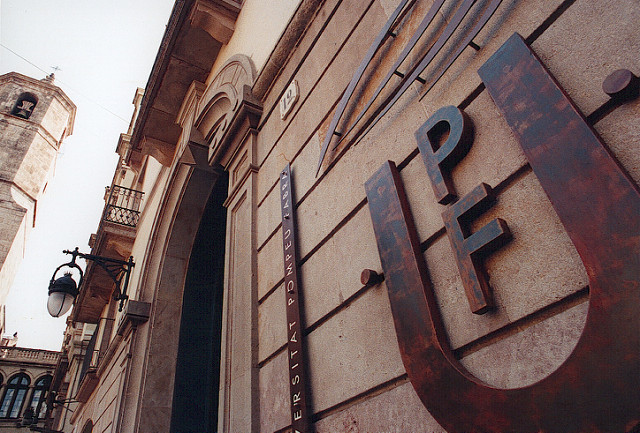 On 18 June 1990, Catalan Parliament gave the go-ahead for the creation of a new public university in Catalonia, Pompeu Fabra University, inspired by the principles of freedom, democracy, justice, equality, independence and plurality. From its beginnings, this young academic institution set itself two main objectives: to train responsible professionals and citizens fully committed to civic values, and to contribute towards the development of outstanding research.

The first lectures at UPF were given on 8 October 1990 in Balmes building, once the site of the Fòrum Vergés. They were attended by around 300 students of the new degrees in Law and Economics and Business Sciences. Today, UPF offers its studies around three areas of knowledge: the social sciences and humanities, the health and life sciences, and the ITC and communication sciences. To develop its activity, the University has been structured into seven schools, a Polytechnic School and eight departments. Meanwhile, in recent years UPF has also been participating in a set of institutions and specialized centres focused on teaching, research and transfer activities, centres with legal personality and that constitute the UPF Group.

Moreover, in order to promote research and transfer activities undertaken by university researchers and provide them with greater international visibility, the University has developed the UPF Research Park in the fields of social sciences, humanities, communication and information technologies. The UPF Research Park, which develops its activity at Ciutadella and Poblenou campuses, coordinates its activities in the fields of health and life sciences with the Barcelona Biomedical Research Park, located at Mar campus.

Thus, thanks to the development of these three campuses and science parks, the University has contributed to the regeneration of some areas in Barcelona as well as the promotion of new areas of creation and transfer of knowledge. Examples of this activity can be found, for example, in the rehabilitation of the Dipòsit de les Aigües, the current Library, or in the former army barracks in Wellington Street, nowadays occupied by the Barcelona Graduate School of Economics and the Pasqual Maragall Foundation (Ciutadella campus). Also, through the opening to the sea in the nineties, with the Olympics and the regeneration of the Vila Olímpica (Mar campus) or the regeneration of Ca l'Aranyó, the old textile factory placed in [email protected] (Poblenou campus). We should neither forget the building in plaça de la Mercè, headquarter of the Rector's office, in Ciutat Vella; the Born building, that hosts the UPF Foundation, or the Balmes building, main building of UPF Barcelona School School of Management, among others.

Finally, as regards the governance of UPF, Dr. Enric Argullol served as rector from its foundation until June 2001. At the end of his mandate, the University Senate elected Dr. M. Rosa Virós, who led the government of the University until May 2005. From then on, in accordance with prevailing legislation, the position of rector of the UPF would be elected by the university community through direct elections and universal suffrage, free and secret. The winner of the first elections held in May 2005, was Dr. Josep Joan Moreso, who would be re-elected in February 2009, followed by Dr. Jaume Casals (2013-2021). The current rector, Oriol Amat, was elected in May 2021.