The Barcelona Center for European Studies (BACES), a centre that will strengthen European  Union studies in Barcelona and Catalonia from a multidisciplinary perspective, was launched with a ceremony that included the conference “A Europe fit for the next decade” given by Viviane Reding, former vice-president of the European Commission and former European Commissioner for Justice.

The opening ceremony, which took place on 31 January at noon in the Mercè Rodoreda auditorium, was presided over by Pablo Pareja, vice-rector for projects related to faculty affairs (on behalf of the rector, who was unable to attend due to an institutional commitment), accompanied by Isabel Valverde, vice-rector for internationalization projects, and Ferran Tarradellas, director of the European Commission Representation in Barcelona.

Viviane Reding gave the talk “A Europe fit for the next decade”, in which she addressed the major current and future challenges of Community organization.

Also in attendance were the UPF professors Javier Arregui (Department of Political and Social Sciences), Jean Monnet chair in European Governance, and Fernando Guirao (Department of Economics and Business), Jean Monnet chair in European Economic History, co-directors of BACES, as well as other professors, students and members of the University community.

During the first part of the event, Pablo Pareja gave an introduction to Viviane Reding, who is currently a member of the Parliament of Luxembourg, highlighting her major contributions to the promotion of the European project and fundamental freedoms, from the different positions and posts she has held throughout her career.

The vice-rector particularly stressed the milestones Viviane Reding has achieved in very different areas, which have led to the improvement of the situation and quality of life of the citizens of the European Union: data protection, the end of roaming, the momentum of the Erasmus Mundus programme, the common market for telecommunications, cultural diversity and gender equality, among others.

Following a presentation of BACES by Javier Arregui, Viviane Reding gave her talk during which she dealt with the major current and future challenges of Community organization: from Brexit (which she dubbed ‘bad news’ for both the UK and for the EU, which will not be easy to manage) and the arrival of refugees, to data management and regulation, as well as upholding the values of the EU, especially the common market. 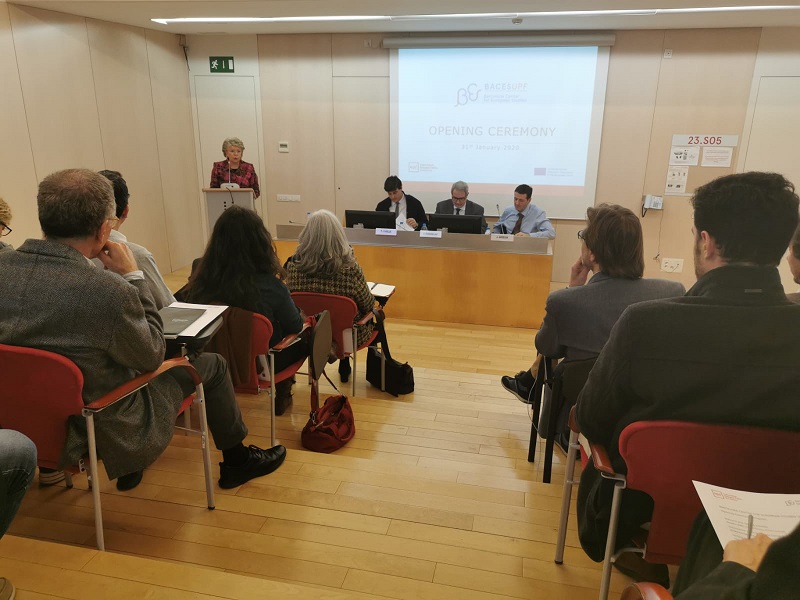 Viviane Reding delivered one very strong message: European citizens (especially young people) should ask the people representing them to act in anticipation of the challenges before us, “because the Europe of the future must be built now, just as today’s Europe is the result of past mistakes and successes”. In her opinion, we must act with the ambition of creating global standards: “We need to decide whether we want to be ‘makers’ or ‘takers’”, she stated.

“The Europe of the future must be built now, just as today’s Europe is the result of past mistakes and successes”.

“Some of the challenges of the future are old acquaintances”, Viviane Reding assured, such as climate change, the abuse of personal data, discrimination against women, the active defence of fundamental rights, and human stupidity. Throughout the talk, she gave examples of her personal struggles, from the political sphere, against all these ills, but “the fight can never be deemed over”, she stressed.

The last part of the ceremony included two performances by the UPF Choir, who rendered the popular university anthem Gaudeamus Igitur and Ode to Joy, the official anthem of the European Union. In between the two pieces, Ferran Tarradellas, director of the European Commission Representation in Barcelona, featured in the Flag Ceremony, which consisted of presenting a European Union flag to the Barcelona Center for European Studies, which was collected by its directors, Javier Arregui and Fernando Guirao. 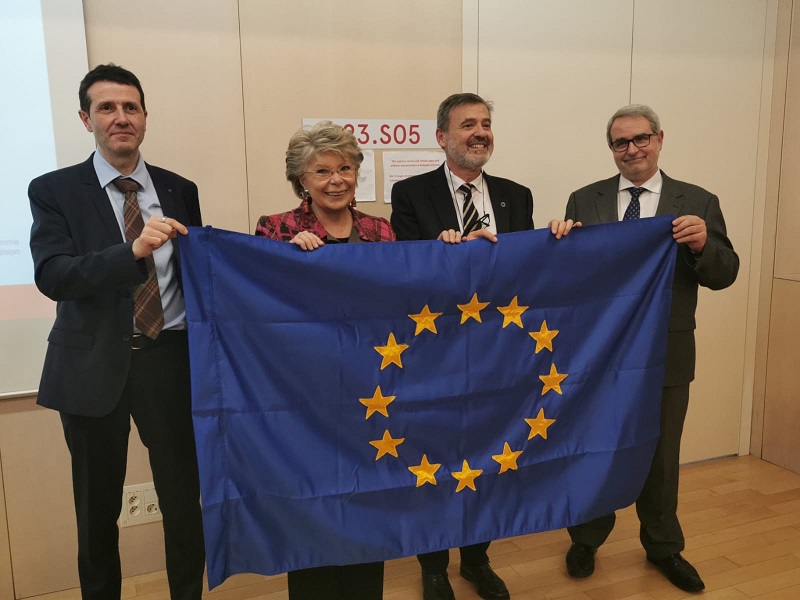 The Barcelona Center for European Studies (BACES) was created by the European Commission in September 2019 and will be hosted by UPF, with the goal of building a permanent multidisciplinary centre in Barcelona and creating a unique, stimulating environment for research and learning with implications in the local, national, regional and international spheres.

One of its main missions is to support the University’s two Jean Monnet Chairs, led by Javier Arregui and Fernando Guirao. In addition, the centre will have a further two researchers (Marie Therese Wilhelm and Clement Perarnaud), two research fellows, and probably, in the short term, one Juan de la Cierva and one Ramón y Cajal researcher.

It will include teaching, research and knowledge transfer activities in the fields of EU politics, economics, history and law.

BACES, which will be located on the fifth floor of the Mercè Rodoreda building on the Ciutadella campus, will have its own organization and infrastructure that will serve to strengthen European Union studies from a broad, multidisciplinary perspective. It will include teaching, research and knowledge transfer activities in the fields of EU politics, economics, history and law.

Some of the centre’s main objectives are to promote innovative study and research into the EU among the teachers, students and graduates of the University; to promote the training of future generations of students and experts in EU studies; and serve as a forum for debate on EU affairs that promotes awareness and the exchange of ideas between disciplines and generations.

To achieve these goals, BACES, which is designed as a think tank, will promote the quality of courses offered and of the research conducted; it will attract talent, including researchers, experts, students and policy makers; it will disseminate top-tier research, and it will encourage regular dialogue between policy makers and academics on EU-related issues.

Some of the actions already planned include the creation of the BACES Working Papers Series, a tool to promote and give continuity to the research carried out at the centre; the organization of a season of BACES seminars (three per academic year) to discuss current EU issues, and a series of inter-generational dialogues, which will give students the opportunity to interact with senior EU officials and politicians. Precisely on the day before the inauguration, 30 January, Viviane Reding attended a meeting with undergraduate and postgraduate students at what was the first European dialogue promoted by BACES.

Viviane Reding (Esch-sur-Alzette, Luxembourg, 1951) has spent most of her career at the European Commission and the European Parliament. She studied Humanities at the Sorbonne in Paris, and later majored in Journalism. Between 1978 and 1999 she worked for the newspaper Luxemburger Wort, and between 1986 and 1998 she directed the Luxembourg Union of Journalists.

In 1992 she was awarded the Cross of St. George by the Government of Catalonia. Other awards she has received are the Gold Medal of European Merit (2001), the Robert Schumann Medal (2004), the Prince of Asturias Award for International Cooperation (2004), and the National Order French Legion of Honour (2005), among others. She has been awarded an honorary doctorate by the universities of Taiwan Chen Hu, Degli Studi of Genoa, the Sacred Heart of Luxembourg, and Glasgow.