Marianne Bertrand: “We should strive to improve the allocation of talent to society, whether male or female”

Marianne Bertrand: “We should strive to improve the allocation of talent to society, whether male or female”

On 13 October, the professor of Economics at the University of Chicago Booth School of Business gave the inaugural lecture for the 2021-2022 academic year at the UPF Faculty of Economics and Business, entitled “Gender inequality in the labor market”. 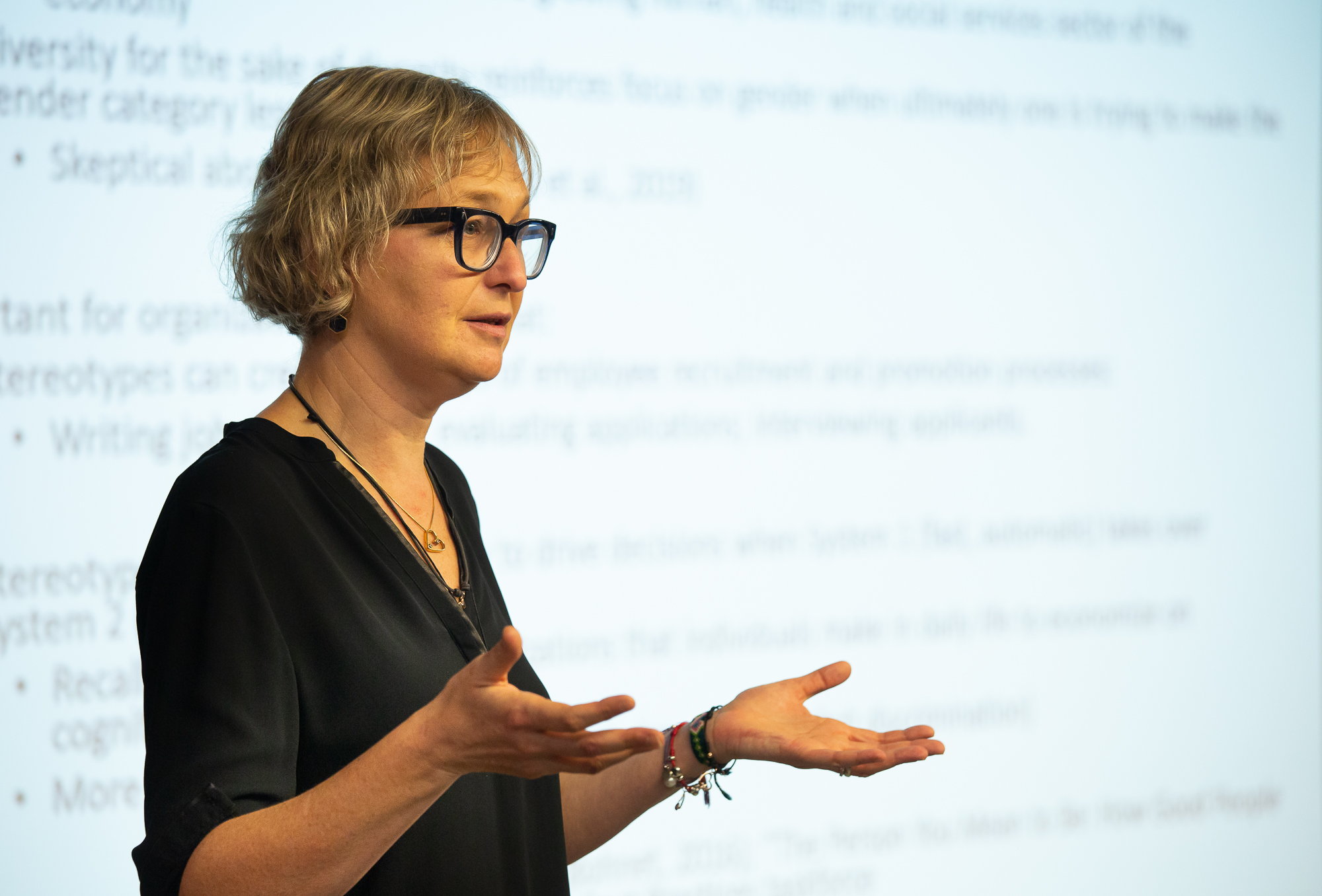 “Despite the existing deep concern, in these difficult times we are enduring, due to the increase in inequalities in different axes and the decrease in social mobility, there is a constant progression towards greater gender equality, with all the key indicators looking positive. But we need to pay attention to some worrying signs of renewed gender conservatism”.

With this message of both optimism and prudence, Marianne Bertrand, Chris P. Dialynas professor of Economics at the University of Chicago Booth School of Business (USA), began her inaugural lecture, which titled “Gender inequality in the labor market”, kicked off the new academic year of the Faculty of Economics and Business at Pompeu Fabra University.

This 2021-2022 academic year, of the 750 students who are beginning the five degree courses taught at the Faculty, 53% are women

The academic ceremony, held on 13 October in the auditorium of the Ciutadella campus, was presided over by Oriol Amat, UPF rector, who delivered a few opening and closing words, and was attended by Walter Garcia-Fontes and Daniel Serra, dean and director of the Faculty and of the Department of Economics and Business, respectively.

In his opening speech the rector, Oriol Amat, a full professor of Financial Economics and Accounting at the University, pointed out that this year he will be teaching the subject Financial Statements Analysis at the Faculty: “Teaching is my vocation and one of my favourite academic tasks, especially because I think it is essential for this new role as rector to continue to be in direct, personal and close contact with you, the students”. 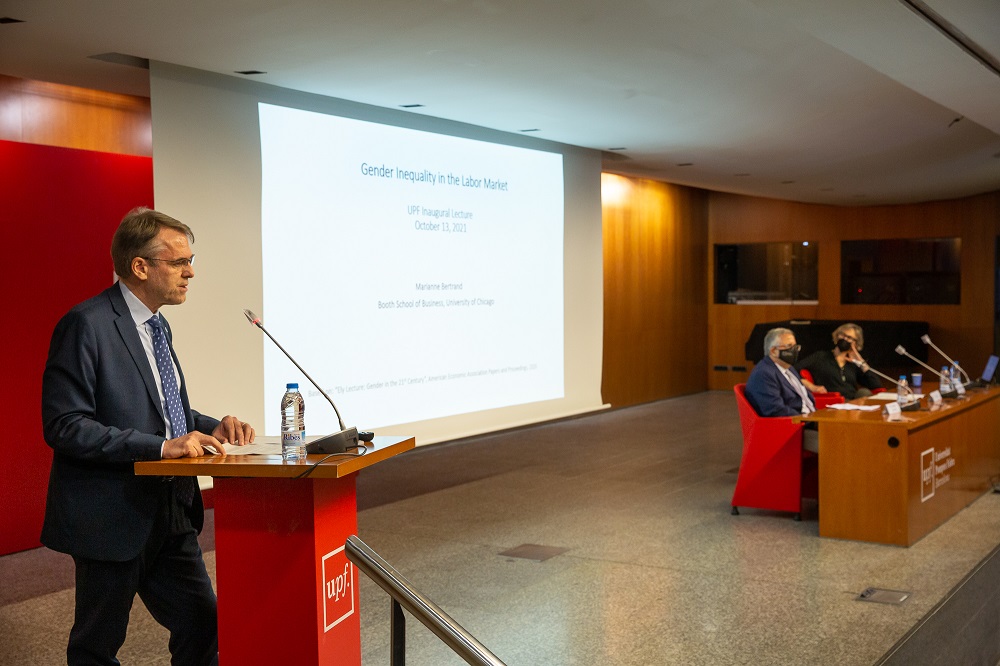 The rector stressed that this 2021-2022 academic year, of the 750 students who are beginning the five degree courses taught at the Faculty, 53% are women: “We see that at least in studies in the field of economics and business at UPF there is no gender gap when entering the University”. Also, with regard to the University as a whole and without departing from the field of the degree, last academic year, 61% of the students were women compared to 39% men.

According to Oriol Amat, who stated that the glass ceiling is a reality in most universities in Western Europe, the problem comes later: “After the postdoctoral stage, the transition to leadership roles is skewed, with just some 31% of women achieving a permanent teaching position at UPF”. Therefore, “we need to strengthen the University’s gender policies to achieve effective equality, and I am fully committed to this goal. UPF’s Second Equality Plan reaches its end in 2022 and so we will conduct a new analysis and pass a new plan, according to current needs”.

> Video summary of the inaugural lecture

Oriol Amat gave the floor to Marianne Bertrand’s inaugural lecture, in which she emphasized that in addition to her links with the University of Chicago, she is a researcher at the National Bureau of Economic Research, the Center for Economic Policy Research and the Institute for the Study of Labor, and an expert in the fields of labour economics, corporate finance and development economics, among others.

Professor Bertrand pointed out that in recent years there has been an improvement in the various indicators regarding gender equality in the labour market and a reduction of the gap in this field: “There is steady progress throughout the world in terms of women’s access to the workforce, and also a reduction in the gender gap in the progress and schooling of girls”. However, she warned that this positive process has been hampered by the covid-19 crisis, which has led to lower female, compared to male, employment in the vast majority of countries, with women with children being clearly penalized.

According to Marianne Bertrand, who cited Denmark as an example of one of the societies with the highest degree of gender equality (the gender differences that still persist are related to children), there are two key factors that hinder the ideal of “equal pay for equal work between the sexes”: the continuing gender differences when making educational choices and the marked gender differences in labour market sanctions associated with fatherhood and motherhood.

One of the areas where the speaker placed the most emphasis was on the existing gender stereotypes in society, which she considers to be “guilty” of many of these factors that hinder full equality, and which determine gender-specific skills and roles. In her opinion, some of the areas from which these stereotypes must be fought are research, the media, education and public policies: “We need a more persuasive role on the part of policy makers and educators and a design of gender policies that make it easier for women to reconcile work and family life”, she asserted.

She also mentioned the need to work from within organizations, which must bear in mind that stereotypes can appear in any of the steps of employees’ recruitment and promotion processes, and that there is a need to focus more on the individual than on the group: “There are fewer and fewer excuses for the phrase ‘he or she isn’t a good fit”, she assured. In this regard, she called for women to take advantage of the flexibility that new post-covid jobs may give women, although they must be complemented with greater involvement by fathers in childcare and household chores. 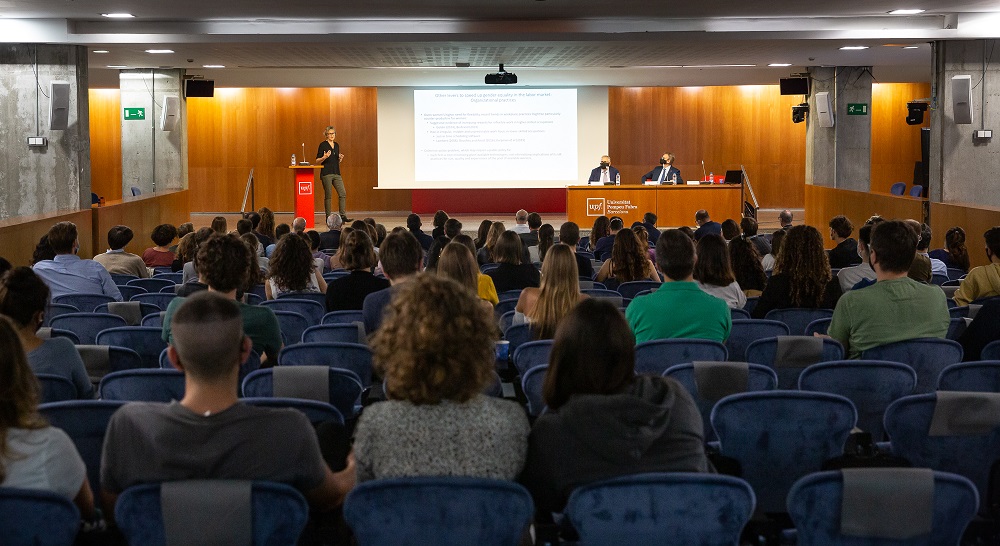 Regarding the relationship between the disciplines of economics and social psychology, professor Bertrand believes that they can enrich each other: “Social psychology has played a major role in the transformation of the economy over the last thirty years, and has greatly helped to better understand and predict human decisions. I believe that social psychology is an area from which we have a lot to learn and we must try to incorporate it in our research and articles and in the understanding of the world”.

Speech by the dean and rector’s closing speech

Right at the end of the ceremony, Walter Garcia-Fontes, dean of the Faculty of Economics and Business, gave a speech in which he welcomed the new generation of students, the class of 2021-2024 , and the other students of the Faculty: “I would like to highlight once again the privilege that the entire community of the Faculty has to be in a public university of the highest quality, which hires its teaching staff competitively and on an international scale, and which boasts administration and services staff with utmost dedication and efficiency. The students who choose this faculty are also the most outstanding in our environment, as our bachelor’s degrees demonstrate year after year”, he stated.

However, he reminded those present that this privilege is also a commitment on the part of students to take advantage of all the resources available to them during these years of university life: “Entering the job market before time comes at a greater price than the benefit it brings. If you need scholarships so that you can be fully dedicated to your studies, you can count on me and our teaching staff to assist you if you have to fight for them”, he urged.

Finally, the rector Oriol Amat delivered a few closing words, in which he invited students to participate in the wide range of extra-academic and participatory activities that the University offers, finally declaring the 2021-2022 academic year of the Faculty of Economics and Business open. 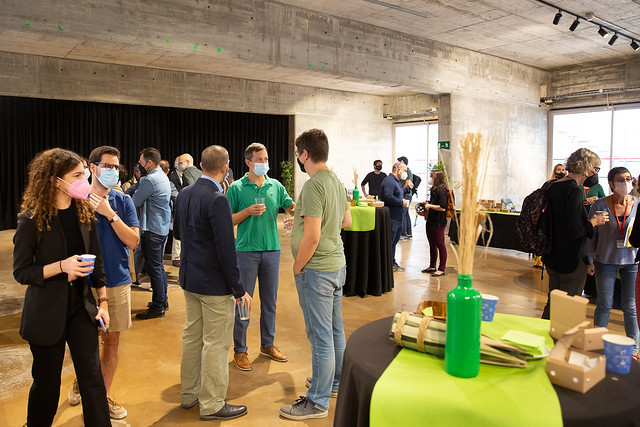