NOTICE: We have a newsletter in Catalan, where we give you project updates and discuss the relation between science and activism. Click here if you would like to receive it. It will finish towards the end of the year!

The main aim of this project is to use empirical research in order to investigate and improve citizen empowerment in the context of public health implications of environmental pollution and conflict. The project examines a specific type of citizen empowerment that arises out of a process of knowledge co-production between citizens and scientists, a process termed Activism Mobilising Science (AMS). AMS is used by citizen groups in order to understand and confront the impacts of pollution, and acquire visibility and legitimacy.

Citizens are searching for alternative avenues in order to express their views, demands and knowledge acquired, in a participative and constructive manner. There are however, several unanswered questions about how exactly this empowerment is generated, the impacts of power imbalances (inside and outside the process), and if and how the process could be generalised or replicated in other cases. As an extension of this process, the project also integrates deliberative decision-making tools and methods in order to improve the transformational capacity of public decision-making processes related to public health controversies.

The project will involve in-depth case study research of an AMS process in the context of a well-established health-environmental controversy in Catalonia, the salt waste-pile of Sallent (‘el cogulló de Sallent’). Since the 1920s there has been an environmental and public health controversy due to the high salinity in the Llobregat River caused by potash mining in the Bages region. Working together with scientists and lawyers some local groups opposing the project have been co-producing new knowledge that has been presented as evidence in numerous court cases, making this an illustrative case for studying AMS. 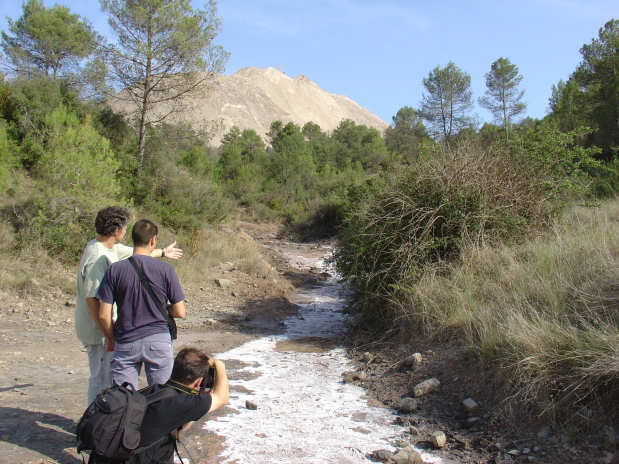 Activism Mobilising Science or AMS (Conde, 2014) looks at how lay people and scientists liaise to co-produce new scientific knowledge with which to challenge knowledge produced by other powerful actors generally in the context of environmental and health controversies. These are:

The Llobregat River in Catalonia has been receiving salts from potash mining since the 1920s and has resulted in the salt waste-pile of Sallent (‘el cogulló de Sallent’) and other waste-piles in the Bages district (‘els runams’). Local groups have been denouncing the environmental and public health implications of potash mining for decades sparking conflicts between different groups and districts (‘comarques’) in the region.

On one hand water salinity provides the components for the formation of Trihalomethanes (THMs) that are associated with several types of cancer (Gorostiza and Saurí, 2017). In order to comply with this limit the regional water agency has put in place costly purification systems in accordance with European regulations setting new limits of THMs. Much earlier in 1988 a brine collector was built (see Gorostiza, Honey Roses, Lloret, 2015) that transports high salt brine from the mines directly to the sea. This collector has, however, broken more than 400 times since its construction and a new one is being planned as part of an ambitious plan to recover the waste-pile of Sallent. The cost to the public purse of these measures is thought to be on more than 400M€.

HOW ARE WE GOING TO DO IT?

a) An institutional-historical analysis of the process, potential and limitations of AMS. We are going to focus on the activism that took place from 90s until now through semi-structured interviews with key actors.

b) Contemporary knowledge co-production field labs with experts and local groups or citizens engaged in the conflict.

c) A deliberative forum that will include all those actors with a stake in the issue and will test the capacity of AMS to empower citizens to participate in deliberative decision-making processes and modify institutional action.