The current Expo Shanghai, whose theme is "Better city, better life", includes a new area on the best urban practices. Since Barcelona was a guest for this area of the exhibition, at the Barcelona pavilion the entire world has been able to witness the sheer scope of the only two urban regeneration projects mentioned: Ciutat Vella and [email protected]

Although the involvement of UPF has been vital to both projects, the University played a leading and decisive role (through the [email protected] municipal corporation) in transforming the rundown industrial neighbourhood of Poblenou (the former Manchester of Catalonia) into the current [email protected] district of innovation, epitomising the change in economic model brought about at the turn of the 21st century by the transition from the industrial economy to the knowledge economy. The outcome has been to forge a quality academic, scientific, enterprising and innovative environment with an international calling and which is fully integrated into society.

Pompeu Fabra University has done more than embark on occasional activities relating to its local environment, for instance, engaging in active relations with local social institutions, and setting up museums and university residences; rather, it has excelled itself inventing and creating an urban environment of the highest quality offering greater ecological efficiency and striking a balance between the business activities and university life unfolding side by side with neighbourhood life. The concern for ensuring excellent architectural quality has been acknowledged in numerous awards for architecture and urban development granted for the refurbishment of existing buildings and the construction of new ones.

UPF will continue to endeavour along these lines, strengthening its involvement in a sustainable economic model with a proven track record in terms of efficiency.

Indeed, the ever-increasing rate at which new companies are being established and jobs requiring high qualifications being created in the [email protected] district is proof of this, constituting one of the possible ways of coming out of the most severe financial downturns of the last years. The integration of three scientific parks pertaining to UPF on the same campus is a further step on the road to integration into the local environment. The University has been a key player in lending the local area a new lease of life and it will continue to work with the public authorities in order to consolidate Barcelona's standing as a leading platform for innovation and the knowledge economy on an international level. Indeed, it is for good reason that Barcelona has earned renown as "the city of knowledge".

UPF, the history of an urban campus

On the 18th of June 1990, the Catalan Parliament passed a law setting up for the fourth public university in Catalonia: Pompeu Fabra University. Twenty years later, the UPF's urban campus has become one of the main features of its identity.

In the course of these twenty years, the University has gradually spread across Barcelona, mainly in the Eixample, Ciutat Vella and Sant Martí districts. The refurbishment of emblematic buildings belonging to the city's architectural and historical heritage, together with the construction of new facilities, has given Pompeu Fabra University the vocation for becoming the Catalan capital's urban university par excellence, thus strengthening its commitment to revitalise the city's neighbourhoods.
Below, we invite you to take a journey through the architectural heritage of the UPF's urban campus (click the icon on the right).

You can also see the presentation of the future UPF Research Park (Power Point). 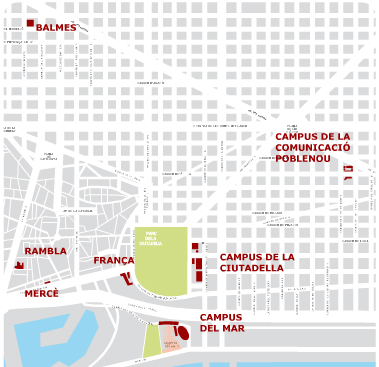