THINKClima member Jose A. Moreno presented a paper at the Climate Change Communication Conference at the University of Sevilla in October 28th, 2022

The paper presented at the Climate Change Communication Conference by Jose A. Moreno is entitled "The role of the press in the reproduction of discourses against climate action by think tanks in the UK, Spain and Germany". This paper presents results of the author's ongoing thesis. The conference has been organized together by the University of Sevilla and the Complutense University of Madrid, and was held in Sevilla on 27th and 28th of October, 2022. 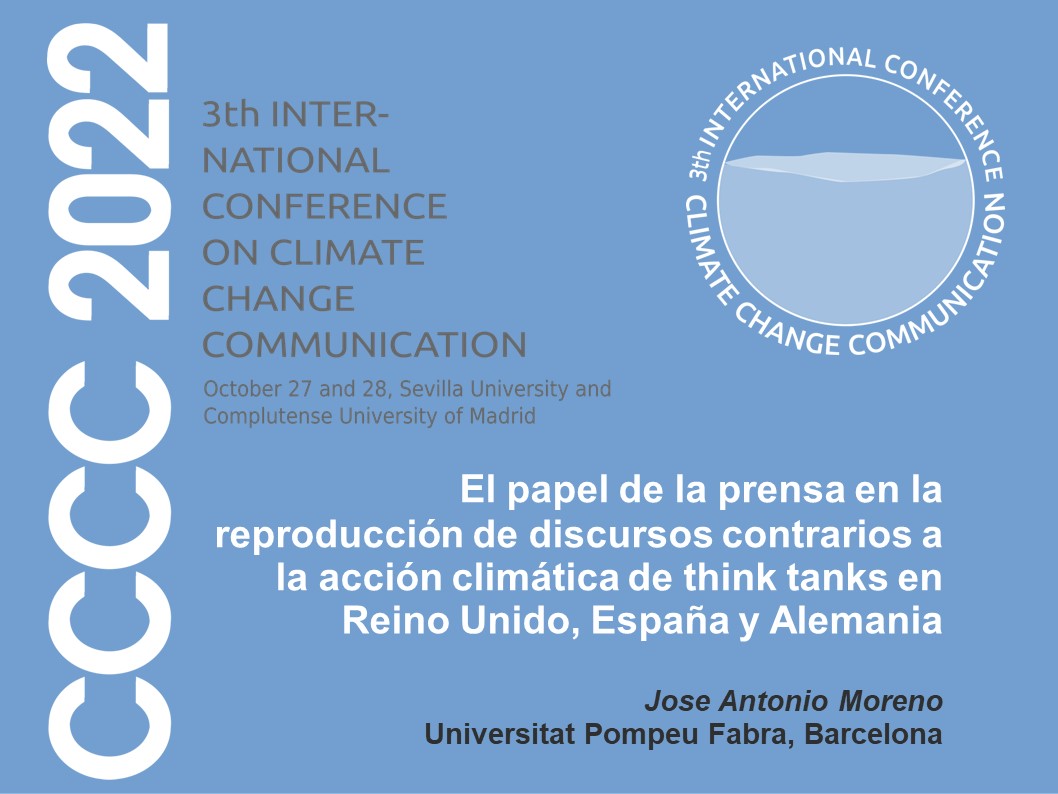 Think tanks are knowledge-generating organizations that seek to influence political decision-making and, therefore, also the media and public opinion. We know that certain conservative think tanks have played a relevant role in the movement against climate policies in the United States. We are also beginning to have academic knowledge about the anti-climate action discourses of such think tanks in Europe, but we do not know how influential they are. Measuring the influence of climate action contrarian think tanks is a complicated, if not methodologically impossible task. However, we can look at indicators such as media presence. The present research is based on original results of an ongoing doctoral thesis on the press coverage of 13 European think tanks opposing climate action. The period of analysis runs from the founding of each think tank until December 2020. Among the 13 think tanks selected, five of them account for 95% of the mentions in all European press available in Factiva in the period analyzed: three British (the Global Warming Policy Foundation, the Institute of Economic Affairs and the Centre for Policy Studies), the Spanish Instituto Juan de Mariana, and the German EIKE (Euroäisches Institut für Klima und Energie). First, this paper shows the results of a content analysis of more than 1,500 texts mentioning these five think tanks. In particular, it has been checked whether the press reproduced the ideas of these organizations, criticized them, or were neutral. Next, the result of the analysis of a sample of mentions reproducing the discourse of the think tanks (about 1,000 texts), on which a framing analysis was carried out to see which arguments against climate action predominate. This research includes a discussion on the role of journalism in the face of the climate crisis. Specifically, on the role of the press in the reproduction of discourses favorable to polluting elites, as is the case with the ideas disseminated by think tanks against climate action and reflected in the European press.