A study with this new hypothesis was published on September in the journal Frontiers in Physiology that was led by Jérôme Noailly, Carlos Ruiz Wills and Miguel A. González Ballester, all members of BCN MedTech, as co-authors, together with researchers at the University of Oulu in Finland

The intervertebral disks are cartilaginous pads that separate each of the vertebrae of the spine thanks to which the vertebrae are held together and enjoy a certain degree of mobility. Disk degeneration depends on many factors and when treating or preventing the disease, great difficulty lies in identifying specific mechanisms or sequences of the destruction of the disk tissues to find efficient therapeutic targets.

The intervertebral disk is the largest non-vascularized organ in the human body and the survival and anabolic activity of its cells depends on the diffusion of glucose from the peripheral blood vessels to within the disk. Based on the premise that a thin layer of tissue (less than one millimeter thick) called the cartilaginous endplate, between the intervertebral disk and the vertebrae, may be subject to a process of early degradation, the nutrition of the disk cells could be compromised by static mechanical loads and lead to clinically significant degenerative processes, according to a theoretical study published on 19 September in the journal Frontiers in Physiology providing a novel view of the process of intervertebral disk degeneration.

The study was carried out by Jérôme Noailly, with Carlos Ruiz Wills and Miguel A. González Ballester (ICREA), researchers at BCN MedTech of the Department of Information and Communication Technologies (DTIC) at UPF, in collaboration with researchers from the University of Oulu (Finland).

Cartilaginous endplates are layers of cartilage that are located at the top and bottom of the disk and are one of the main routes for the diffusion of glucose for the nutrition of the cells that make up the intervertebral disk. To date, it had been considered that sclerosis of the adjacent bone plate was responsible for the decline in the diffusion and nutrition of the cells of the disk. However, several pieces of experimental and even clinical evidence are not usually compatible with this hypothesis.

For this reason “we assess how moderate changes in the composition of the cartilaginous endplates could affect the nutrition of the disk and cell viability in the degeneration of the intervertebral disk”, explain Carlos Ruiz Wills and Jérôme Noailly, first author and principal investigator of the study, respectively.

A model of cartilaginous endplate

The researchers have developed a model of cartilaginous endplate with a new formulation of permeability based on the composition of the plate. Representing the peripheral blood vessels in the intervertebral disk, the outline of the model is fed by set concentrations of solutes (glucose, oxygen, lactate) involved in the simulated nutrition of the cells in the entire disk by a metabolic model. In the model, in addition to the interaction between the diffusion of nutrients and the metabolism of the disk are mechanical deformations, calculated for various daily mechanical load cycles which correspond to periods of rest and moderate physical activity.

Based on this model, the authors have shown that the permeability of the cartilaginous endplates increases with the degeneration and ageing of the tissue, according to the in vivo studies. But moreover, “our results indicate that the degeneration of the plates may be responsible for the dehydration of the nucleus pulposus (see image), the central part of the disk, which is gelatinous in nature, which resists and redistributes the vertebral compression forces thanks to the water  it contains- under a mechanical load.

This mechanical load causes the water in the nucleus to escape via the degenerated plate, and locally, the porous structure of the dehydrated core to collapse. This collapse would particularly affect the levels of oxygen, lactate and glucose near the annulus fibrosus, a fibrocartilage that surrounds the nucleus, controls a large part of disk deformations when bending and twisting actions of the trunk are performed, and prevents the material that makes up the nucleus pulposus from escaping (herniated disk).

This theoretical study questions the current paradigm that usually attributes the cause of cell starvation in the disk to calcification and suggests an alternative way for understanding the degeneration of the intervertebral disk; a new approach in which the early degradation of the cartilaginous endplates plays a major role.

“On the one hand, the possible collapse of part of the healthy nucleus pulposus and the biological damage of the annulus fibrosus due to the nutritional stress of the surrounding cells, subsequent to an initial problem in the cartilaginous plates, would explain that the herniation of the annulus is not always a consequence of the degeneration of the nucleus. On the other hand, the simulations carried out provide rational mechanisms that might explain why disks with signs of degeneration of the cartilaginous plates tend to suffer earlier, more severe degenerative processes, pointing to these cartilaginous plates as an important possible therapeutic target”, explains Jérôme Noailly. 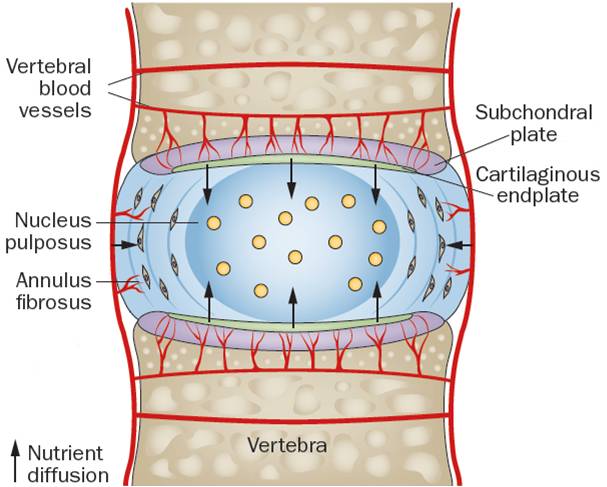