Back 25th anniversary of the MTG

In 1994 Xavier Serra joined the Universitat Pompeu Fabra and assembled a small team of researchers to work on music technology. Soon after we decided to name ourselves Music Technology Group.

The origins and evolution of the MTG are linked to a number of institutions that have shaped what we are. Our seed was the Phonos Foundation and the trigger was its integration into the Audiovisual Institute (now extinct) of the UPF. Then, the MTG became one of the founding groups of the Department of Information and Communication Technologies, of which we are an integral part. But the development of the current MTG has been a long journey which has been the result of the many people that have worked and collaborated with us. 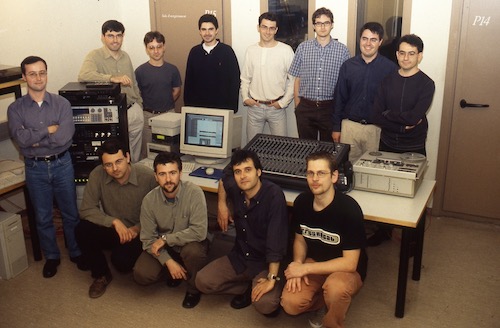 The MTG was born in the context of the Audiovisual Institute and the School of Audiovisual Communication, both created at the UPF in the early 90s. This was not an engineering nor a research-centered context, so it took sometime before we could start doing competitive research. We started with some funding from the Generalitat de Catalunya and we got the first major projects in 1997, one contracted by Yamaha and another funded by the EU. The creation of the Department of Information and Communication Technologies in 1999 was an important step in having a better context to support and develop our research goals. With the DTIC we started a PhD program and, when the Bolonya education reform took effect, we started a Master program, which became in 2008 our current Master in Sound and Music Computing. We could say that by 2008 we had reached our current education and research context, including our current size.

Since 1997 we have succeeded in always having active EU and industrial projects to support our research, thus being able to continuously fund a significant number of researchers, PhD students, and postdocs. In time we were also able to consolidate some faculty positions, which resulted in the creation, in 2015, of four distinct labs.

It took some time to mature, for example, the first PhD thesis were not defended until 2005, but since then, every single year we have had significant outcomes, including several PhD thesis each year (a total of 56 PhD thesis have been successfully defended).

In all these years, around 170 people have worked at the MTG (support staff, researchers, PhD students, and postdocs), 210 students have graduated from our master, and many undergraduate students plus visiting researchers have done projects with us. All these people are the ones responsible for our 1300 publications and for successfully carrying out all the work, including 39 EU projects, 12 national projects, and many industrial contracts. Also relevant are the 4 spin-offs that have been created.

We claim that the MTG is more than an academic research group. By wanting to be in intersection of music and technology it required us to be active in many different fronts, promoting research approaches from both scientific/technological and humanistic/artistic disciplines and developing activities that go beyond what a typical research group does. In these 25 years the MTG has been the home for people from diverse academic backgrounds and interests. We have been an open environment in which many students and researchers have grown, have left their imprint, and have moved on to develop successful professional careers outside the MTG.

We have created a fruitful music technology ecosystem in Barcelona and its impact is found worldwide. Former members and master alumni are active in a wide variety of professional activities all around the world and this is what justifies the existence of the MTG.