The interplay between channels, receptors and progesterone facilitate the transport of eggs in the Fallopian tubes - News

The interplay between channels, receptors and progesterone facilitate the transport of eggs in the Fallopian tubes

The interplay between channels, receptors and progesterone facilitate the transport of eggs in the Fallopian tubes

The study, led by Miguel Angel Valverde, has been published in Science Signaling. 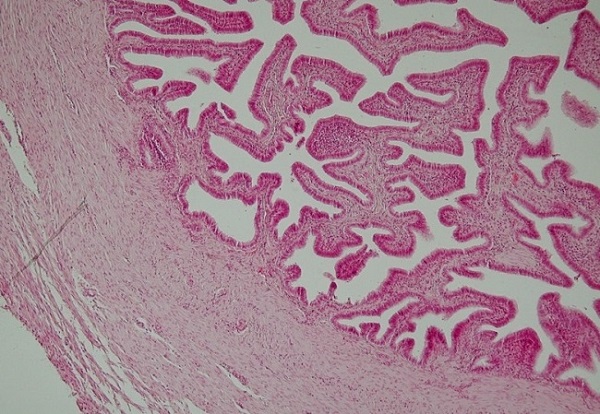 The Fallopian tubes (also known as oviducts) are two long narrow tubes connecting the ovaries to the uterus. They play an essential role in egg transport, fertilization and the early development of the embryo. Often the fertilization process occurs within these tubes, followed by the transport of the fertilized egg to the uterus. When the transport process is altered and a fertilized egg implants outside of the uterus, typically in the oviduct, an ectopic pregnancy occurs, which may put at risk the mother’s life. Therefore, it is of high interest to know the factors that control the transport of eggs through this narrow tube.

One factor that affects the function of the Fallopian tube is progesterone. Progesterone is a reproductive hormone. Its receptor, a protein expressed in tissues such as the uterus, ovary and cervix, binds to the hormone and sends signals that prepare women and their reproductive tissue for pregnancy. Progesterone is also present at high concentrations in the ovarian secretions into the oviduct and peritoneum. In the oviduct affects muscle and epithelial cells as well as sperm.

Early reports in the 1970s showed that progestogens accelerated the transport of eggs from the oviduct to the uterus, while more recent studies reported the slowing of oviductal CBF in response to progesterone.  “This apparent controversy called our attention to start investigating the role of progesterone in the oviduct” says Valverde.

The study is published this month in Science Signaling and involves researchers from the laboratories of Molecular Physiology at the Department of Experimental and Health Sciences (UPF) and the Pharmacology Unit at IDIBELL-Universitat de Barcelona. Many cells lining the airways and the reproductive tract contain projections called cilia, whose function is, in the case of the airways, brushing away foreign particles, pathogens and allergens. Failure of this ciliary action contributes to respiratory pathology. Similarly, the transport of gametes and embryos through the Fallopian tube also depends on ciliary activity. The propelling effect exerted by the cilia depends on different factors, one of the most important being an increase in intracellular calcium concentration and the subsequent acceleration of the ciliary beat frequency (CBF).  The Molecular Physiology Laboratory at the UPF has previously identified one of the key proteins that form the pathway for calcium entry, thereby, controlling ciliary activity.

The researchers first showed two different patterns of progesterone action in the control of CBF in ciliated oviductal cells: a short-term (non-genomic) effect characterized by the generation of Ca2+ signals and a rapid increase in CBF, and a long-term effect characterized by a decrease in CBF and the involvement of the classical progesterone receptor. 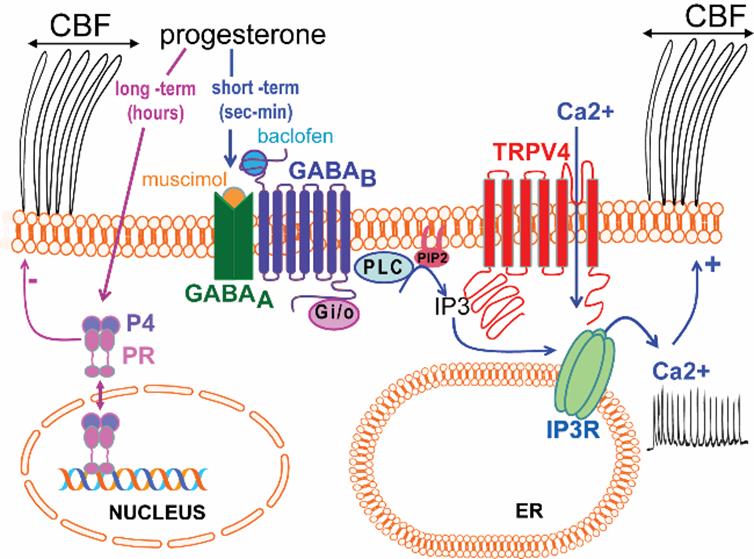 Second, they have delineated a novel molecular mechanism by which progesterone rapidly (short-term effect) increases intracellular Ca2+ and accelerates CBF, a mechanism that implies the stepwise activation of GABAA and GABAB to transactivate the Gi/o protein-coupled GABAB receptors and the generation of IP3R-mediated Ca2+ signals. Besides, researchers showed that in order to be functional, this mechanism requires the basal activity of the TRPV4 channel to provide Ca2+ influx in the close proximity of IP3R, thereby promoting the initiation and maintenance of the oscillatory Ca2+ signals necessary to accelerate CBF.

This research identified an unprecedented functional interaction of three membrane proteisn to accelerate cilia beating in response to progesterone: two types of receptors for a neurotransmitter typically associated to brain function (GABA) and an ion channel (TRPV4) with a prominent role in the regulation of ciliated epithelia. In addition, the study opens new lines of research for therapeutic possibilities to tackle dysfunctions of in the oviduct transport of eggs” says Valverde.