GenPlay: Generative Playscape
GenPlay is a classroom adaptable virtual environment created to foster free play through discovery and exploration of generative audiovisual content. The system has been designed especially for children with Autism to increase classroom integration.

As tools to diagnose ASD become more defined and Autism gains more recognition in the field of research for intervention disability technologies, many potential aids have been developed to ease the burden on children, parents, teachers, and other stakeholders. The use of ICT interventions are increasingly important due to flexible content customization, natural interaction, and easy integration into classroom and hospital spaces.

Although interventions for children with ASD have dealt with various aspects of the condition, such as motor control irregularities and difficulties in sensory processing, the current research primarily deals with the development of social behaviors. Previous research studies involving full-body interaction have increased our understanding of the relationship between ICT exploration and social behaviors in children with ASD.

Our goal is to orient the uses of technology in a participative and collaborative way that integrates ASD children into the classroom, ultimately fostering socialization in the classroom environment in order to facilitate social integration.

As classroom observation has revealed a lack of adequate educational support for school professionals, the principal motivation lies in supplying novel resources to the teachers of integrated classroom settings which will serve as a support for increasing inclusion during playtime activities. On a larger scale, this research project will be focused on the specific properties and evaluation of full-body interaction design of multi-user mixed reality environments created specifically for the classroom integration of children with Autism Spectrum Disorders through playful experiences. Therefore, we also aim to improve their understanding and adoption of social behaviors with peers and with society in general.

The main setting of the research is a large scale floor-projected virtual environment, which allows testing of interaction strategies and evaluation methods of experiences based on collocation of multiple users within a full-body interactive scenario, where they can use motor and gestural movements to practice interaction in a natural and uninhibited manner.

The visuals consist of special interactions with generative graphics based on particle systems, which can be interacted with or flow gently through the scene when left alone. Initially, particles emerge from the user and shift around the space, creating interesting effects when the two players come together. Users may collaborate to collect virtual objects with unique capabilities, such as changing colors, firework-like explosions, or acting as a net to capture nearby particles, behaviors which are of special interest to the children with ASD, with a higher emotional response to their environment.

The visual content and interactions were developed through participatory design sessions with local elementary schools. Children were invited to the lab to test an interactive prototype, and were asked to think aloud as they moved through the various interactions. Classmates were invited to participate through helping or providing suggestions to their peers. After playing the game, children were asked to draw their own version of the game, and act out how they would play in the system with a partner. Children presented their ideas to the group at the end of the session, which led to an increased understanding of children's perspectives on the experience. 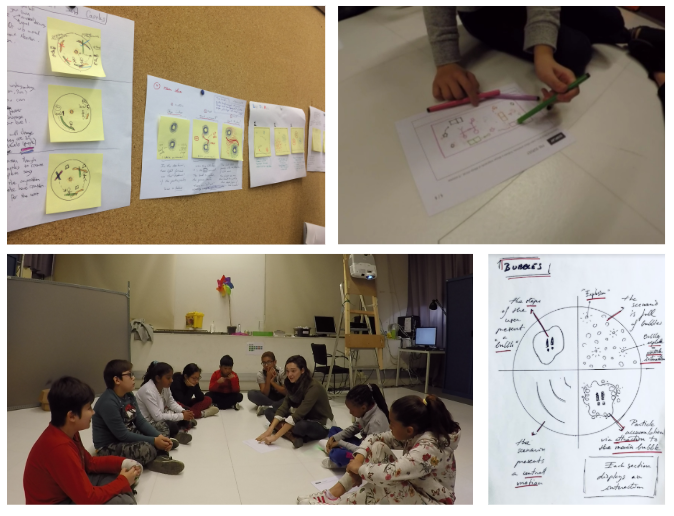 This project was developed in collaboration with a team of master students from the Cognitive Systems and Interactive Media program, and bachelor degree students from the UPF School of Engineering. Key to the project were the implementation of spatial audio feedback in a full-body interactive environment, and the use of generative elements in systems for autism.

The project was chosen as a semi-finalist in the CHI Student Design Competition and was presented at the CHI conference 2018 held in Montreal, Quebec.

Crowell, C; Sayis, B; Bravo, A; Paramithiotti, A. (2018). GenPlay: Generative Play Environment. In Proceedings of the 2018 annual conference on Human factors in computing systems - CHI ’18.