Freesound has published its activity and sustainability reports of 2020, that reveal an increase compared with the previous year

Freesound is the biggest website for sharing Creative Commons audio clips in the world. It contains all sorts of sounds, from field recordings to music instrument samples, foley, speech and music loops. The aim of Freesound is to provide audio building blocks to be transformed and combined into other sounds, and reused elsewhere. 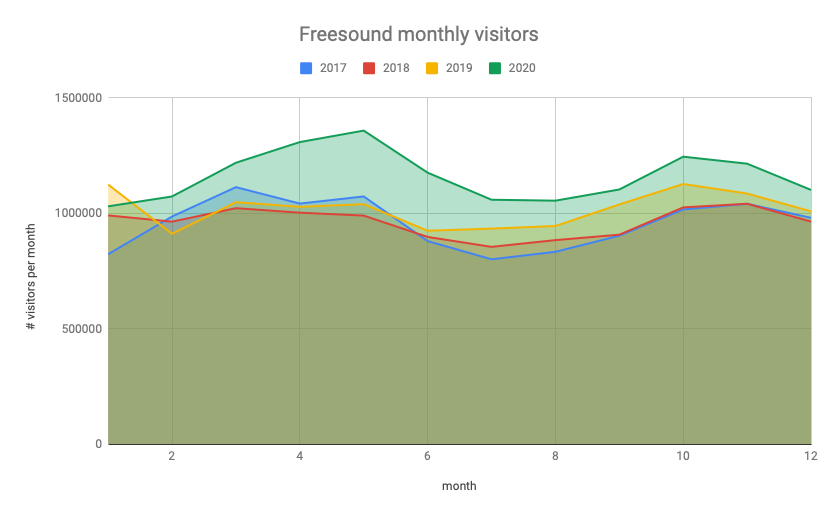 In 2020 there have been significantly more visitors than in the previous years, specially during the – almost worldwide – lockdown periods of Spring and Autumn. Furthermore, the number of donations was ~30% more than the previous year, which correlates very well with the increase of visitors and suggests that people have found Freesound to be a useful resource for them.

In terms of sustainability, sound uploads are an essential part of the sustainability of Freesound. Now that Freesound is reaching 500k sound uploads, it becomes even clearer its immense value, making Freesound an extremely useful resource, attracting many new users every year (both downloaders and uploaders) and certifying the world-wide impact of the Freesound website.

In 2020, the UPF contributed to Freesound similarly to previous years: provides the necessary IT infrastructure and basic maintenance, and also researchers from the university dedicate time to Freesound related activities.

In addtiion Freesound received a 36,000$ grant from the Grant for the Web call to experiment with the application of Web Monetization technologies in the Freesound Licensing project, and slightly increased the number of commercial license agreements of the Freesound API and the income they generate.

In general the results of 2020 shows an improvement of Freesound in terms of activity and sustainability, compared with previous years.