Bacteria might help other bacteria to tolerate antibiotics better

Bacteria might help other bacteria to tolerate antibiotics better

A study by the the Dynamical Systems Biology lab reveals that when the two species of bacteria coexist, their response to the antibiotic is opposite to when they are alone. 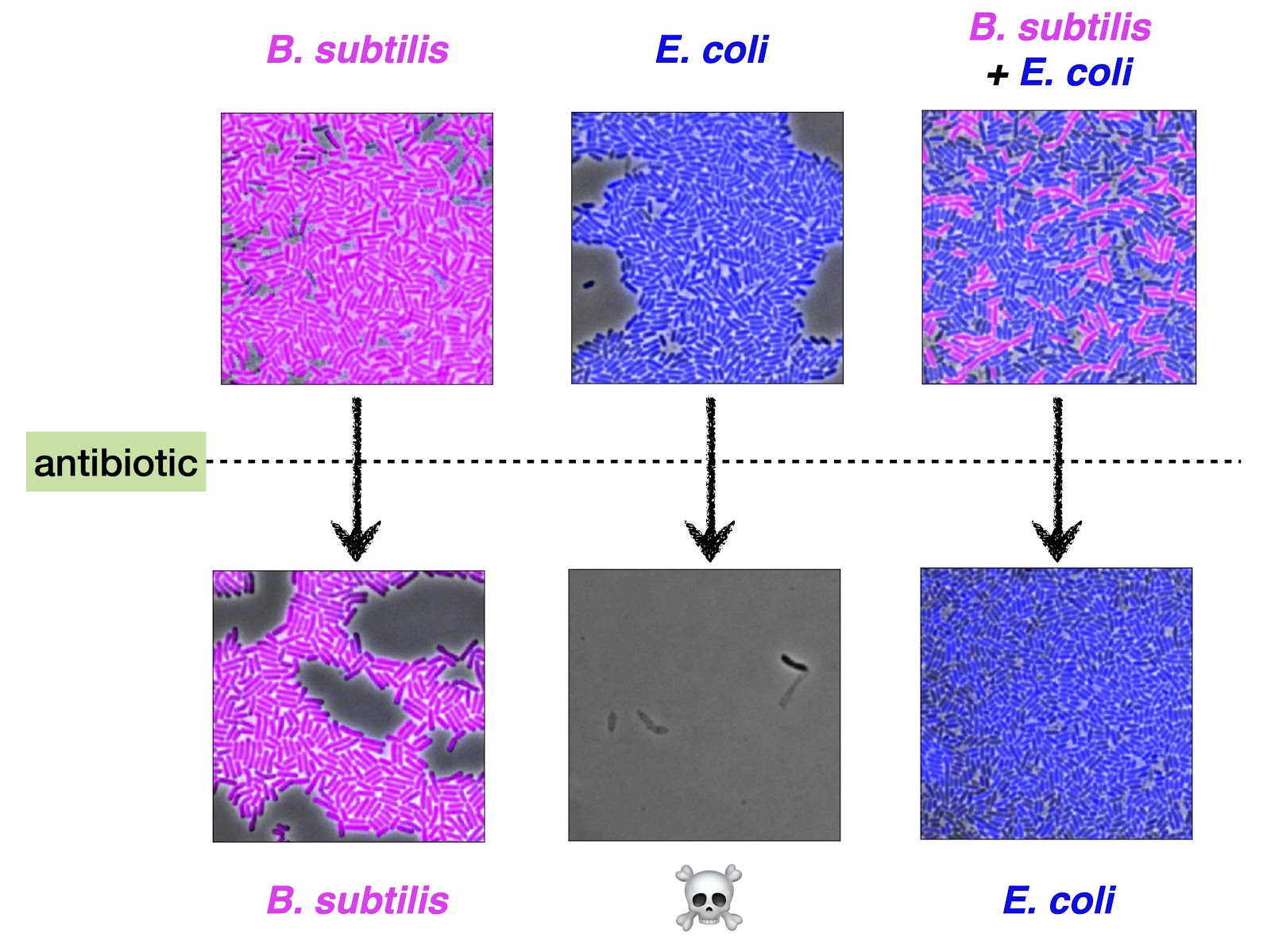 A new paper by the Dynamical Systems Biology lab at UPF shows that the response by bacteria to antibiotics may depend on other species of bacteria they live with, in such a way that some bacteria may make others more tolerant to antibiotics. The study, which was conducted by the researchers Letícia Galera-Laporta and Jordi Garcia-Ojalvo and is published today in the journal Science Advances, may affect the treatment of bacterial infections, even suggesting new strategies to combat these pathogens.

Since the discovery of penicillin almost 90 years ago, antibiotics have saved millions of lives. The required concentration of each antibiotic to eliminate a wide variety of species of bacteria is currently known in detail. These analyses are usually performed in cultures where each species of bacteria lives alone. However, infections are often comprised of more than one species of bacteria, with many species being present at the same time that can interact, sharing all types of chemical signals. In addition, our body contains a large number of beneficial bacteria (microbiota), with which pathogens can also coexist. Therefore, in this study, the researchers examined how communities of multiple species of bacteria respond jointly to antibiotics.

To address this question, Galera-Laporta and Garcia-Ojalvo studied how the bacteria Bacillus subtilis and Escherichia coli respond to the antibiotic ampicillin (penicillin family). Alone, E. coli is sensitive to this antibiotic -beyond a certain concentration it cannot grow- and B. subtilis is tolerant -it manages to grow-. Letícia-Galera Laporta explains that “counterintuitively, we observed that when the two species of bacteria coexist, their response to the antibiotic is opposite to when they are alone. The bacteria that could survive dies and vice versa”. With the help of a mathematical model, they saw that what varies is the collective response, as a result of the change in the availability of the drug for each species of bacteria in the presence of the other.

Two bacteria coexist... and one of them takes advantage

Ampicillin inactivates certain proteins required for bacteria to manufacture their cell wall and thus prevents the latter from growing. Bacillus subtilis tolerates this antibiotic because it inactivates the antibiotic and reduces the free amount circulating in the environment. This benefits E. coli when the two species coexist, because it makes the amount of ampicillin not reach the threshold needed to kill it.

The collective response varies as a result of the change in the availability of the drug for each species of bacteria in the presence of the other.

Most studies of this kind focus on genetic resistance to antibiotics through mutations, which is a very important aspect. “But through studies like these, we wish to show the importance of not losing sight of the fact that bacteria’s survival of antibiotics can be due to other, non-genetic mechanisms”, explains Jordi Garcia-Ojalvo, full professor of Systems Biology at the Department of Experimental and Health Sciences (DCEXS) at UPF. 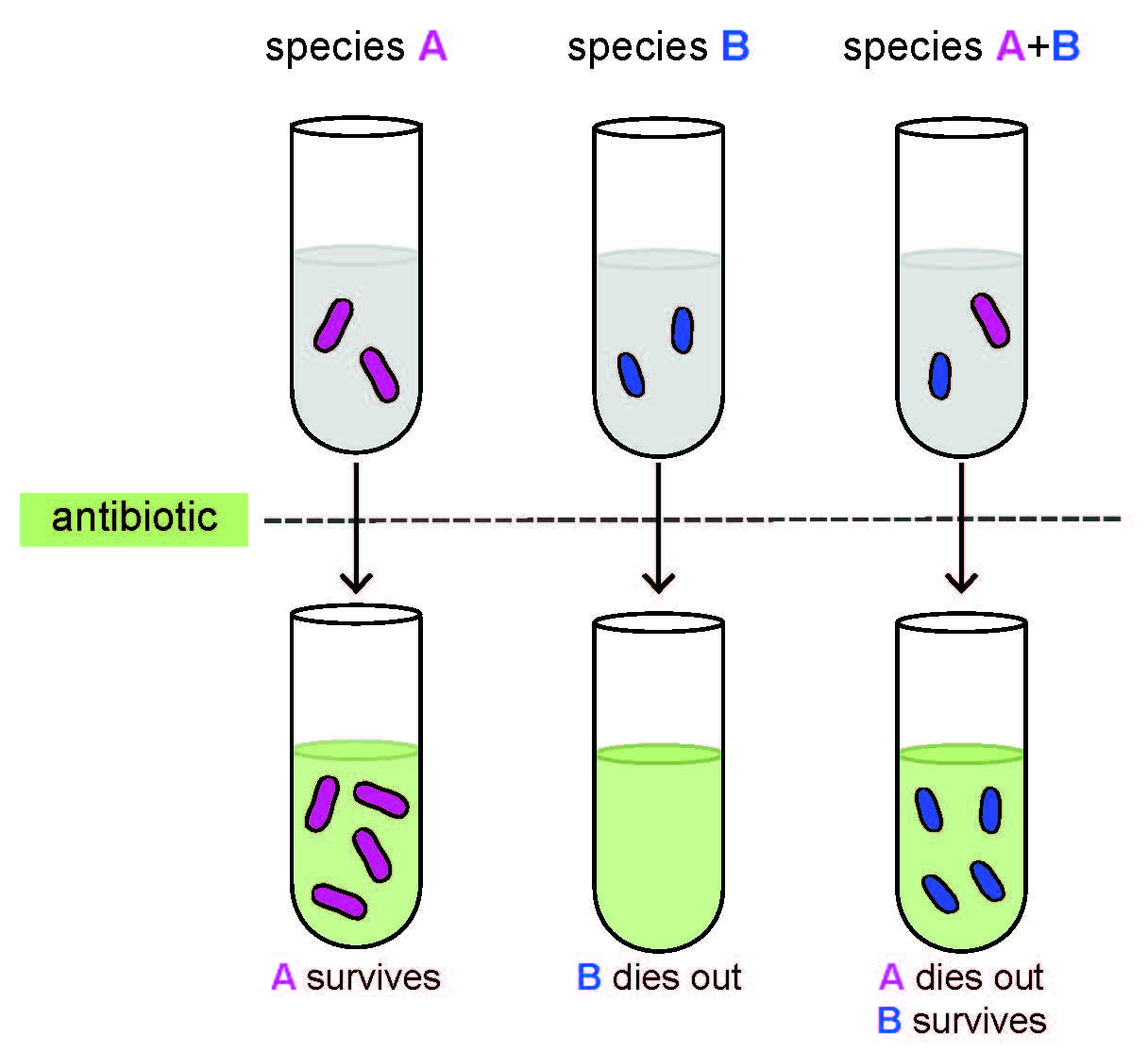 The mechanisms shown in this study are not specific to the two species of bacteria and the antibiotics used. This finding bears out the difficulty of choosing the correct antibiotic dose in treating bacterial infections, because the available information refers to species when they are found alone.  On the other hand, the study also suggests the possibility of using non-pathogenic bacteria to sensitize others that are harmful.  In short, “we must consider the microbial context in which the bacteria are found, in order to improve the information that enables choosing the appropriate dose of antibiotic in each case”, Garcia-Ojalvo concludes.