Pinelopi K. Goldberg has given the 30th Economics Lecture, focusing on the uneven effects of globalization

Pinelopi K. Goldberg has given the 30th Economics Lecture, focusing on the uneven effects of globalization

The chief economist of the World Bank Group and professor at Yale University inaugurated the 2019-2020 academic year of the UPF Faculty of Economics and Business. 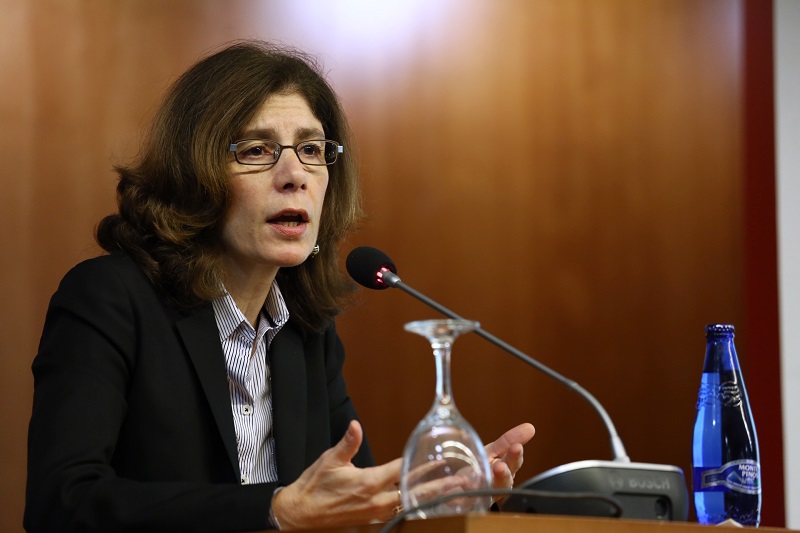 “The unequal effects of globalization” is the title of the 30th Economics Lecture, given by Pinelopi K. Goldberg, chief economist of the World Bank Group, professor at Yale University, and expert in applied macroeconomics, especially the determinants and effects of trade policy on inequality.

The event was held on 6 November at 11 am in the auditorium of the UPF Ciutadella campus, presided on behalf of the rector by the professor of Applied Economics, José García Montalvo, commissioner for UPF scientific strategy.

Also in attendance were Walter García-Fontes, dean of the Faculty of Economics and Business; Jaume Ventura, director of the Centre for Research in International Economics (CREI), who introduced the speaker, and Pilar Miracle, treasury officer at Laboratoris Esteve, a partner of the Economics Lecture. 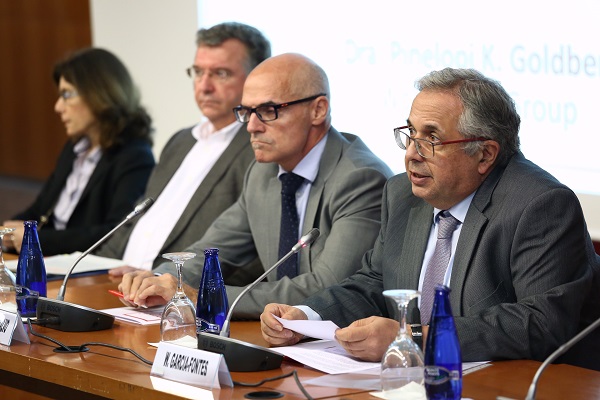 In his opening words, Walter García-Fontes highlighted the fact that this year’s Economics Lecture marks the thirtieth edition, a sign of the maturity the faculty has acquired. “Many economists, governors, employers and academics have been educated in our classrooms, and this is a source of pride for us”, he emphasized.

The dean stressed the highest academic quality of the various degrees taught at the faculty, certified as excellent by the AQU; an international competitive teaching system and a strict process for the incorporation and promotion of teaching and research staff.

The effect of globalization depends on many factors

During her lecture, Pinelopi K. Goldberg said that the effect of globalization on inequality depends on many factors specific to each country and moment in time. Among these factors, the economist highlighted the pattern of trade protection in a country before liberalization; the particular way in which  liberalization took place and the sectors affected; and the flexibilization of domestic markets in adapting to changes in the economic environment, particularly the degree of mobility of labour and capital within countries.

Professor Goldberg divided her lecture into three parts: first, she spoke of the era of globalization and its deterioration, which began after the 2008 global financial crisis. In this section, she spoke of the different aspects that drove business growth, among which she highlighted the fall in transport and communication costs and the technological revolution. 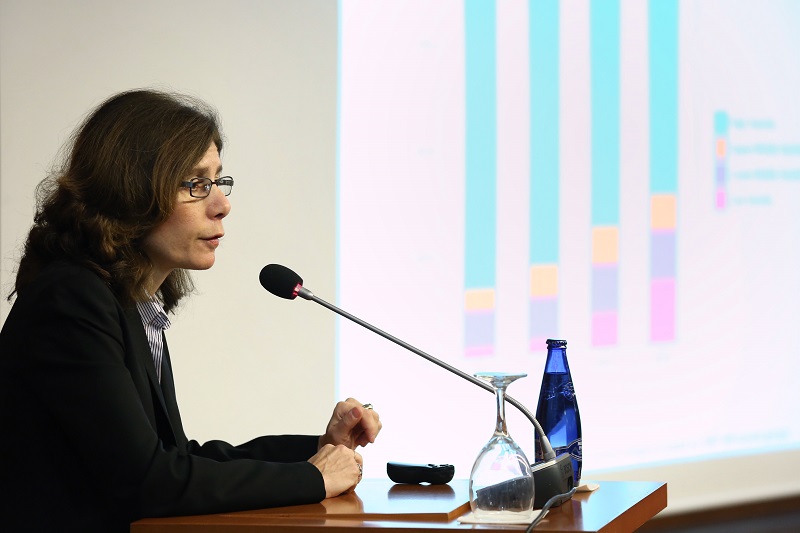 Secondly, she analysed the causes of this deterioration, including the perception that trade competition has not been fair. Thus, in many developed countries there has been a revolt against free trade and immigration.

“Is it a small outbreak amid the wave of globalization, or are we at the beginning of a new era of sustained deglobalization?”, professor Goldberg wondered. In her opinion, the answer depends on the political options chosen by each country and the analysis of the factors that originally caused this negative reaction.

The general statement according to which globalization has increased inequality is not justified”.

After underlining that in recent decades there has been a substantial reduction in global poverty, she said that we must analyse the various factors that have influenced inequalities within each country. For example, the effects of globalization on the labour market (which has led to a decrease in the percentage of people working in the manufacturing industry), the effects on consumers (with benefits that, in the short term, have gone mainly to producers and businesses rather than the consumers themselves) and on brands. “The general statement according to which globalization has increased inequality is not justified”, she assured.

Finally, she talked about the political implications, that tend to focus more on regional policies, and the need to rethink international cooperation in various areas, beyond trade. In this part, she mentioned that there is a need to focus more on disruptions and transitions than on stationary states, and pay attention to the various issues that raise important questions about taxation, such as increasing profits, global value chains and the emergence of global platforms. 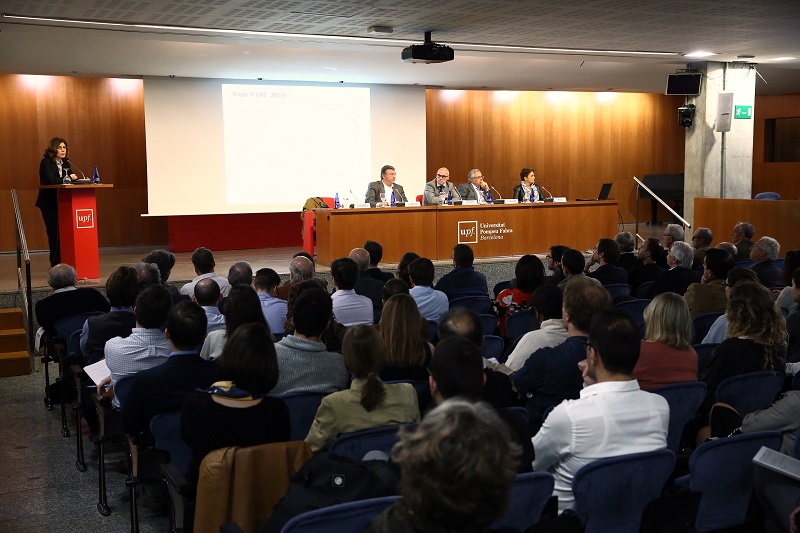 Pinelopi K. Goldberg (Athens, Greece, 1963), chief economist of the World Bank Group, currently on sabbatical from Yale University, where she is the Elihu professor of Economics.

A PhD in economics from Stanford University, professor Goldberg is a leading expert in the field of international economics. She is known for her research on the determinants and effects of trade policy on inequality, intellectual property rights in developing countries, price discrimination, the conversion of exchange rates and trade tariffs.

As chief economist of the World Bank Group, she aims to strengthen the institution’s connection with the most innovative academic research and help form a vision of how to achieve the sustainable growth goals, shared prosperity and a world free of extreme poverty.

Goldberg brings decades of experience as an applied microeconomist and draws from relevant issues of policy on trade and development. She has used a wide range of methodological approaches, including estimating the equilibrium models of structural industry typical of the literature of Industrial Organization.

Goldberg is currently chair-elect of the Econometric Society (until 2021) and has previously held the positions of vice-chair of the American Economic Association (2011-2017) and co-editor and chief editor of the journal American Economic Review (2007-2017).

A member of the National Academy of Sciences and the American Academy of Arts and Sciences, she won fellowships from the Guggenheim Memorial Foundation and Sloan Research, besides winning the Bodossaki prize for social sciences. She is also a researcher at the National Bureau of Economic Research (NBER currently on leave) and board member of the Bureau of Research and Economic Analysis of Development (BREAD). 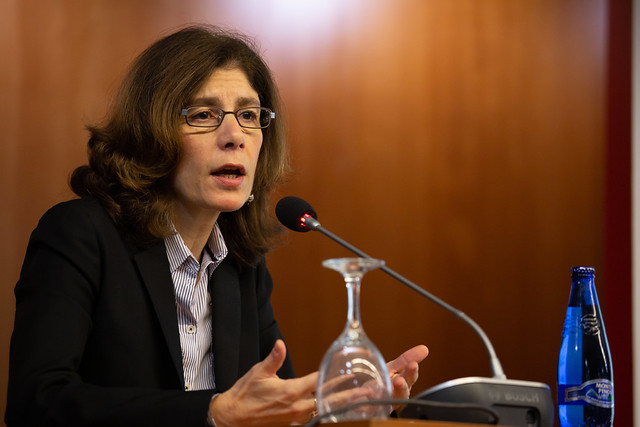