The Professor of Biology at UPF collaborated with the French university in studies on the HIV in macaques.

The Professor of Biology at UPF, Jaume Bertranpetit, was invested doctor honoris causa by the Université Toulouse III – Paul Sabatier in a ceremony held on June the 5th. Bertranpetit was presented by Antoine Blancher, professor at the Physiopathology Centre Toulouse Purpan (CPTP), who recognised his academic achievements and highlighted his “close collaboration with the Molecular immunogenetics laboratory in Toulouse, most especially in studies on the genes involved in the fight against the HIV in macaques”. 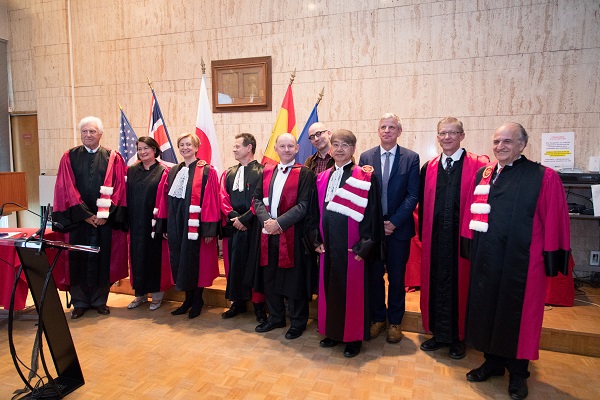 Founder of Evolutionary Biology Unit in the Department of Experimental and Health Sciences (DCEXS), and cofounder of the Institute of Evolutionary Biology (IBE: CSIC – UPF) Bertranpetit’s main research interest is the study and understanding of the diversity of the human genome. He has published almost 300 scientific articles, he is an active member of several national and international scientific organisations, and was the director of the National Genotyping Centre (CeGen) and the Catalan Institution for Research and Advanced Studies (ICREA).