The pygmies of Andaman Islands have fragments of the DNA of this extinct hominid in their genome. Led by Jaume Bertranpetit, scientists at the Institute of Evolutionary Biology have shown that Out of Africa came in single wave.

Scientists at the Institute of Evolutionary Biology (IBE), a joint centre of Pompeu Fabra University (UPF) and the Spanish National Research Council (CSIC), have discovered a new type of now extinct hominid that lived in south-east Asia. This species, not described to date, is an ancestor of humans like the Neanderthals and the Denisovans and they crossed with modern humans tens of thousands of years ago. The results are published today in the journal Nature Genetics and confirm the potential of genomics to build the past. The first authors of the study are Mayukh Mondal and Ferran Casals, of the IBE and UPF respectively, who worked in collaboration with Partha Majumder of the National Institute of Biomedical Genomics in India.

The genetic analysis of a group of individuals from the Andaman Islands in the Indian Ocean has revealed that their DNA contains fragments that do not correspond to modern humans who left Africa about 80,000 years ago. When comparing these sequences with those of Neanderthals and Denisovans, scientists have seen that they also are clearly different. The researchers of the IBE have concluded that this DNA belongs to an extinct hominid that shares a common ancestor with the other two but has a different history. This is new proof that the human genome contains small amounts of information from extinct ancestors.

According to Jaume Bertranpetit, principal investigator of the IBE and UPF professor, “we have found fragments of DNA of the extinct hominid forming part of the genome of modern humans. In the near future we hope to obtain the complete genome from fossil remains”. In fact, different groups of scientists are now analysing bones that might correspond to this hominid, perhaps the so-called Homo erectus. 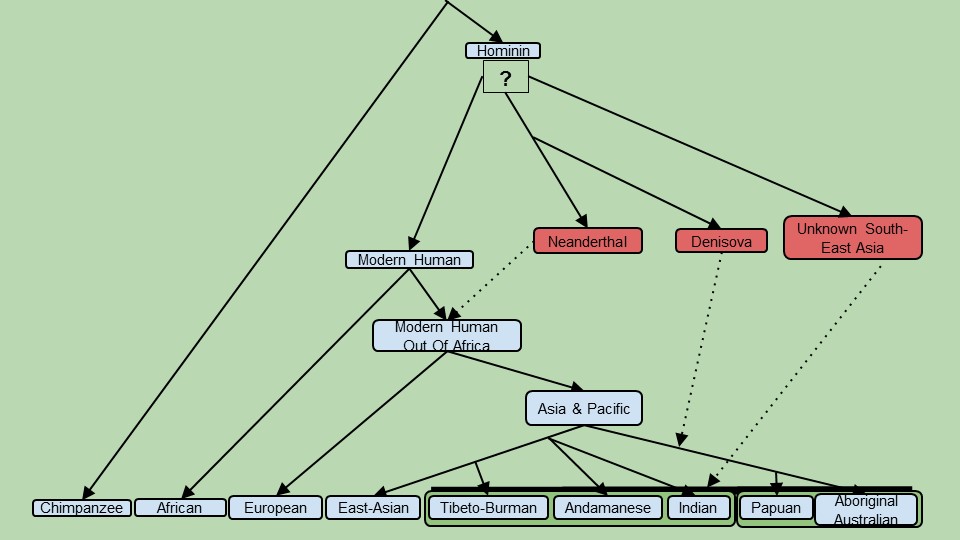 About 80,000 years ago, archaic Homo sapiens evolved into modern man in Africa. A small part of the population left the continent, resulting in all of the human settlements outside Africa. However, there were doubts as to whether Pygmies like the ones on the Andaman Islands come from an initial migration that would have been followed by other migrations. Thanks to the DNA sequences obtained in this study, this has been found not to be the case and so-called Out of Africa, from which all modern humans are descended, came about in a single migration.

The theory of a first wave of immigration dates from the naturalists and anthropologists of the 19th century, who saw that the Andamese and other ethnic groups in isolated parts of south-east Asia were physically similar to African Pygmies. In fact, these people call themselves “Negritos” because they have a short stature, dark, frizzy hair and dark skin. The study, which is published today, however, belies this possibility. “The genome of these peoples contains pieces of DNA of the extinct hominid we have just found but we all come from the same Out of Africa”, concludes Bertranpetit.

The small stature of the Andamese, therefore, is not explained by a founder effect, that is to say, that the first inhabitants were short and that is why their offspring are too. The scientific team has found genetic evidence that this event is the result of an evolutionary process of adaptation and natural selection.

“On a small island there is no place for the whole trophic chain, so the big predators should disappear and the animals of lower levels become small, as it gives them selective advantages”, says Bertranpetit. This study provides conclusive genetic proof of this phenomenon, which gave rise to animals such as Myotragus balearicus, a 40 cm goat that who lived on the Balearic Islands, or metre-high elephants that had lived in Sicily. The current findings could also serve to explain the small stature of the fossil hominids of Flores island in Indonesia.

Photo 2: Evolutionary tree of the paper.