Bilingualism alters the depths of the brain throughout life - Archive

Bilingualism alters the depths of the brain throughout life

Bilingualism alters the depths of the brain throughout life

A study published by researchers at the Center for Brain and Cognition, Miguel Burgaleta and Núria Sebastián, in the journal NeuroImage, using a new anatomical analysis methodology, has enabled highlighting differences between monolinguals and bilinguals.

Until now, research had focused mainly on the effects of bilingualism on the structure of the cerebral cortex, partly because its importance in language is better understood and also due to technical limitations that to date prevented adequately studying other, deeper regions of the brain. However, in the last decade it has been seen that, precisely these deep structures of the brain (which form the so-called “subcortical grey matter”) are more important than previously thought when it comes to learning, producing and perceiving a language. 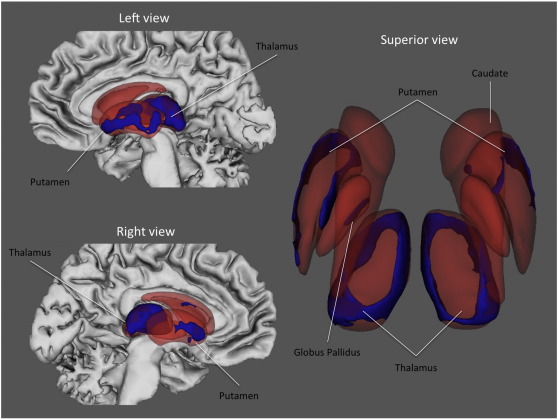 Furthermore, some recent studies suggest that the bilingual and the monolingual brain may have a different  subcortical structure. Miguel Burgaleta and Núria Sebastián co-author a paper which aims to put this possibility to the test and which presents its results in an article published in NeuroImage.

A study carried out by researchers at the Centre for Brain and Cognition (CBC) of the Department of Information and Communication Technologies (DTIC) at Pompeu Fabra University, in conjunction with researchers from Jaume I University (Castelló de la Plana) and Valencia Universities, as well as with the Neuroimaging Centre of the Welcome Trust Centre of University College of London (United Kingdom).

The authors of the study based their approach on the premise that the brain is a plastic organ that adapts its function and structure according to experience. Several previous studies had suggested that the brain of bilingual people had certain peculiarities as a plastic response to the linguistic experience. That is to say, they had suggested that the shape of our brain changes depending on the number of languages in which we can communicate.

Burgaleta, first author of the article explains, “we used MRI to obtain structural images of the brain of bilingual (Catalan and Spanish) and monolingual (Spanish) people and then we investigated their differences”.

For the two groups to be comparable, the researchers select participants with an equivalent socio-economic and educational profile. Thus, the observed differences could be attributed solely to the use of language and not to other variables. “We then applied an innovative method of analysis which allowed us to estimate, with a high degree of anatomical accuracy, where and to what extent bilingual and monolingual people differ in their subcortical morphology”, added Burgaleta.

The results of this study have highlighted that bilingual participants show significant expansion in various subcortical structures (basal ganglia and thalamus). However, more expanded regions have not been found in monolingual people than in bilingual people.

Burgaleta analyses this finding by saying that “the results suggest that these structures might undergo alterations throughout life on the basis of our use of language, developing more as our linguistic repertoire (more sounds, vocabulary, grammar, etc.) becomes more complex, as in the case of the bilingual people studied in this research”.

This work represents a significant breakthrough in the knowledge to date on brain plasticity and the neuroanatomical bases of language, and helps the scientific community to understand better the effects of bilingualism on the human brain.