European Universities, like EUTOPIA, promote European values and identity and help to improve the quality of higher education in Europe

European Universities, like EUTOPIA, promote European values and identity and help to improve the quality of higher education in Europe

On 16 and 17 May, UPF hosted the THE Europe Universities Summit, organized jointly with Times Higher Education and EUTOPIA. The meeting, which gathered 200 delegates from around the world, served to reflect on the role of the alliances of European universities promoted by the European Commission. 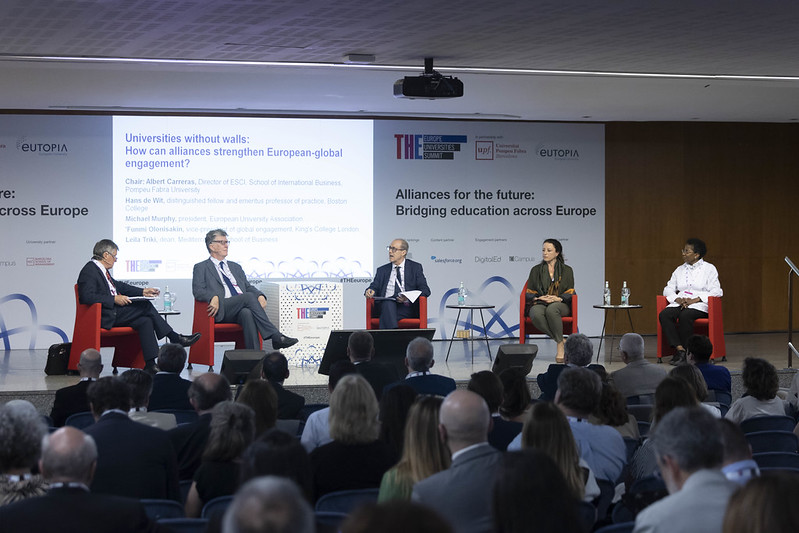 One of the current challenges in higher education, as vice-rector for Internationalization at UPF Toni Luna points out, is “the promotion of values of cooperation between university institutions in the face of the competitiveness set by the international agenda in recent years”. The European Universities initiative promoted by the European Commission is heading in this direction and was the main theme of the conference organized by UPF, jointly with Times Higher Education and EUTOPIA, held on 16 and 17 May on the Ciutadella campus, as part of the UNESCO World Conference on Higher Education held this week in Barcelona.

Nearly 200 delegates from 34 countries around the world met to reflect on the role of the new alliances of European universities and how this form of cooperation and collaboration might help improve higher education. The thirty or so speakers who took part in the summit offered their qualified views on the future of higher education in Europe and the rest of the world. Participants included Michael Murphy, president of the European University Association; Funmi Olonisakin, vice-president of International Affairs at King's College London; Francesc Pedró, director of UNESCO's International Institute for Higher Education in Latin America and the Caribbean; and Rocky Tuan, president of the Chinese University of Hong Kong. It also featured keynote speakers from EUTOPIA member universities. 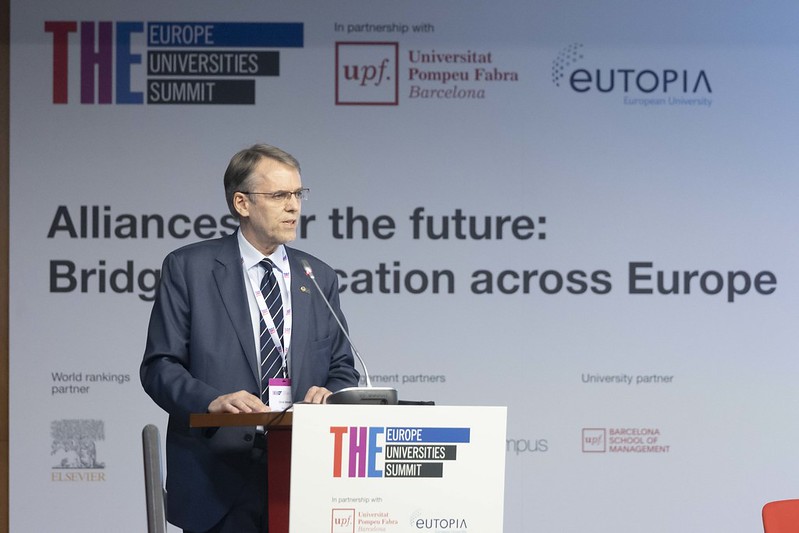 Oriol Amat, UPF rector, said at the opening of the summit that “internationalization is one of the backbones of UPF’s strategic policy and an important tool to improve quality, innovation and diversity in higher education”. He added that “the University has achieved a solid international reputation but we wish to continue to develop first-class strategic collaborations in order to attract talented international students and professors. And the learning of good practices in the framework of EUTOPIA, our European University project, can help us”.

“The University has achieved a solid international reputation but we wish to continue to develop first-class strategic collaborations in order to attract talented international students and professors. And the learning of good practices in the framework of EUTOPIA, our European University project, can help us”. 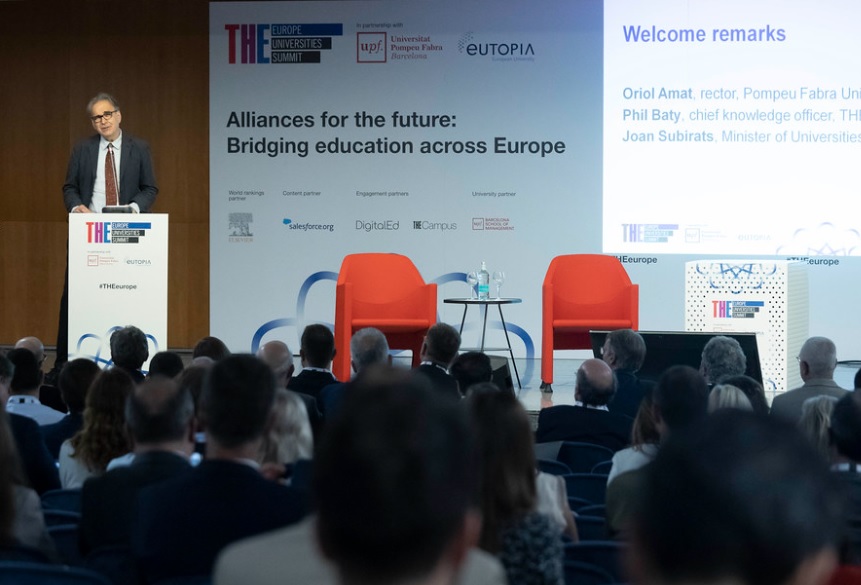 Joan Subirats, in his speech during the opening session, stressed that “European higher education institutions must address their global challenges through collaboration and mutual learning”, adding that “universities are uniquely positioned to combine education, research and innovation, and thus meet often global social and economic needs that have local specificities”.

Gemma Geis, in closing the summit, said that “this is an important event in the framework of the UNESCO world conference on higher education being held this week in Barcelona, where key concepts and future challenges of the sector will be discussed”.

Meanwhile, Jose Manuel Pingarrón, stressed that “European university alliances are the future and the European Commission promotes them as a good example of the European lifestyle. But it is important for us to export these positive models to other parts of the world, to universities in Latin America, for example, to share our good practices”.

Among other issues, the two days covered the role that should be played by the alliances as an instrument for strengthening Europe’s commitment to the rest of the world, not only as a destination for students, but as a global partner for matters concerning cooperation in education, research and innovation, or what the benefits might be of the alliances of European universities for building a resilient and innovative higher education system.

The meeting also sought to deepen into the role of universities in the face of the crisis in Ukraine, to seek long-term solutions to the collapse of higher education in the country.

Phil Baty, head of knowledge at Times Higher Education, rated the summit as one of the most beneficial in recent years, of very high quality in terms of content and organization. He also stated that “we may need to start reviewing how international rankings evaluate universities and not take so much account of quantitative elements such as size or seniority, and start taking more account of what really matters, the influence on their environment, social responsibility, public benefit, or inclusion and accessibility”. 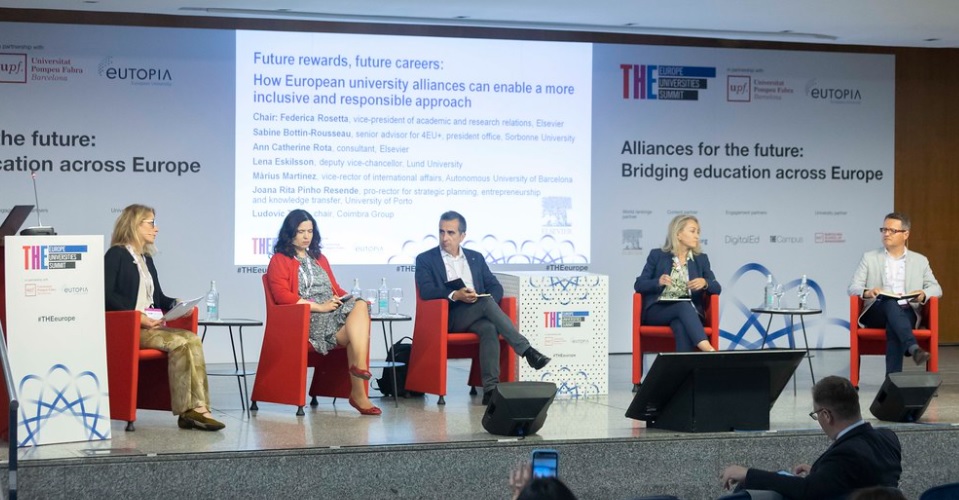 The summit of the European Council held in Göteborg in December 2017 witnessed how the higher education landscape in Europe was rapidly changing. One of the initiatives pointed out at the time was the creation of a score of European universities by 2024 that would allow students to get a degree combining training in different countries of the European Union. The ultimate goal sought was to join forces and improve the international competitiveness of Europe’s universities.

To this end, the European Commission launched the European Universities Initiative, which defines them as “transnational alliances that must become the universities of the future, promoting European identity and values, and revolutionizing the quality and competitiveness of European higher education”. There are currently 41 consortia, one of them, EUTOPIA, and each consortium is made up of a varying number of universities: between five and eleven each.

Photo album of the THE Europe Universities Summit 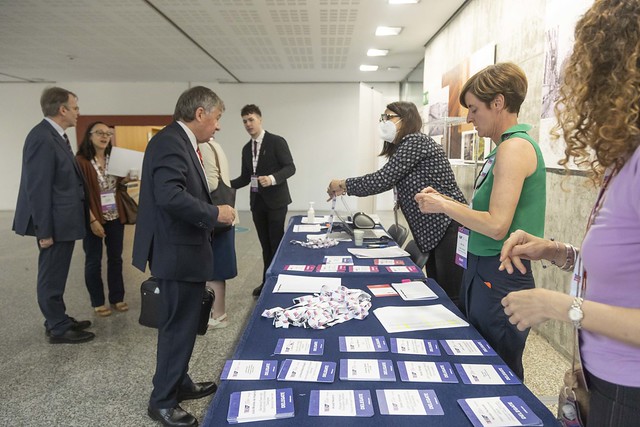