Maria Lindmäe, a postdoctoral researcher with the CaSEs Research Group at UPF, is the author of a scientific article that analyses the soundscape of the markets of Vic and Trinitat Vella. In her work, she reflects on the fact that excessive control of vendors’ pitches may involve discrimination. 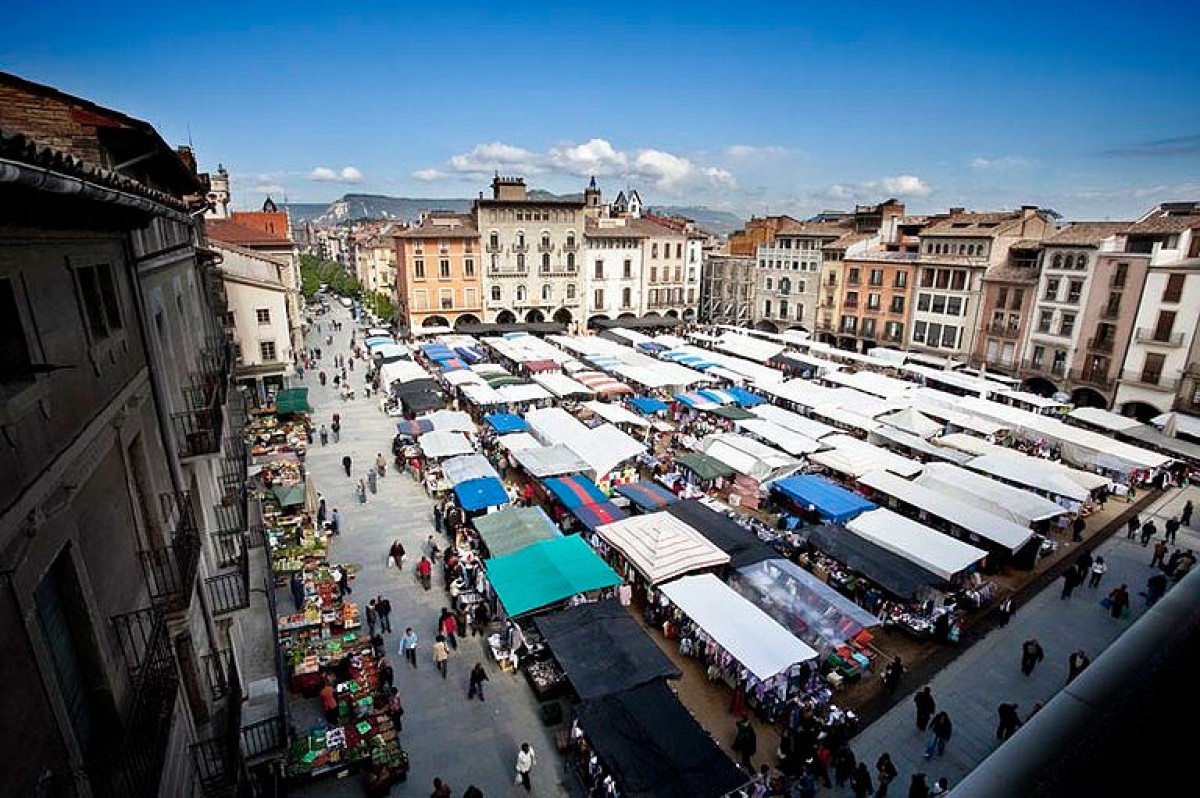 As part of the European project Moving Marketplaces, the postdoctoral researcher Maria Lindmäe, a member of the Culture and Socio-Ecological Dynamics Research Group (CaSEs) of the UPF Department of Humanities, is the author of an article that investigates the soundscape of different weekly markets in Catalonia. In the study, the author examines the acoustic tactics and different types of creativity used by sellers to market their products.

The article under the title “¡Tengo gloria bendita!: pitching and the sonic production of place atmospheres under increasing marketplace regulation” recently published in the journal Cultural Geographies, shows that, rather than being an illegal noise -as classified by current regulations governing markets- pitching is a cultural tradition that entails affect, humour and creativity, and allows social groups that rarely have a voice in the public sphere to be heard.

“The ‘noisy’ market represents an aspect of intangible cultural heritage that attracts clientele precisely because of its diversity and spontaneity, unlike culturally homogenized shopping centres”

“As a cultural and professional practice, vendors’ pitches produce soundscapes that diversify public space in socio-cultural terms, and can express a subtle desire of recognition of the difference”, states Maria Lindmäe. And she adds: “The ‘noisy’ market represents an aspect of intangible cultural heritage that attracts clientele precisely because of its diversity and spontaneity, unlike culturally homogenized shopping centres”.

Study focusing on the markets of Vic and Trinitat Vella, with three types of vendor

The author focuses on two markets with rather different features in terms of regulation. On the one hand, the traditional market of Vic, whose city council allocates specific resources for its administration; and on the other, Trinitat Vella market, in the north-east of Barcelona, more recently created and lacking such an established administrative structure.

The author presents three types of market vendor: repeaters, influencers and the silenced

The author presents three types of market vendor: repeaters, influencers and the silenced, which allow her to illustrate the different levels of creativity at play in contesting marketplace regulations that prohibit this “noisy” form of advertising. “By describing three types of vendor, I have attempted to show that their sonorous interventions add layers to market atmospheres, making them livelier, more creative, and sometimes entertaining”, Maria Lindmäe assures.

The author adds that “pitching allows vendors to occupy a certain territory through the sound scope of their voice and sometimes immerses customers and other merchants in affective atmospheres that stimulate people to interact and associate positive memories with the market”.

The study was based on semi-structured interviews with traders and market managers, following up the traders, field recordings and observations. The data used were collected between June 2020 and July 2021, when Catalan street markets were subject to health control measures that often changed and required greater distances between stalls and the wearing of masks.

The paper reminds the municipal authorities that manage weekly markets that over controlling sounds is a way of being able to decide which social groups can and cannot be heard (and seen) in public spaces, and therefore potentially discriminates. “In addition to intervening in markets, the regulation may create limits and discrimination at different levels. Cataloguing numerous forms of conduct and practices as illegitimate imposes dominant rules of civility and order in the public space, which at the same time excludes practices that do not fall under such definitions”, the author argues.

“By outlawing their pitching, vendors are marginalized from society and the legitimacy of their profession remains uncertain”

In this sense, according to Maria Lindmäe, given that most market vendors, whose sound advertising describes their work, are Spanish merchants of gypsy and South Asian ethnicity, the regulations governing noise at markets above all harms these already systematically marginalized ethnic groups. “By outlawing their pitching, vendors are marginalized from society and the legitimacy of their profession remains uncertain”, she says. Thus, according to the author, prohibition adds to other already existing forms of discrimination towards immigrants and Spanish gypsies, who experience systematic exclusion from more conventional professions due to migration regimes, ethnicity or social class.

Moving Marketplaces, which has run for three years, has studied the dynamics of inclusion and exclusion of weekly markets in four European countries (Spain, Switzerland, the Netherlands and the United Kingdom), and has involved the following four universities: Pompeu Fabra University, Université de Neuchâtel, Radbound University and Open University (coordinator).

The project is developed under the Humanities in the European Research Area of Horizon 2020 and, on the Spanish side, with funds from the Ministry of Science and Innovation. It will come to a close with a webinar on Friday, 20 May, from 12.15 to 2.00 pm, with the intervention of the nine researchers of the research team, gathered in Neuchâtel (Switzerland) to present their main conclusions.

Participants will include Maria Lindmäe and Marco Madella, ICREA research professor at the UPF Department of Humanities, coordinator of the Culture and Socio-Ecological Dynamics Group (Department of Humanities) and principal investigator of the project at the University. Anyone interested will be able to follow the event via a link accessible from the webinar website.