My scientific and professional career path rand its particular multidisciplinary approach can be better comprehended by understanding my long-term passion for scientific research, music and artistic creativity, and the desire to intertwine those elements in innovative ways.

I hold a Bachelor degree in Fundamental Physics (1986). I combined my undergraduate studies in the early 80s with music studies at the Conservatory and free jazz saxophone playing. After discovering computer programming during my third year of Physics at the university, I commited to dedicate myself to computer music improvisation (a completely novel area of practice and research in the mid 1980s in Spain). After graduation I thus worked as a software developer in the industry while self-studying computer music with an Amiga computer in the evenings. In this period I also started to collaborate with media artists and to perform live computer music with the "no-wave" and experimental jazz music group, Clónicos. Throughout the 1990s I conceived and developed award winning interactive installations, multimedia performances [7] and a collaborative music creation project over the Internet [5,6], in collaboration with internationally renowned Catalan artists such as Marcel·lí Antunez or La Fura dels Baus. I also continued performing and improvising live computer music, both alone and with the group FMOL Trio, as well as composing commisions for movies, media shows or specific musical ensembles.

I resumed my scientific and academic career in 1999, when the University Pompeu Fabra initiated the Computer Engineering Faculty (DTIC), together with a research group in computer music, the Music Technology Group (MTG), headed by Dr. Xavier Serra. This allowed me to start a researcher and teacher career, with the full support of the university. Hence, although my academic career officially started in 1999, my subsequent research could not be comprehended without the knowledge, vision and experience gained in the professional and artistic world throughout the 1990s.

In 2005 I was awarded with a PhD [8]. Within the MTG, I have coordinated two European projects and do currently lead a Music and Advanced Interaction team with 4 PhD students that focuses in Human Computer Interaction (HCI), with a special emphasis on real time music performance, tangible interaction and BCI interfaces. A first result of this convergence between computer music performance and HCI, was the project on tangible interfaces Reactable [9,10], which in 2007 gained international repercussion when Icelandic singer Björk incorporated a Reactable in her world tour Volta. With hundreds of articles in international magazines and general press, hundreds of lectures and presentations around the world, national and international presentations on television, the project has accomplished unparalleled mass popularity for a project of academic origin, having received many prestigious international awards. The technology transfer generated by the Reactable was also quite relevant (between 2006 and 2008, UPF sold 12 Reactable units to institutions on three continents). Within this growing trend, in March 2009, the creators team decided to create Reactable Systems, the third spin-off of UPF, with the participation of the university and Xavier Serra, head of the MTG research group. While two of the Reactable’s original researchers are working full-time at the company, I decided to stay within the academy, finally obtaining a tenure-track Professor position at UPF in 2011 and pursuing a longer-term research within the framework of the MTG.

After the Reactable project, I have become one of the world leading experts in Tangible Interaction (TI), with papers with 310+ citations [9], chairing twice the international conference on “Tangible Embedded and Embodied Interaction” (TEI) and becoming a member of TEI's steering committee. My team and I have also entered non-musical domains, investigating some of the special areas in which tangible interaction may be more profitable [11], creating tangible programming languages for children [3], studying the potential benefits of tabletops within special users such as autistic children [17], refining techniques for the tracking of objects in 3D space, exploring augmented communication and computer-supported collaborative work using tabletops and human physiology, studying implicit interaction and multimodal display of users' affective and cognitive states [14,15,16], developing open-source tabletop programming SDKs for helping others building their own tabletop applications [13], analyzing the potential for creativity in tabletop interaction [2] or creating frameworks and methods for the evaluation of complex interaction techniques such as the ones taking place on a collaborative tabletop [1,18,21]).

I am also especially interested in education, and I feel it is now time for me, for a new, ambitious and domain oriented direction, and at the same time for a fully multidisciplinary and holistic approach. I am thus starting to work on what, in my opinion, constitutes nowadays the most relevant challenge in Human Computer Interaction (HCI), the study of interaction design for children’s education. Young children, which are still mostly free of the burdens of 25 years on WIMP and GUI interaction, will be shaping our world very soon, and it is our big responsibility to provide them with a richer and more creative education - away from the burdens of the 19th century education we are still relying on - that will allow them to be freer, more conscious, open-minded, creative, and more prepared for the inescapable radical cultural, socio-economical and ecological shifts we are already starting to experiment.

The following references are not necessarily my most relevant publications. They have been selected in order to give an overview of my different lines of research, with a special focus on the more recent years and the newer work being carried together with the PhD candidates I'm currently supervising. 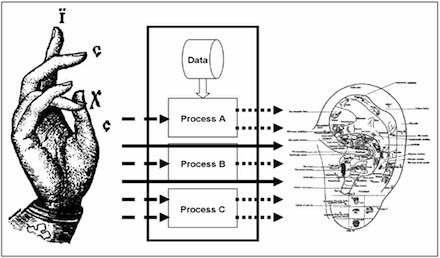