Music 3.0 was an R&D project funded by the program Avanza Contenidos of the Spanish Ministry of Industry, Turism and Trade thar runned from 2008 to 2011. Its main goal was to develop an experimental web-based system for music creation, interaction and socialization. Such system aimed at integrating the most recent technologies of the Web 2.0, advanced on-line tools for music creation, and large sound and music repositories. For such system there was a need to develop social networking models specific for music, models for the treatment of music content and also models for the creation of new content.

The result was a Web portal which allowed any user, or software application, to participate in a musical social network, easily accessing a wide range of musical content and being able to create and share new content using new concepts and adapted to the user's profile.

The diagram shows the integration vision of the Music 3.0 concept. 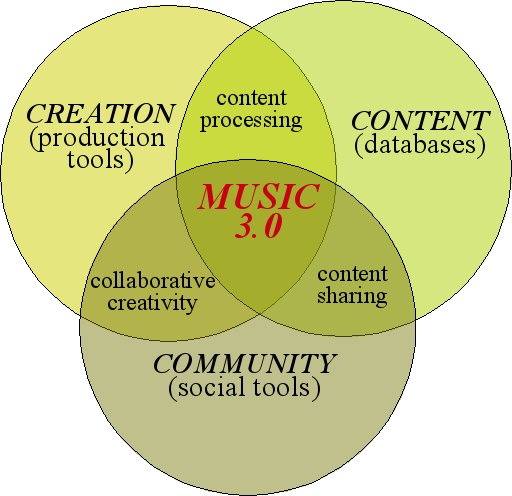 The main outcome of this project was the Canoris platform. Canoris offered functionality in both the analysis and synthesis of sound and music. Research into Music Information Retrieval and Digital Signal Processing by our partners were integrated into a single coherent platform. After the project finished and in order to maximize the use of the audio processing technologies developed, Canoris web services were integrated in a renewed website of the Freesound Project.