POSTCELL aims at laying the foundation for future generations of wireless networks as they move past the reigning cell-centric paradigm and into the post-cellular era. This entails both the definition of a new architecture for such networks and the characterization of the ensuing performance.

The art of wireless communications is arguably one of the biggest technological revolutions in history. Its impact on the functioning of contemporary society cannot be overstated. With much of the earth’s population already using mobile communication devices, one could think that the surge in wireless traffic is bound to subside. Nothing could be further from the truth. A perfect storm brought about by the confluence of smartphones, cloud computing and machines, is poised to increase the volume of wireless traffic to staggering levels that, quite simply, would bring current networks to their knees.

In the three decades since their inception, cellular systems have undergone four generational transitions, stretching from the 1st Generation (1G) of analog telephony in the 1980s to the advanced and fully digital 4th Generation (4G) currently being deployed. Despite their substantial differences and incompatible signaling formats, subsequent generations have all conformed to the same architecture that underpinned 1G, namely the cellular architecture. The momentous notion behind this architecture dates back to a 1947 technical memorandum by Douglas H. Ring, a Bell Labs scientist who foresaw how ubiquitous radio access could be provided. A cellular radio access network tessellates a territory into cells, each centered on a site where a so-called base station houses all the necessary equipment to radio-communicate with users.

The cellular architecture has served us well and it has remained unchallenged, to the point that base station sites have witnessed generational transitions as hardware upgrades. However, the time is approaching when this architecture will have become exhausted.

Without disregarding other prominent metrics such as latency, the ability of a cellular network to serve its customers is chiefly characterized by its system capacity, broadly defined as the number of bits that can be reliably conveyed per units of time and area. Dissecting this quantity, three ingredients can be identified:

These three ingredients come together to yield the system capacity as

It is worth dwelling briefly on what these items represent, and on how they have evolved.

The capacity of cellular networks has grown by two orders of magnitude since their inception, but now, just as this capacity has to surge to new levels, some of the pillars of this growth are faltering.

First, growth is stalling in terms of cell spectral efficiency, whose improvement is all but exhausted as the limits imposed by information theory are approached. Modulation, coding, multiaccess and power control are highly optimized already and can hardly yield more than incremental gains henceforth. Multiantenna technology appears to offer the only hope of major additional improvements.

Second, growth is curbed in terms of bandwidth. There is a finite amount of prime quality bandwidth for wireless: too low frequencies require excessively large antennas and too high frequencies suffer from poor propagation, leaving a desirable range of a few GHz. Despite an ongoing process aimed at vacating bands in this busy range, the amount that wireless systems will be able to further add is limited. (Paradigms outside this range are being investigated by other communities, e.g., millimeter-wave, or visible-light transmission; while mostly aimed at proximity transmissions, developments in this direction will be welcome news.)

In light of the foregoing considerations, there is broad consensus on two ways to tackle the challenges ahead:

While seemingly exclusive, we posit that these two ideas are complementary in that neither by itself can resolve the conundrum. Many antennas per base cannot guarantee indoor coverage and extreme densification alone cannot ensure contiguous coverage. A driver of POSTCELL is that, with a proper architecture, these can become two sides of a coin we term massification:

Reconciling these ideas and enabling a truly phenomenal degree of massification calls for an entirely new architecture where cells are surpassed.

The first step to construct something new is to deconstruct the old. At the heart of every cell there has always been a base station with comprehensive functionalities, including digital signal processing and radios. Now, some of these functionalities should be pushed towards the antennas and others away from them. As antennas and radios multiply, they should attach forming antenna-radio units that become the basic building blocks of the infrastructure. Meanwhile, the signal processing should move to a higher plane such that these units can work together and the network can be smarter. This deconstruction is instrumental to reconcile localized and distributed massification, whose difference now becomes only a matter of whether the antenna-radio units are stacked on certain locations or else scattered. The deconstruction of the base station, hitherto the cornerstone of cellular networks, is the starting point for the formulation of POSTCELL.

The upwards shift of signal processing naturally leads to the concept of cloud radio access. In the limit, and borrowing from the cloud computing paradigm, this would entail centralizing the signal processing for the entire radio access network on the cloud, where the intelligence would concentrate, leaving at the air interface edge only the massive number of antenna-radio units. But rather than an excessive centralization, which we shall argue against, what is alluring in this shift is how it opens the door to virtualization. Base stations could cease to exist physically, rather becoming software processes. Such virtual base stations could be created at will, defining which antenna-radio units communicate with which users and rendering the structure of the radio access network programmable. Different structures could be had on different channels and, being software-defined, these structures could be reconfigured dynamically as users move/enter/leave. This would offer huge elasticity and reduced energy consumption, as no resources would ever be idle.

POSTCELL is organized in three tracks. The overall programme, including the tracks and their constituent tasks, the sequencing thereof, and the tools, is reflected in the figure below. 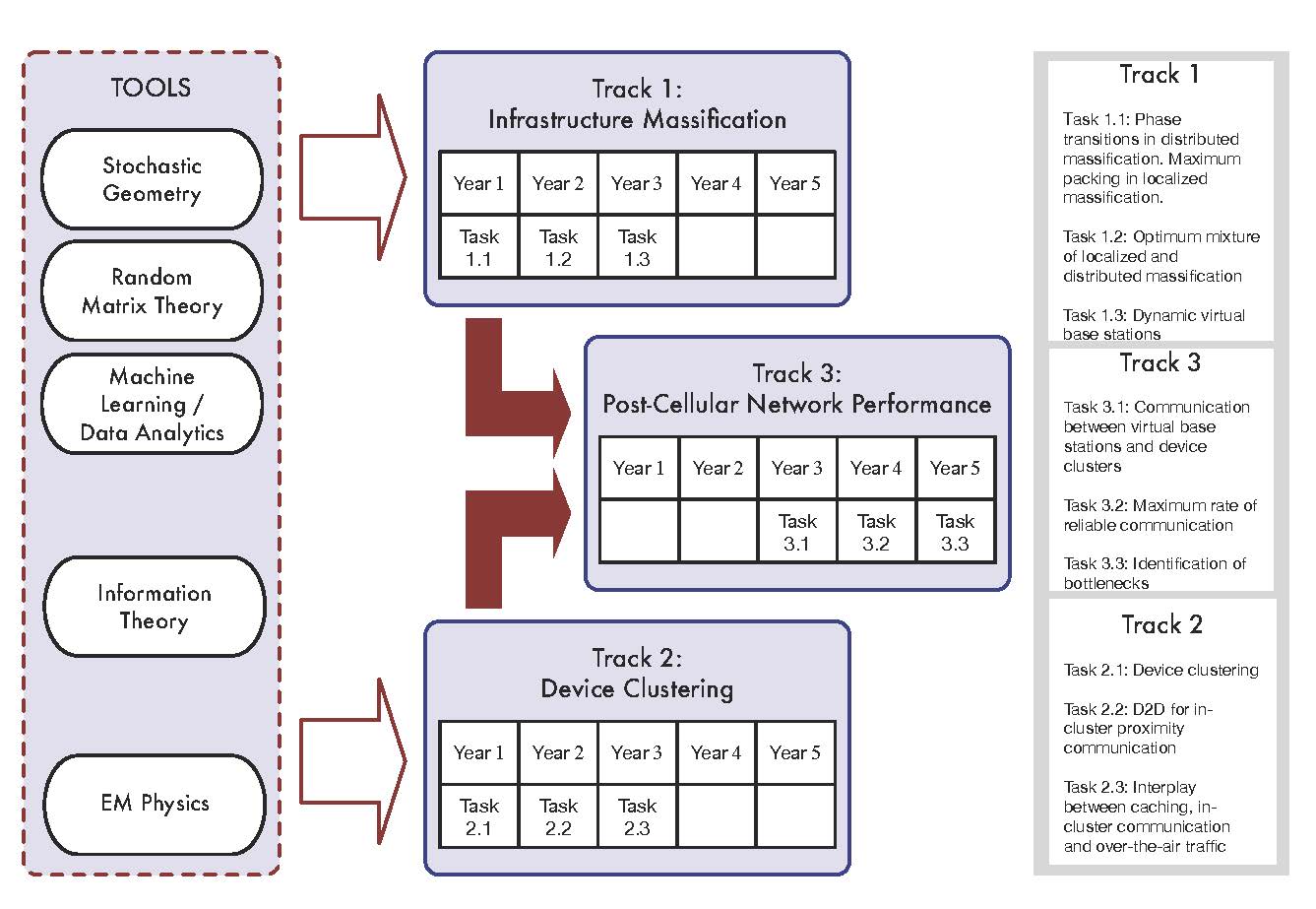