“If women in Afghanistan shout once, here we must shout ten times” - Interviews

“If women in Afghanistan shout once, here we must shout ten times”

“If women in Afghanistan shout once, here we must shout ten times”

Lema Rashid, a first-year student of the bachelor’s degree in Law and activist for women’s rights in Afghanistan. 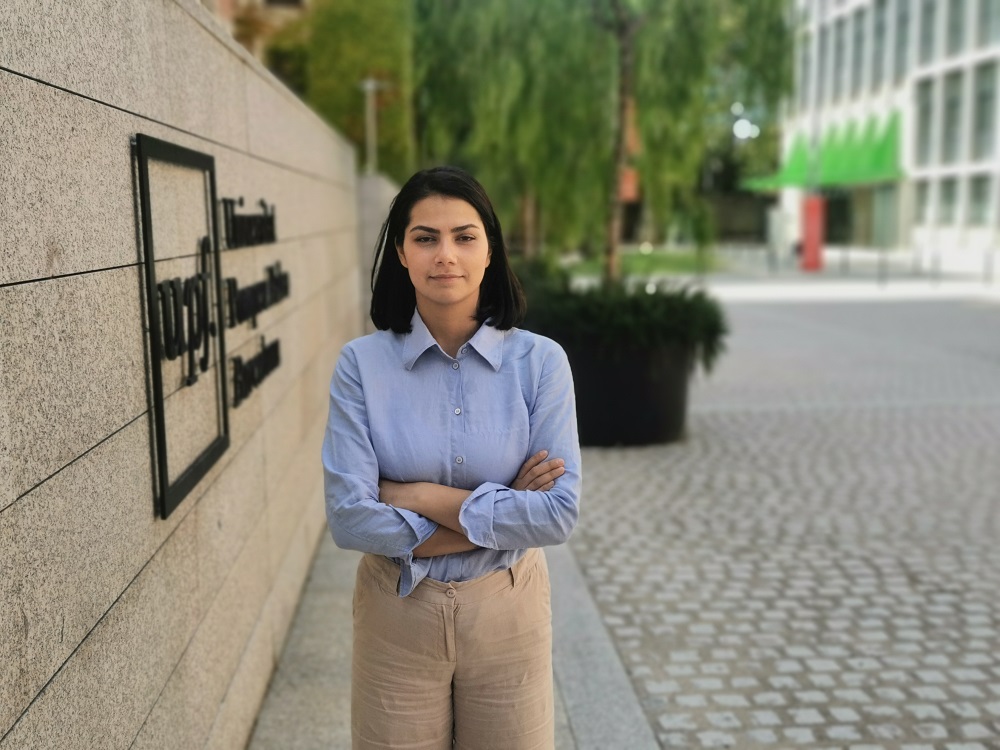 Lema Rashid has this year begun her first year of the bachelor’s degree in Law at the UPF Faculty of Law, via the over-25s entry channel. She will be combining her studies with a part-time job. She was born in an Afghan refugee camp in Pakistan in 1994, where her parents met after fleeing Afghanistan during the war against the Soviet Union.

She has lived in Catalonia since she was 15, as a political refugee, with her mother and sisters. Her main life goal is to help women in her country, who live in a situation of vulnerability, oppression and a lack of human rights, caused by the Taliban, and aggravated by the withdrawal from Afghanistan by the United States.

Linked to the Afghan community in Barcelona, which her mother set up, for a decade she has been supporting Afghan women arriving in Catalonia, and calls for mobilization to change the unjust situation in her country, a place she visited as a child sporadically and to which she aspires to return one day.

—You have been living in Catalonia for more than ten years. Do you think you have adapted to Catalan society?

It is very difficult to answer this question with a yes or a no. The day we left our loved ones behind and said goodbye, with moist eyes, was the worst day of my life. This left a hole in my heart that can only be filled by returning to my country. Therefore, adaptation has not been easy, because the life of a political refugee is no life, it is a daily struggle. But it helps greatly to receive the support of the Catalan community. Catalan values are very similar to mine, love for your country and courage. We are both fighting for freedom.

Catalan values are very similar to mine, love for your country and courage. We are both fighting for freedom.

But, no matter how at ease I feel here in Catalonia, I still dream of returning to Afghanistan one day. What sense can my life have here if the people of my country cannot even enjoy basic, fundamental human rights? I want to return to fight alongside the women of Afghanistan. Of course, with the intention of generating greater awareness in the rest of the world, taking advantage of my ability to travel. And our weapon will be education.

—What are your feelings about studying at university? When did you decide that was what you wanted to do?

It is a dream come true. For various reasons and circumstances in life, I was unable to continue my education at the right time (not because education has an age limit). So going back to books wasn’t easy, but I understood that education is the only thing that can never be taken away from you!

I must also say that the decision was not just mine. I was able to achieve this thanks to two very important people, who not only opened their home to me, making me welcome for two years, but also their hearts. They were two years of huge support, love and stability, in which I could get my thoughts organized so to be able to study. For me, they have been parents, friends and teachers. They have helped me a lot, and thanks to them I have come to believe that it is never too late to start off on a new path.

I have understood that education is the only thing that can never be taken away from you!

—Why did you decide to take the bachelor’s degree in Law, and at UPF?

Probably because I’m from a country that has been in conflict for over forty years. When you grow up witnessing inequalities and crimes, you feel a desperate need for justice. There is no peace without justice and peace is my ultimate goal. Concerning studying Law, I am especially fond of the subject of human rights. I chose UPF for its international outlook, because everyone has spoken to me very highly of it, and because of the good positions it holds in the rankings.

—Will you combine your studies at UPF with a job?

Later on I would like to work as a Pashto or Dari interpreter, which are the two official languages in Afghanistan. But if there’s no luck, any other weekend or part-time job.

—Can the Law degree provide you with knowledge to help the women of Afghanistan?

Yes, we need more Afghan women in executive power. Injustices against women in Afghanistan are numerous, violated by the woman’s husband or father. For example, gender-based violence, child marriage, rape and honour killings. These are some of the areas where I could help. 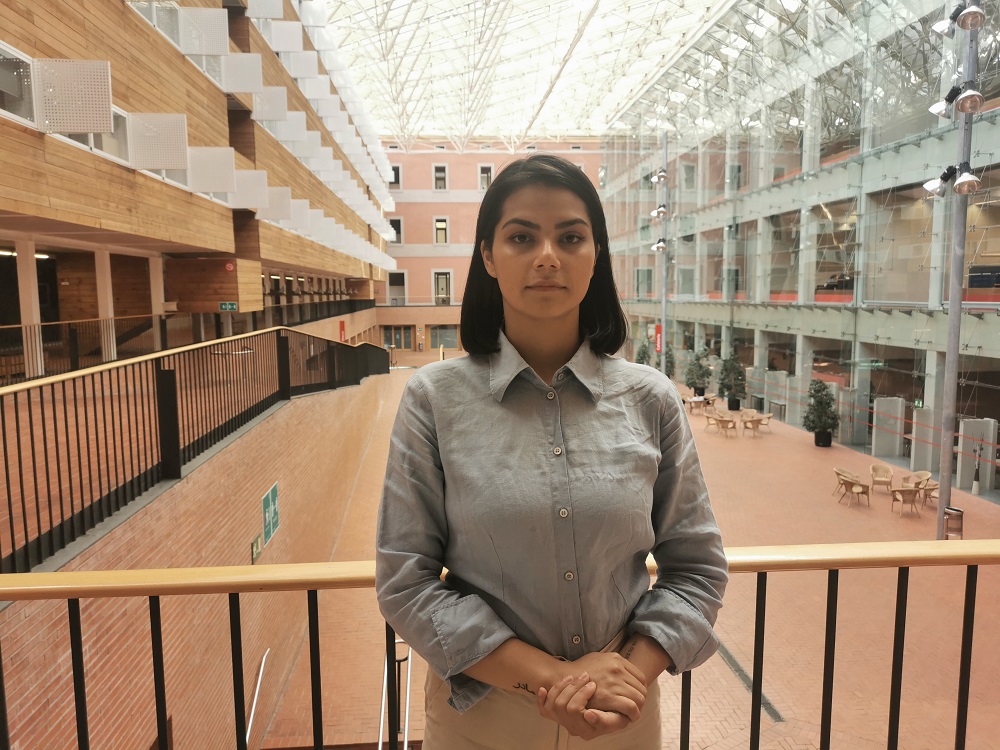 —In recent years, with Ashraf Ghani as president and the US in the country, had the situation of women in Afghanistan improved? Had illiteracy been reduced?

Ashraf Ghani’s puppet government was so rotten and corrupt that people were increasingly considering following the Taliban. They were desperate for a transparent government. Illiteracy has decreased very little… The most rural parts of the country have never enjoyed access to education.

In the past twenty years, women did make significant progress: they no longer lived under the Taliban, were no longer forced to wear the burqa, they could enter the labour market, and went to school and university. But rates of domestic violence, child marriage, and sexual assault hardly changed. Did the changes create an environment where some women were able to prosper? Sure. But were there women who were raped while they slept? As well.

It is a joke to say that values such as “women’s rights”, “democracy” or “nation-building” were among the goals of the United States and NATO in Afghanistan.

It is a joke to say that values such as “women’s rights”, “democracy” or “nation-building”, etc. were among the goals of the United States and NATO in Afghanistan. The United States made deals with the Taliban behind closed doors: they were in Afghanistan to destabilize the region. They wanted to encircle rival powers, especially China and Russia, and control their economies through regional wars.

Overall, growing corruption, injustices, unemployment, insecurity, uncertainty, fraud, immense poverty and drug trafficking have paved the way in society for the re-emergence of the Taliban. And now, if the US decided to leave, it is due to its own weakness. Victim of the creatures of its own making (Taliban).

—For what reasons do you think the US decided to leave the country?

There are two significant reasons for this withdrawal. The main reason is the multiple internal crises in the US. Signs of the decline of the US system were seen in the weak response to the covid-19 pandemic, the attack on the Capitol, and the major protests by US society in recent years. Politicians were forced to withdraw troops to focus on internal issues.

The second reason is that the war in Afghanistan was an exceptionally costly war, costing trillions of dollars, all taxpayers’ money. This caused the United States to incur such huge debt that they had to leave Afghanistan.

Anti-war policies show that their goal was never to make Afghanistan safer, even less so now they’re pulling out. In addition, they also knew that the withdrawal would be chaotic, but they still went ahead and carried it out. Now Afghanistan is back in the news every day because the Taliban are in power, but this has been the situation for the last twenty years: every day hundreds of people died and our country was destroyed, even though the media rarely reported it. One example is the death of Farkhunda, an Afghan woman who was beaten to death by a mob of men who then burned her body and threw her into the Kabul River. This happened while “our president” Ashraf Ghani was present.

—What is the Afghan community in Catalonia campaigning for? Are any new mobilizations planned to air your voice?

The last rally we held was on 14 September in Plaça Sant Jaume. The message was clear: we want the Spanish government to commit to evacuating vulnerable families from Afghanistan. We will take more action, depending on how it all pans out. On 15 September, Eva Baró, councillor of the ERC municipal group, took our demands to the council’s commission for presidency.

We are asking Barcelona City Council, with immediate effect, to set up a committee to monitor the needs of the population of Afghan origin in Barcelona to offer guidance and support, both in personal matters and in the procedures and actions required to evacuate relatives threatened in Afghanistan, and to raise the needs detected to the Spanish and to the Catalan governments. Similarly, we are asking the City Council to reactivate the mechanisms of international action at its disposal, through multilevel governance, to promote asylum policies.

—Recently, there have been demonstrations by women in Kabul to fight for their rights. What is your appraisal of this?

I think if they shout once there, here we must shout ten times. Afghan women are very brave and this is the proof. Twenty years ago their mothers would not have taken to the streets, but they are not like the women of the 1990s. They don’t want the burqa, they want to work and participate in everything, just like men. Afghan women demanding equal rights from the Taliban! Brilliant!

—When the Taliban say that women will not lose their rights in this new era, are they credible?

The Taliban spokesman said there are no differences between their ideology in 1996 and now. And what they say about women’s rights are the exact same phrases used during their previous dark rule: implement sharia law. In addition, the Taliban would also like the West to recognize and take them seriously, and all of these claims are part of “painting” a new image of themselves.

Maybe in a few months they will say we will hold elections, since we believe in justice and democracy! These pretences will never change their true nature and they will remain Islamic fundamentalists: misogynists, inhuman, barbarian, reactionary, anti-democratic and anti-progress. In a word, the Taliban mentality has not changed and never will!

The Taliban mentality has not changed and never will!

—Does sharia or Islamic law allow women to have the same rights as men?

No. Like most religions, Islam doesn’t include equal rights for women either. Islamic or sharia law is imprecise and can be interpreted in different ways by Islamic regimes, in order to promote their own political agendas and rules.

—History is repeating itself in Afghanistan... Do you think the international community could do a lot more?

From the outset we could have predicted this result. The continuing attacks by the US and the rising number of innocent civilian casualties have given the Taliban an excuse. The inhuman US military empire is not only the enemy of the Afghan people, but the greatest threat to world peace and stability.

Now that the system is on the brink of falling, the duty of all peace-loving, progressive, left-wing, and justice-loving individuals and groups is to intensify their democratic struggle against the threat of the US. Replacing the rotten system with a just and humane system will free millions of poor and oppressed people and have a lasting effect in all corners of the globe.

Our fear is that the world may forget Afghanistan just like under the bloody rule of the Taliban in the late 1990s. Therefore, progressive people and institutions should not forget the Afghan women.