The aim of our research is to understand and simulate music creativity by modeling music processes and high-level music actions. We are especially interested in the development of machine learning techniques for building semantic models of different aspects of music creativity. We are interested in analyzing the semantic models in order to understand creativity and in developing intelligent music systems, such as music mining, information retrieval, and personalization systems. The lessons learnt by studying and modeling creativity in music are generalizable to other domains in which creativity plays an important role, such as design, architecture, and the arts.

As an instance of music creativity, We investigate the modeling of one of the most challenging problems in music informatics: expressive music performance. Expressive music performance studies how skilled musicians manipulate sound properties such as pitch, timing, amplitude and timbre in order to ‘express’ their interpretation of a musical piece. While these manipulations are clearly distinguishable by the listeners and often are reflected in concert attendance and recording sales, they are extremely difficult to formalize. Using machine learning techniques, we investigate the creative process of manipulating these sound properties in an attempt to understand and recreate expression in performances. 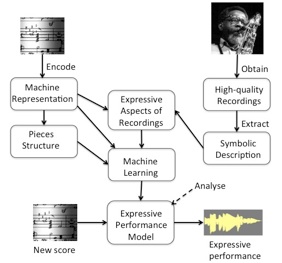 We are also interested in the use of emotions in brain-computer interfaces. Emotions in human-computer interaction are important in order to address new user needs. We apply machine learning techniques to detect emotion from brain activity, recorded as electroencephalograph (EEG) with low-cost devices. We are interested in low-cost devices because we believe that for my research to have impact in the general public, the technologies we develop should be affordable by most people as opposed to be restricted to be used in a laboratory. We are starting to apply these technologies in order to investigate the potential benefits of combining music and neurofeedback for improving users’ health and quality of life. Specifically, we investigate the emotional reinforcement capacity of automatic music neurofeedback systems, and its effects for improving conditions such as depression, anxiety or dementia.

Fig. 2. A wireless low-cost EEG device is used for controlling in real-time the expressive content of a piece of music (timing, dynamics and articulation) based on the emotional state of a user.

In this area, our research aims to build computational models able to predict the functional magnetic resonance imaging neural activation in humans produced by different auditory stimuli. We train the model with acoustic features extracted from auditory stimuli and the associated observed fMRI images. Thus, the model establishes a predictive relationship between the acoustic features extracted from the auditory stimuli and its associated neural activation. We show that the model is capable of predicting fMRI neural activity associated with the stimuli considered with accuracies far above those expected by chance. This work represents a natural progression from building catalogues of patterns of fMRI activity associated with particular auditory to constructing computational models, which predict the fMRI activity for stimuli for which fMRI data are not available yet. 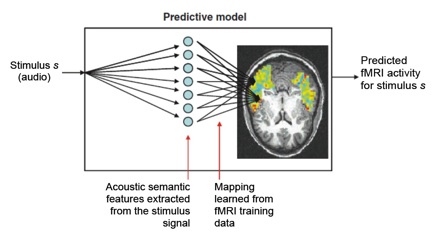 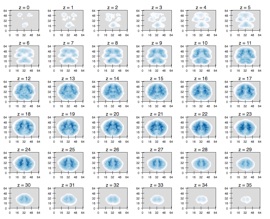 We are also interested in designing and applying machine learning algorithms for both feature selection and classifier training to the problem of discriminating instantaneous cognitive states produced by different auditory stimuli. This problem is also interesting from the machine learning point of view since it provides an interesting case study of training classifiers with extremely high dimensional (40,000-60,000 features), sparse (30-80 examples) and noisy data. We associate a class with each of the cognitive states of interest and given a subject’s instantaneous fMRI data observed, we train classifiers for predicting one of the classes. We train the classifiers by providing examples consisting of fMRI observations along with the known cognitive state of the subject.