More detailed descriptions of the work conducted for the project, as well as contact info for sourcing the HDR footage shot throughout the project can be found here: https://www.upf.edu/web/hdr4eu/publications. For the case of many challenges listed throughout the document, project partners already offer developed solutions. Their respective websites can be found here: https://www.upf.edu/web/hdr4eu/participants.

While we hope readers find these guidelines helpful, we acknowledge that the best way to learn how to create excellent HDR imagery is through hands-on experimentation. We strongly encourage the reader to produce their own HDR content and play a part in defining the medium.

Due to the COVID-19 pandemic, the final dissemination plan to showcase the project results and prototypes at an industry international event could not go ahead. Instead, partners agreed to create a series of videos that would highlight their contribution to the project in a form that would be attractive and understandable to a wider audience.
*Click on each image to play video
ARRI 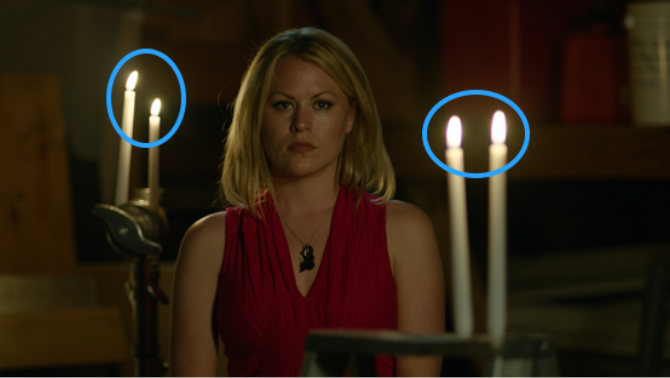 ARRI’s video demonstrates clearly the effect HDR has on steering the attention of the viewer, and how HDR and SDR may require different treatment so not to distract from the main focus of the story. Various examples show the considerations for practical lighting, for composition and camera movement when shooting for HDR.

While the visual impact and the heightened realism of HDR imagery work spectacularly well if used carefully, it also shows the dangers of ignoring the need for multiple versions for distribution. Critical HDR monitoring during the shoot is important for taking full advantage of the camera’s high dynamic range.

The video addresses the Directors of Photography and other content creators and helps building confidence in shooting for HDR by being open about the potential difficulties. 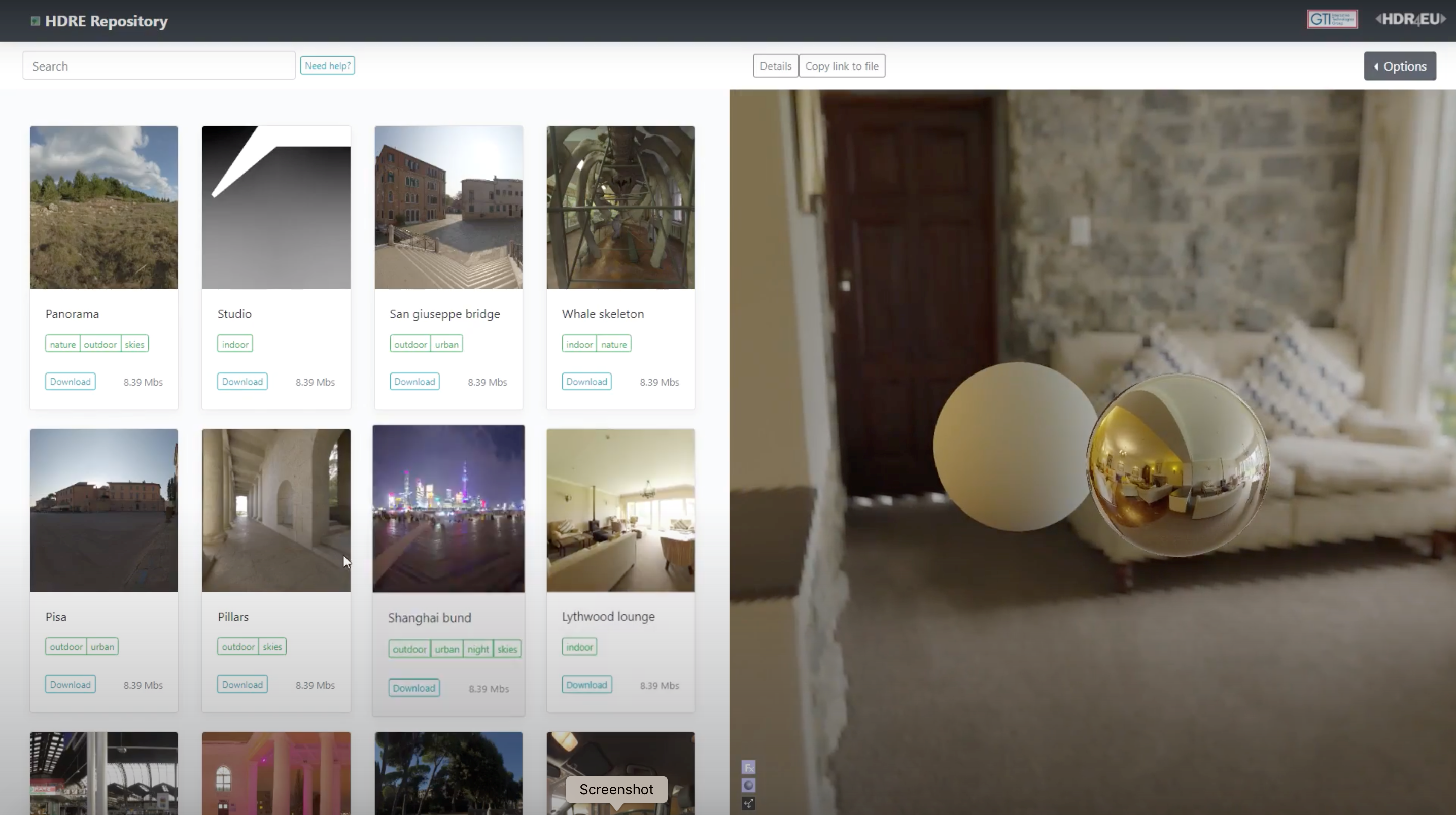 UPF-GTI demonstrate how the collaborative open webglstudio platform has been extended to incorporate HDR capabilities. They include a better way of assembling HDR images from a series of SDR images and improved collaboration through an improved toolset and the newly specified HDRE repository, which is also supported in Brainstorm’s eStudio product. The combination of a chromakeyer with environmental lighting and improved webgl based photorealistic rendering complete the demonstration.

The video addresses the large community of not-yet-professionals and shows how a new generation of content creators can get familiar with HDR, explore its advantages and build confidence in the underlying technology.

UPF-IP4EC give a detailed demonstration of why a good understanding of our visual system is an essential element in developing effective HDR technology. Many different aspects are covered – how we can minimise colour appearance errors when interchanging materials between colour critical observers in a wide gamut environment; how colour adaptation is not dependent on screen size but on environmental illumination; how tone mapping and adaptation to different viewing environments can interact with each other and what that means for an optimised tone mapping and inverse tone mapping algorithm; how induction effects –which describe how colour perception can vary with our field of view– can be compensated for; and how the same model can be used for gamut mapping to produce visually equivalent results on displays with smaller display gamut.

The video presents this genuinely groundbreaking academic research with clear visual examples in an understandable form, showing both the relevance of this research for the practical implementation of HDR tools as well as the further understanding of how we perceive and decode colour information in response to different viewing environments.

The research has been submitted for publication in the relevant academic vision science publications and is bound to find interest well beyond the specific field of HDR content creation and consumption. 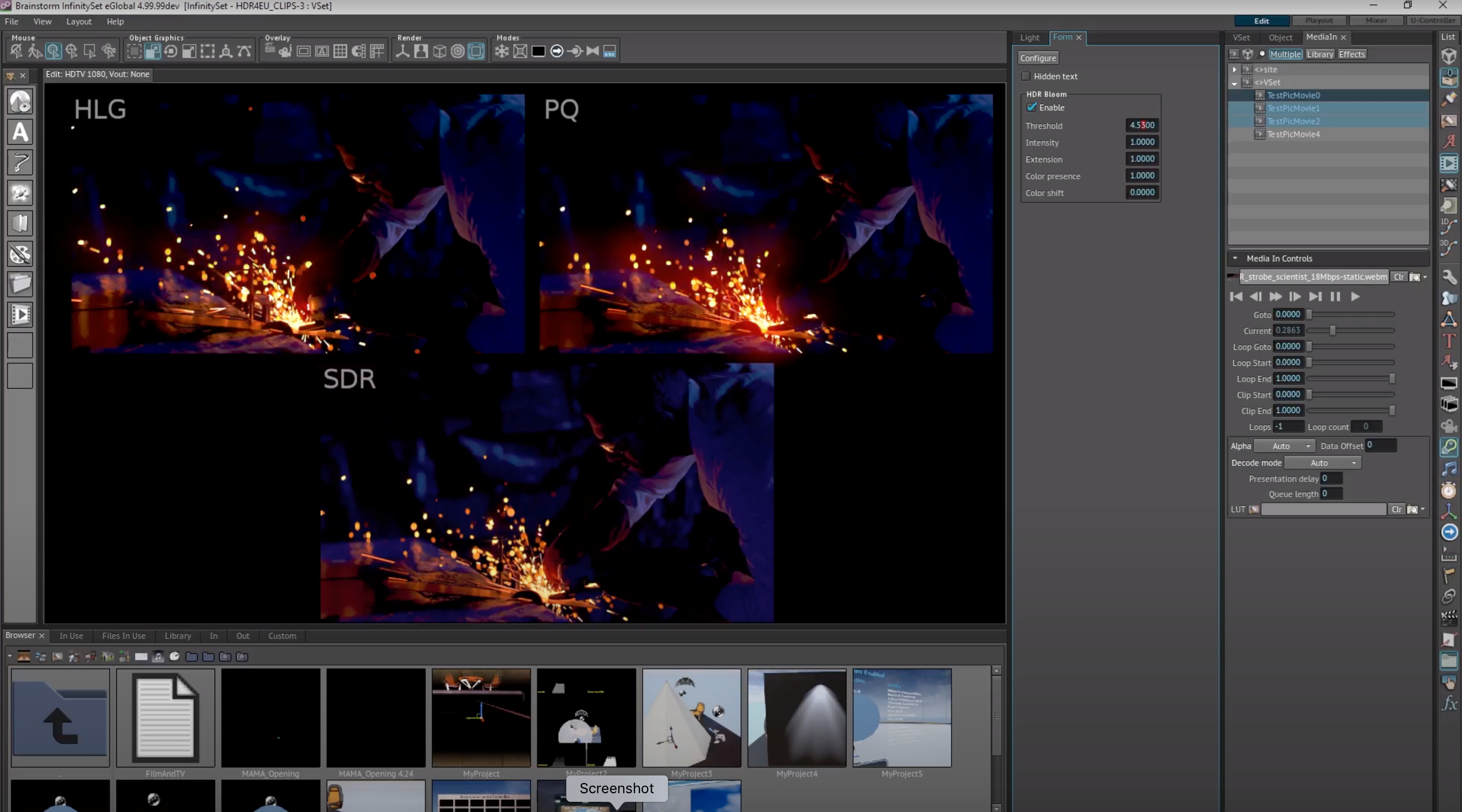 Brainstorm demonstrate how their well-established and industry-leading virtual studio product eStudio was updated to include HDR capability. To maintain maximum flexibility, this required the introduction of a colour management layer with support for external LUTs, so SDR and HDR content could be used simultaneously, as well as producing SDR and HDR content in various industry standard formats.

In turn this required a re-write of the internal rendering engine, introducing more photorealism and physics based rendering even for SDR workflows. The support of the HDRE file format developed by UPF for 3D assets shows close integration between partners. The inclusion of an automatic exposure control tool as well as an eye-adaptation tool show the application of the project academic research in the commercial product.

The video addresses the broadcast market, which is pushing for practical and productive solutions in the area of live-action virtual studio production. With Brainstorm working in close cooperation with its clients, industry acceptance and adoption will follow. 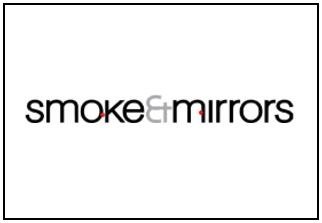 Smoke&Mirrors have contributed a document about the practicalities of HDR production and post-production, specifically for broadcast commercials. It contains a large number of practical considerations when considering an HDR production. Clearly aimed at their commercials clients, it encourages them to take full advantage of the creative possibilities.
FilmLight 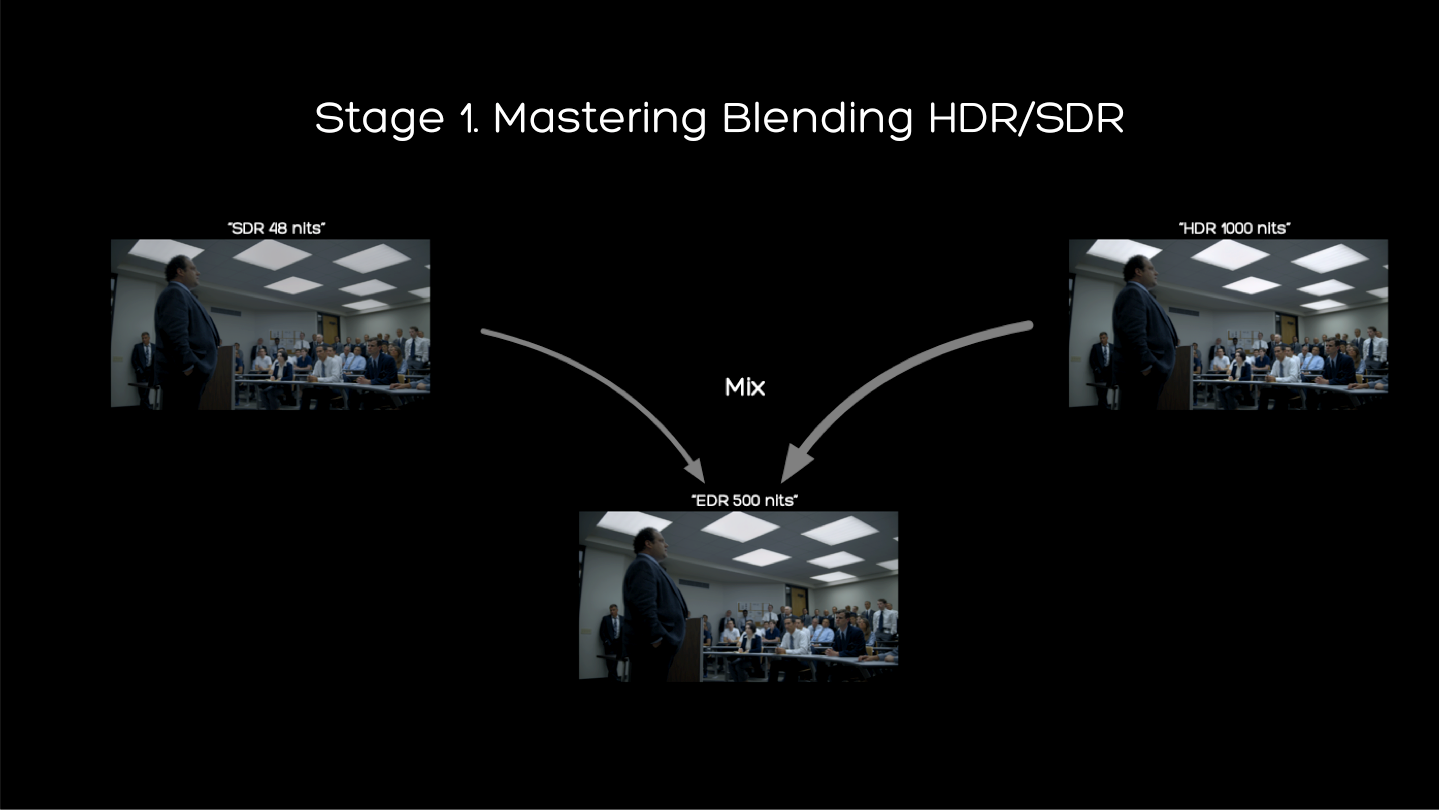 FilmLight structures the developments for its Baselight mastering and finishing system around colour tools, spatial operations and temporal considerations. Like Brainstorm, FilmLight saw the need to introduce a comprehensive colour management framework, covering all input materials and output formats, whether producing content in SDR or HDR or both. At the same time, it introduced a new colour grading paradigm based on a “scene referred” workflow, providing more natural, photographic controls to image manipulation and making the simultaneous mastering of multiple deliverables more efficient and consistent.
The video addresses the post-production community and demonstrates that multiple deliverables for any range of viewing environments can be handled with confidence and high productivity. This reflects the feedback from within the industry.
BARCO 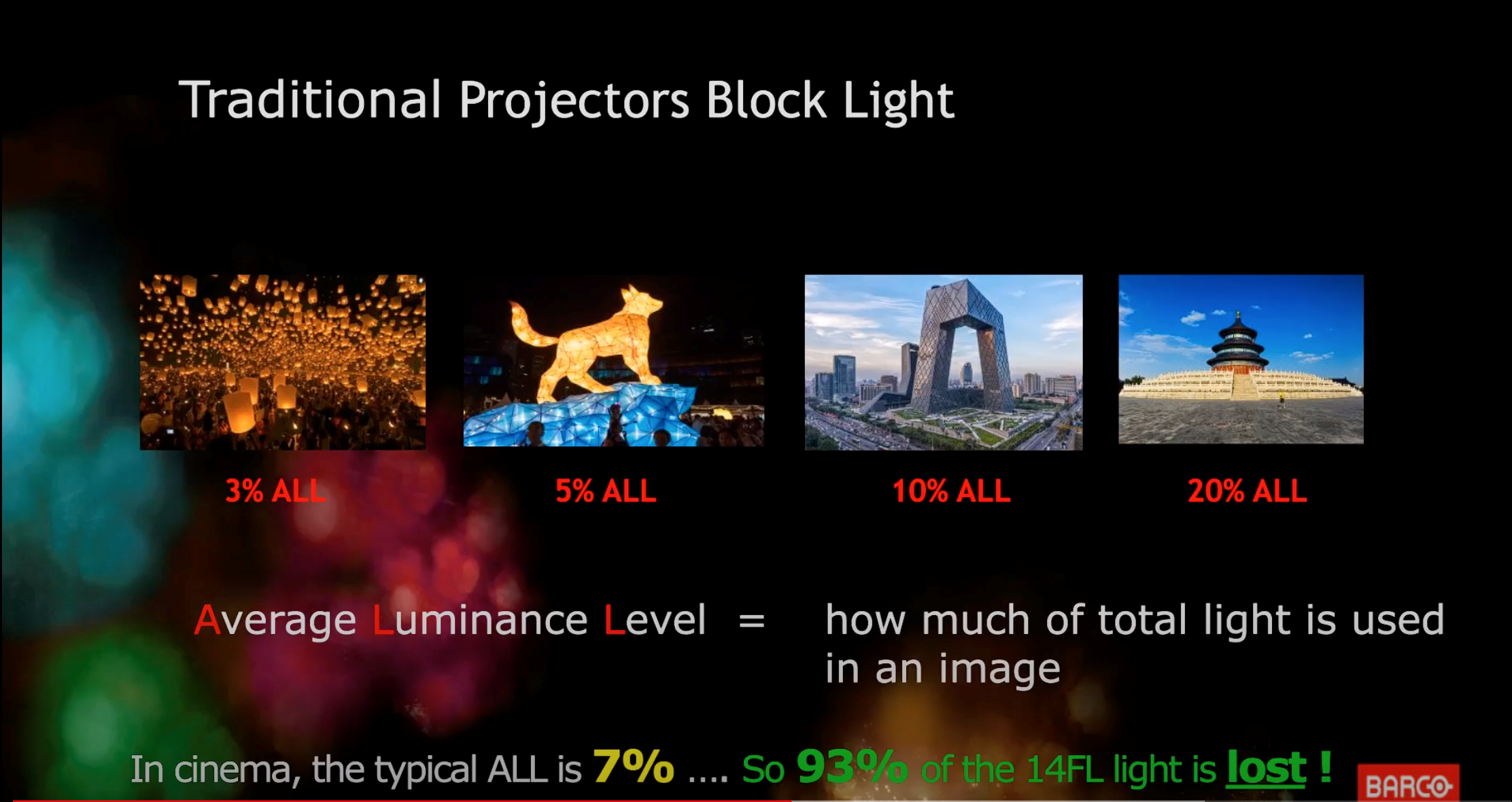 The video from Barco starts with a close look at what HDR actually means in relation to existing display and cinema technology. It goes on to explain the underlying considerations that lead to the choice of technology for their HDR cinema projector, highlighting practical considerations like power consumption and conversion costs for existing cinemas, but also taking into account our visual perception and the special immersive cinema environment.
It looks at the steps required for a complete HDR eco-system, and explains Barco’s involvement in international standardisation efforts and its collaboration with the project partners to bring it about. Barco’s role as the leading cinema projector supplier will be critical in the successful deployment of HDR in the cinema.

During the course of the project 3 technical shootings were performed with the objectives of:

1. Initial HDR Technical Shooting: S&M and all partners suggested to ARRI a list of content to be captured that would later be used for testing techniques, creating exemplary content and evaluation of the HDR tools and pipeline. The shooting was done with provided equipment and resulted in test material for various applications of HDR, such as: Scenic productions, Documentary, Sports, Stage shows and concerts.

2. Enhanced HDR Technical Shooting: The second technical shooting allowed partners to shoot content using their enhanced HDR tools already developed by the project. The shot footage was a combination of:

S&M and all partners suggested to ARRI a complete list to shoot during this second phase of the project and the footage allowed S&M to do their benchmark evaluation.

3. Production Shooting: The final shoot was an actual production in which S&M engaged with one of its clients to arrange on-set access so that the tools would be used in a proper production environment. This allowed the footage to subsequently be used for further validation and demonstration of the HDR pipeline and tools. S&M used the captured footage as part of their Global Professional Validation.

D6.3 - S&M - Documentation and Publication of global user studies of working with and visualising with enhanced HDR tools