PreMSI pursues to capitalize on ongoing brain activity before stimulus appearance (i.e., Pre-Stimulus), to forecast perceptual outcome multisensory interactions (MSI).  The framework is based on empirical findings and theoretical developments in Cognitive Neuroscience that have made a solid case for the relevance of pre-stimulus neural oscillations in ensuing cognitive processes. These neural oscillations emerge from fluctuations in neural excitability, and are reflected in rhythmic electrical activity that can be picked up in EEG (Electro-encephalography). Here, we propose to develop a research program in three stages with the following goals: First, to describe correlations between relevant pre-stimulus oscillatory activity and the outcome of cross-modal attention switches, and cross-modal simultaneity perception; Second, to predict the outcome of these multisensory processes proactively, based a-priori on known relations discovered in the first stage; And, Third, to cause (or modulate) these multisensory interactions via hypothesis-driven neurostimulation, based on the results of the second stage. The main outcome of PreMSI will be to discover the principles that allow the anticipation of the outcome of (multisensory) perception on the basis of EEG prior to stimulus appearance. If this is achieved, one can then gain a rather clear, causal picture of the brain mechanisms underlying these multisensory interactions. This objective will lead us to face individual (person to person) variability and trial to trial fluctuations in brain activity and behaviour. Solving these problems will be both a challenge but also offer an opportunity to gain a more precise understanding of the relationship between brain activity and perception. As a consequence of this, a wider impact of this project is that it will provide a framework for strict, solid testing on extant theories about brain-behaviour relationships, not only in the case of multisensory interactions, but more generally. The results may also bear some impact for applied neurotechnology, because our results should provide empirical foundations for neural control signals in some Brain Computer Interface (BCI) scenarios. To achieve the immediate objectives of PreMSI in terms of discovering the principles of multisensory interactions, and get closer to the overarching, longer term goals, we involve a local work team with expertise in experimental psychology, signal processing (physics) and neuroimaging, complemented with top international collaborations from UK and The Netherlands. The methodological approaches will include psychophysics, EEG, Magnetic Resonance Imaging (MRI), transcranial Alternate Current Stimulation (tACS) and, neuronavigated Transcranial Magnetic Stimulation (TMS). The analytical procedures will involve power estimation from EEG (in time/frequency), as well as more sophisticated estimations of phase-dependency between EEG and behaviour, such as phase bifurcation index and coherence measures in sensor and source space (Phase-lag, and Phase  Locking Values). This project has the strategic goal of fostering frontier knowledge, internationalization and, to some extent, technological transfer. These strategic goals are pursued with an international dissemination plan, a training plan for prospective PhD students, the engagement of innovation agents and, the alignment with technological transfer initiatives in neurotechnology. 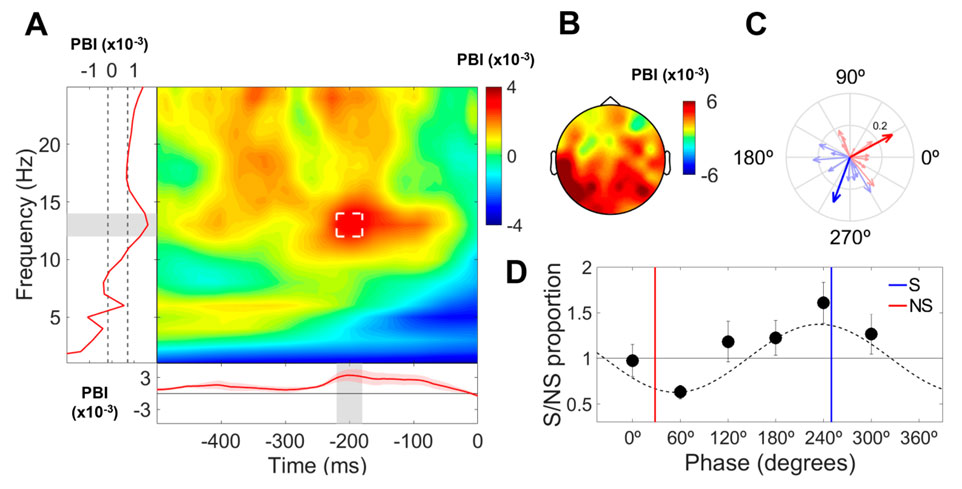 Figure. Effects of pre-stimulus oscillatory phase on audio-visual temporal simultaneity judgments. A. Phase bifurcation index (BI) group averaged across all channels. Horizontal axis denotes time (0 is the onset of the auditory stimulus), and vertical axis depicts frequency. Positive values indicate that phases for simultaneous and non-simultaneous percept are concentrated and different. Negative values indicate that for only one of the two possible simultaneity percepts the phase is concentrated. Left inset depicts PBI averaged across time points in the pre-stimulus interval and the two dashed lines represent the 95% confidence interval). The main difference was found in the 13±2 Hz range. Bottom inset depicts BI at 13 Hz, with a maximal BI around 200 ms preceding the first stimulus onset. B. Topographical distribution of the phase effect at 13±2 Hz, 200 ms before the auditory stimulus onset. Phase opposition was stronger at electrode TP9. C. Mean phase angle for simultaneous (blue arrow) and non-simultaneous (red arrow) perception and the corresponding individual phase angles (thin arrows). The length and the direction of the arrows indicate the degree of concentration and the average phase, respectively. D. Relationship between the oscillatory phase at 13±2 Hz, 200 ms pre-stimulus and the modulations in simultaneous/nonsimultaneous (S/NS) proportion of percepts on audio-visual synchrony perception (6 bins). Mean group phases for simultaneous (S, blue vertical line) and non simultaneous (NS, red vertical line) perception are displayed. The dashed line represents the sinusoidal fit of phase-perceptual outcome data.