Olive cultivation is widespread throughout the Mediterranean and is vital for the rural economy, local heritage and environment. The area under olive groves in the EU is approximately 4.376.000 hectares, 4 % of the agricultural area. Approximately 2.5 million producers (one  third  of  EU farmers) are involved. Olive production is the main source of employment and economic activity in many regions, and the sector is basically dominated by SMEs united in associations. The average holding size is as low as 1 ha in Italy, though olive holdings in Spain are larger (6 ha on average) and the annual net income per hectare can reach €1.897. 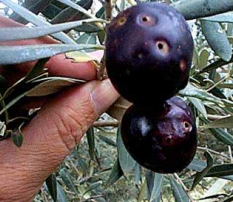 The EU is the leading world producer, accounting for 80% (>2 million tonnes) and consuming 70% of the world’s olive oil. Turkey, Tunisia, Syria and Morocco produce over 0,5 million tonnes. The main aim of the €2.3 billion/year EU Olive oil common market policy is to promote the production of a high-quality product for the benefit of growers, processors, traders and consumers. However this sector is continuously under the threat of an extremely destructive insect pest: Bactrocera oleae, the Olive fruit fly. Each year it accounts for more than 30% destruction of all Mediterranean olive crops, i.e. losses of almost €3.0 billion.

Stings caused by females laying eggs destroy the value of table fruit and damage of larvae causes premature fruit drop. Females can lay 50-400 eggs, one per fruit, there can be several generations and populations develop rapidly. Adult flies can live 2-6 months depending on temperature and food availability. Olives are the only breeding hosts under constant threat from March until November, and the greatest damage occurs as the fruit begins to ripen (September to November).

In Europe, the tolerable fruit damage threshold for table fruits is only 1% and for oil is 10%. Despite the higher tolerance, the problem for oil is that while feeding, the larvae introduce rotting organisms (bacteria and fungi) that create off flavours.

In the Bactrocera oleae is controlled with aerial and ground bait pesticide sprays, but their efficiency depends on knowing the time and location of insect infestations as early as possible. So producers set up traps in the field that lure and capture Olive flies, to detect and count them. But these traps can also accidentally capture other species of insects rendering the counting difficult. Species specific pheromones may be used, but these only attract males. To capture females food lures are used, but are generic and attract other species. So periodically the producer has to inspect traps to identify and selectively count only Olive flies. 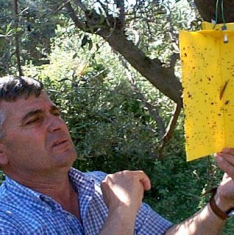 Based on this tedious and rudimentary Integrated Pest Management (IPM) methods, producers can only make an “educated guess” on the need to spray pesticides, and in between inspections a serious infestation may occur. This procedure (identifying, counting and  spraying) needs to be repeated throughout most of the year, but many traps only have a life-time of 1 month and need to be replaced. Inevitably the producers compensate the faulty IPM  procedures with excessive spraying of pesticides, which affects natural enemies of the pests, contaminates water, and carries the risk of exposure to humans. Moreover, aerial sprays will be banned by the EU to limit the risks of human exposure, reinforcing the need to  improve  IPM  trapping  procedures and ground spraying. The Sterile Insect Technique cannot be applied  in the EU, where cultivation is organized in small nuclei.

Although €5 billion are spent yearly on pesticides in the MED-8 countries Spain, France, Italy, Portugal, Greece, Cyprus, Slovenia, Malta), this investment doesn’t solve the problem of  infestations. Interviewed Olive growers stated two problems: a) the manual counting is not correct because it is done in a hasty way and decisions of when to spray are taken based on the few manually inspected traps; b) Small cultivators usually join and hire a service to spray based on findings in step (a). However, the spraying is many times performed without following correctly the spraying charts.

INOLEO, AJAP and AEGEAN state that in the absence of an accurate monitoring and alarm system, farmers generally over-sprayto levels of more than 30%, often in vain. The cost of infestation by Olive flies is in the best case an inferior product, reducing the revenues by up to 50% for superior extra virgin olive oil, up to 80% in total oil value and in the worst case the loss of a whole harvest (100% loss). For this reason, the SME-AGs INOLEO, AJAP and AEGEAN together with TEIC developed the concept behind ENTOMATIC and, with the participation of key SMEs PHYTO, PULS and BIOSYS, decided to lead this project for which the RTD subcontractors were selected based on their experience and value for money.

The ENTOMATIC system aims to offer EU Olive SME-AGs an advanced IPM system for Bactrocera oleae, based on an innovative trap capable of automatically counting each insect trapped, identifying the species based on bioacoustic analysis and send the data wirelessly. The proposed system will also be able to function autonomously during the whole fruiting season, have an operative life-time of at least 5 years and be adapted to handle other fruit flies.

IPM relies on the accuracy of the pest population monitoring technique. Without gathering information of pest dynamics and related ecological factors it is almost impossible to execute the appropriate pest control at the right location and time.  Studies in Greece and Spain using extended monitoring programmes with a combination of different state-of-the art traps, more frequent inspections of traps, extensive manual count and species identification of captured insects, and manual processing of collected data shared between regional and national authorities, demonstrated that the fruit losses provoked by the Olive fruit fly could be reduced in more than 50%, with a 60% reduction of insecticides and 60% increase of extra virgin oil.

Obviously the cost, the effort and complexity of laborious massive manual inspections and manual treatment of data is not affordable for producers. It is evident that existing IPM systems do not fulfil the need of the Olive industry as these are not autonomous or collect and send data automatically. Moreover, EU regulations aim to promote low pesticide-input farming and urge the establishment of novel and better IPM techniques and crop specific standards. With the recent developments in microelectronics, communications and bioacoustic analysis, finally a cost-effective solution may be developed with the expertise of  the subcontracted RTDs UPF, TEIC, IMMS and AVIA.

Our aim is to develop an easily accessible system, which enables automatic and cost-effective IPM for Bactrocera oleae for all end users. In addition, the proposed system can be a powerful tool in the hands of regional/national authorities to enforce legislative requirements, which need  data collection on a regular basis to achieve a sustainable use of pesticides. The ENTOMATIC system will enable the Olive SME-AGs and their members to improve their production, reduce the amount of pesticides used and reduce the labour cost associated with spraying activities and inspection of traps. Based on published studies, the experience of the consortium SME-AGs and SMEs and interviews with several producers, the participants expect a reduction of the Olive fruit fly damage, a reduction of spraying costs and an increase of productivity, using ENTOMATIC. 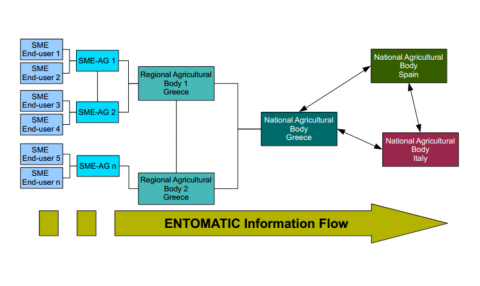 The ENTOMATIC trap units are easily installed in olive trees by the end-users. According to modern IPM procedures for the deployment of Olive fruit fly traps, for small holdings and in field of uneven topography a density of 2-4 traps/ha will be used. One ENTOMATIC trap will be deployed for every two hectares of large scale fields of homogeneous lands. Within the same field the traps form a low-power mesh network, capable of wirelessly communicate between each other to finally send the collected data to the ENTOMATIC Gateway.

This gateway, equipped with a meteorological station, transmits the field data to the ENTOMATIC Monitoring & Management Central (using a link like GPRS/GSM or Wi-Fi). This central is hosted by a Cloud Provider, which makes the collected processed data available on internet. The end-users can use the on-line platform as an easy to access the IPM tool, using just a common laptop, a smart-phone or a tablet PC.

ENTOMATIC will enable the possibility to set-up of a European Network for Integrated Olive fruit fly Pest Surveillance, adaptable for other flying insect pests. The ENTOMATIC systems in each Olive growing SME are connected to their respective SME-AG. The information collected by each SME-AG cluster provide Pest information at regional and national scales, giving authorities a powerful tool to understand at a higher level the impacts and risks imposed by the presence of the pest. EU countries using the ENTOMATIC system can share their data at a transnational level.

How does the automatic trap work?

Flies (males and females), attracted by the combination of baits and lures, seek an entrance into the trap, and are detected by a photointerrupter. Since the fly may have erratic movements or even leave the trap, the count is only processed when it passes by the second photo-interruptor. As soon as this happens, the Bioacoustic Identification system starts recording the audio signals produced by the fly. 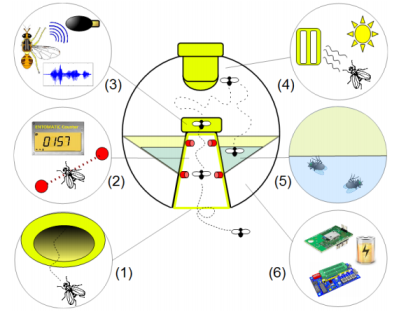 The digital signal processing at the Gateway will identify if the species entering is Bactrocera olea or not. The fly will not return where it came from, since it will be lured to the pheromone bait and by the sunlight or to the liquid food lure where it will eventually drown and die. All the electronics (signal processing, communications, power, etc.) are placed at the bottom part of the trap. The data collected as well as the position of the trap (GPS) and weather data will be transmitted from the Gateway, feeding the management central software.