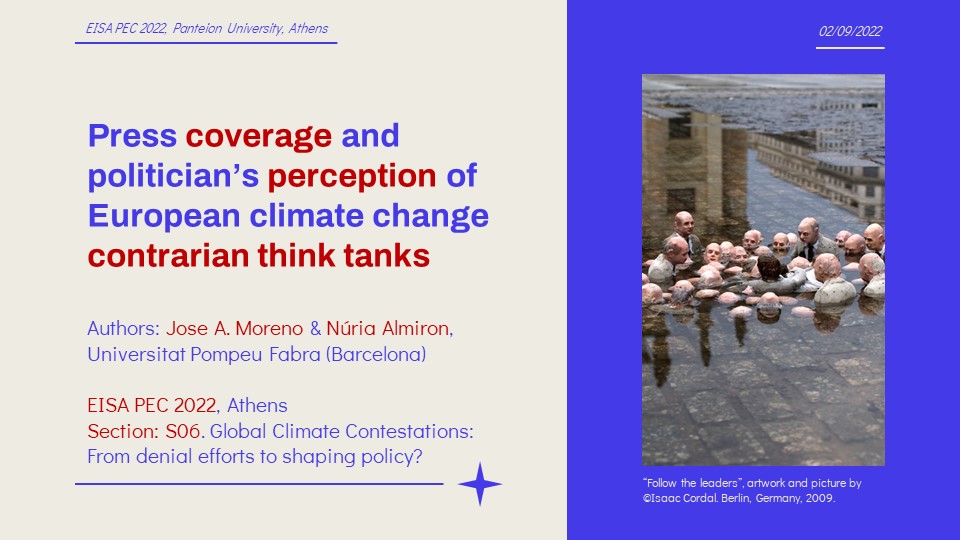 THINKClima members Jose A. Moreno and Núria Almiron co-authored a paper presentation entitled "Press coverage and politician’s perception of European climate change contrarian think tanks". This paper was presented by Jose A. Moreno in order to show findings obtained during his thesis linked to the THINKClima project. The conference, organized by the European International Studies Association (EISA), took place at the Panteion University in Athens, Greece, from 1st to 4th of September, 2022. Under the general topic "Pandaemonium: Interrogating the Apocalyptic imaginaries of our time", this conference reviewed different threats to the human society such as climate change, pandemics, artificial intelligence, and others.

The paper was presented in the section "S06 - Global Climate Contestations: From denial efforts to shaping policy?". This is the abstract:

The role that think tanks have played within the right-wing climate countermovement has been researched in the USA but not enough in Europe. We are beginning to see evidence of climate action contrarian discourses from some European think tanks, but we still do not really know their impact. To measure the influence of climate action contrarian think tanks is a complicated, if not methodologically impossible, task. However, we can look at indicators such as media presence or politician’s perceptions to see their degree of appearance in the media and political discourse. This paper will present original results of a doctoral research on the press coverage and politician’s perception of the 13 most relevant European climate change contrarian think tanks. Firstly, this research shows the outcomes of a content analysis of more than 1,000 mentions to these think tanks in all the European newspapers available on Factiva since the foundation of each think tank until December 2020. Results show that more than 85% of the press mentions were to the three British think tanks of the sample: The Global Warming Policy Foundation, the Institute of Economic Affairs, and the Centre for Policy Studies. The analysis includes a coding of the tone into positive, neutral, or negative, to check whether the newspapers supported or criticized the stance of the think tank. Secondly, this paper presents results from a survey and interviews to find out the extent of knowledge in the European Parliament about these and other think tanks in relation to climate change. To this end, a survey to members of the European Parliament (MEP) and interviews with their assistants have been carried out. The purpose is to find out how think tanks are used in their policymaking, with a focus on climate issues.