Dr. Sergi Jordà holds a B.S. in Fundamental Physics (1986) and a PhD in Computer Science and Digital Communication (2005). He is a senior researcher at the Music Technology Group of Universitat Pompeu Fabra in Barcelona, where he directs the Music & Advanced Interaction (MAIn) team, and an Associate Professor in the same university, where he obtained his tenure-track position in 2011, and where he teaches courses in Computer Music, Audio Signal Processing, Human Computer Interaction (HCI), and Interactive Media.

During his undergraduate years in the 1980s, he discovered computer programming and decided to fully devote himself to live computer music. Throughout the 1990s he conceived and developed award winning interactive installations and multimedia performances, in collaboration with internationally renowned Catalan artists such as Marcel·lí Antúnez or La Fura dels Baus.

Back in the academia since the late 1990s, his current main research interests are in the confluence of HCI and tangible and musical interaction, in the application of novel interactive techniques in education, and in the possibilities of augmented communication using tabletops and brain computer interfaces. He has authored more than 20 articles in journals and book chapters, more than 50 peer-reviewed conference papers, as well as given more than 20 invited presentations and keynote talks. He has participated in more than 30 international scientific committees, in 3 of them as program chair, having just recently been the conference co-chair for TEI'13, the 7th International Conference on Tangible, Embedded and Embodied Interaction. He is also a member of the Tangible and Embedded Interaction (TEI) steering committee.

He has received several international awards, including the Ciutat de Barcelona (1999 and 2007) and the prestigious Prix Ars Electronica Golden Nica (2008). He has participated in 6 founded projects both from the EC and the Spanish government (in 2 of them as the IP). He is currently best known as one of the inventors of the Reactable, a tabletop musical instrument that accomplished mass popularity after being integrated in Icelandic artist Bjork's 2007-08 world tour Volta, and since 2009 he is one of the founding partners of the spin-off company Reactable Systems. 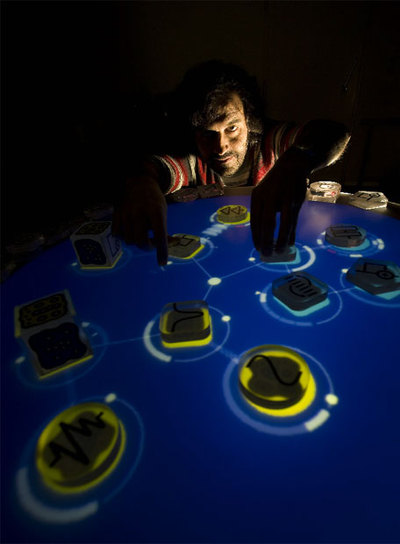 Dept. of Information and Communication Technologies