Data in R can be stores in variables (also referred as RObjects) of different data types. The most frequently are vectors, lists, matrices, factors and data frames. The data contained can be of class:

To assign values to variables we use " <- ", for instance

When a variable or a vector class is unkwown, use the function class(variable_name).

Vectors with multiple elements are created using c(), a function to combine elements.

Lists are created using list() and it can contain different types of elements such as vectors, functions and even further lists.

To create them we use matrix(vector, nrow, ncol, byrow). For instance:

To access to the elements of a matrix, we need to specify the row (or rows) followed by the column (or columns) of interest.

Factors are created from a vector using factor(vector). It stores the vector and its unique elements. Each level corresponds to a unique element.

Unlike matrices, they can store different types of elements. They are generated using data.frame(). When importing a table from a .txt or .xlsx file, R will automatically read it into a data frame object.

We access data frames the same way we do with matrices

Additionally, you can access to columns by its name:

These operators compare each element of the first vector to the corresponding element of the second vector and return a boolean value (TRUE or FALSE).

In order to import data in the R global environment, you can use read.table, a function that imports text or comma-separated files into a data frame. read.csv and read.delim are some of the other available functions for this purpose. However, they only differ in the default arguments (header, separator,…).
You can also use the global environment menu. Just look for the “Import Dataset” button.
To export a data frame from the R global environment to a text or comma-separated file, you can use write.table and write.csv among others. Basically, you need to specify which is the data frame variable that you need to save and the filename. Additional arguments can be given to determine the field separator, among others.

Then, to load the package and use it:

How to create use-defined functions?

To write a function we need to take into account:

The syntax is as following:

An example to calculate the product of two numbers:

If there are more than two alternatives:

The “apply family” consists of a set of functions to manipulate different types of data (arrays, lists, data frames) avoiding the explicit use of for loops. They are less intuitive than the latter but more efficient. 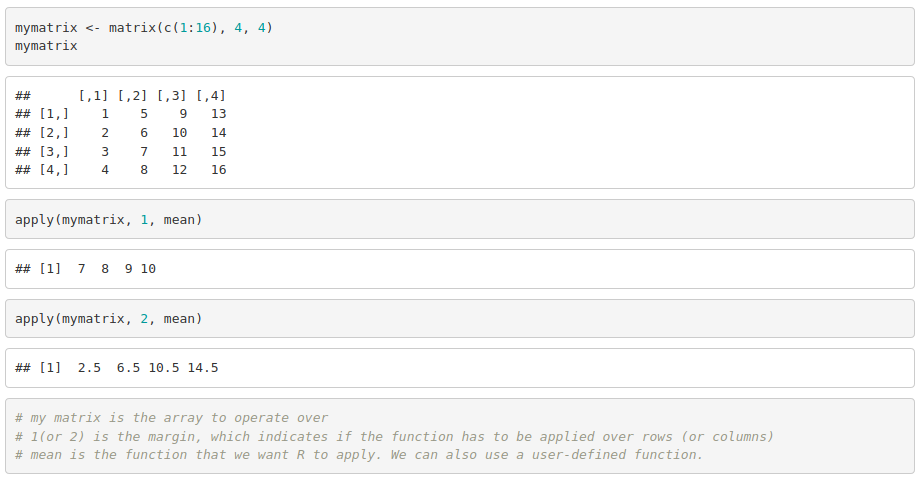 Plotting in R with ggplot

The basic syntax is:

Some notes about it:

There is a public ggplot2 cheat sheet, which is very useful for checking the syntax and to see the wide range of options that the package provides.

Now, let’s make some plots using ggplot2 using the USArrests dataset included in R ( to use it just write data("USArrests") ). First of all, you need to upload the library:

Next, to make a scatterplot of the assaults per urban population: 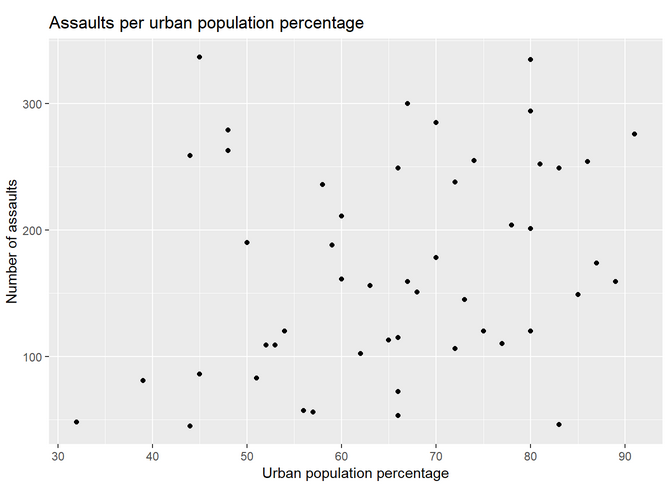 Let’s adjust a curve to the data by adding geom_smooth(): 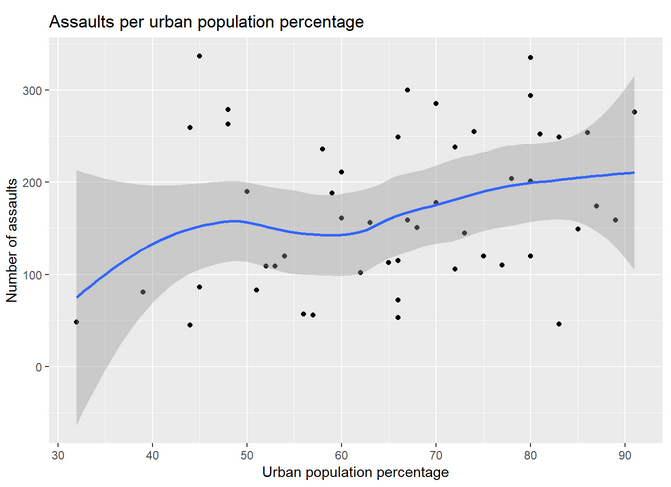 The line plot with ggplot is done with this command: 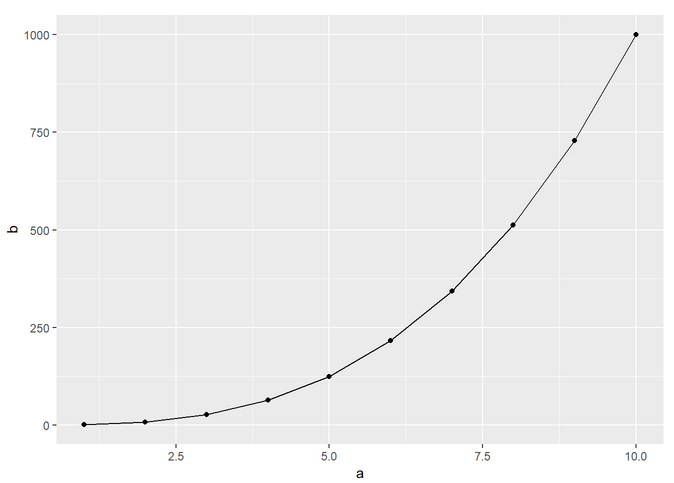 Let’s plot the lines for all the variables of USArrests. To do so, we need to modify the data frame so that we have a column with the type of crime and another column with the number of crimes (instead of a column per crime). By doing so, we are transforming the data from wide to long format. Once done that, we just need to specify in the aesthetics that we want to color the lines by crime. See: 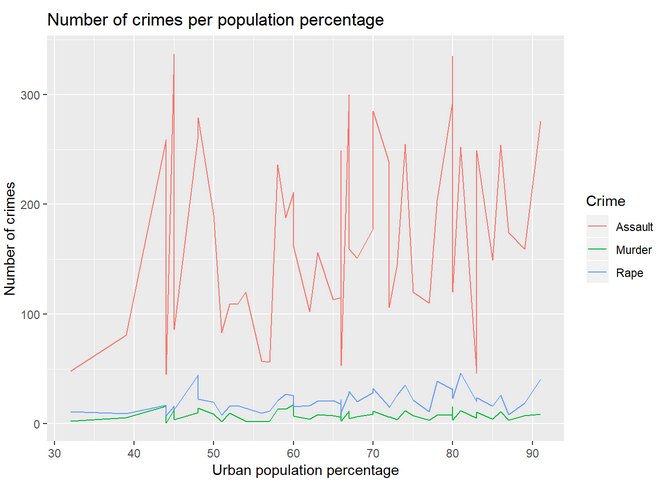 And to plot the bar chart of the same data: 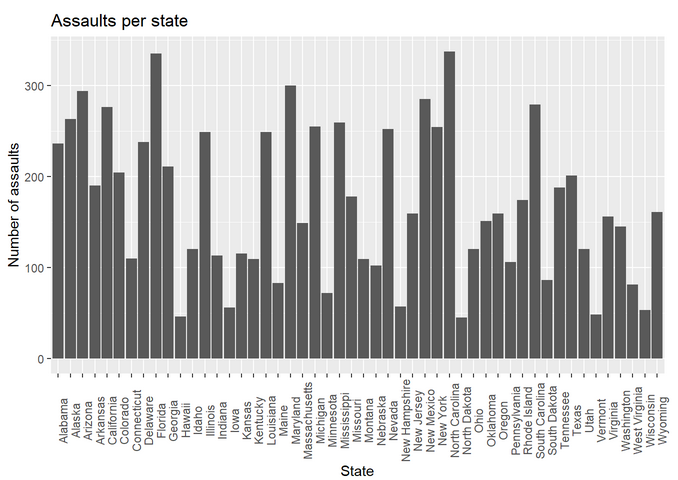 Let’s represent in the same bar plot the number of each crime. Here we also need the long format data frame to specify that we want different filling colors per crime.

The corresponding plot is: 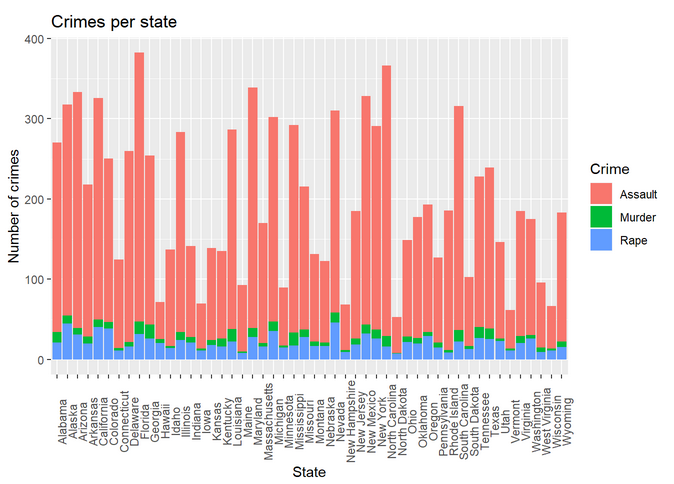 The histogram with larger bin size and no color: 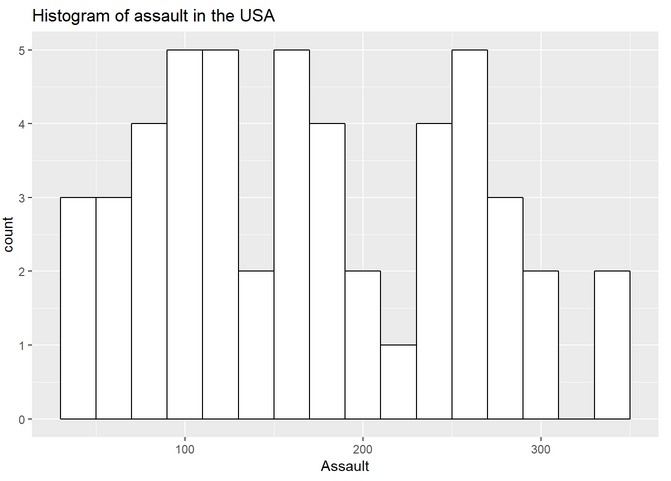 Again, we represent in the same histogram all the crimes:

Since we use "fill = Crimes", we will have the histogram represented with distinct colors for each crime: 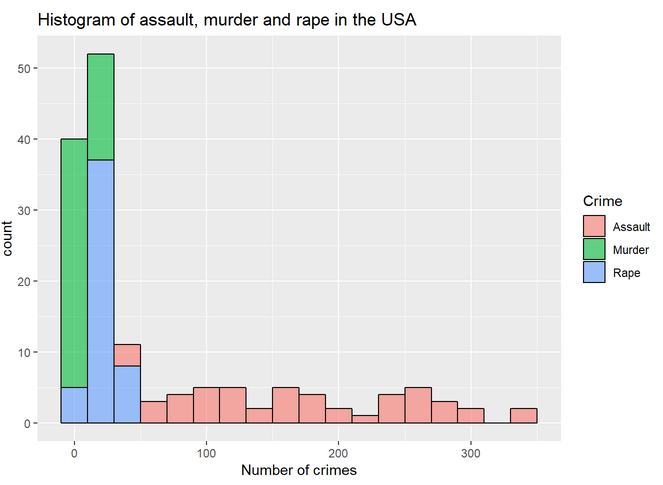 We also can plot boxplots with ggplot: 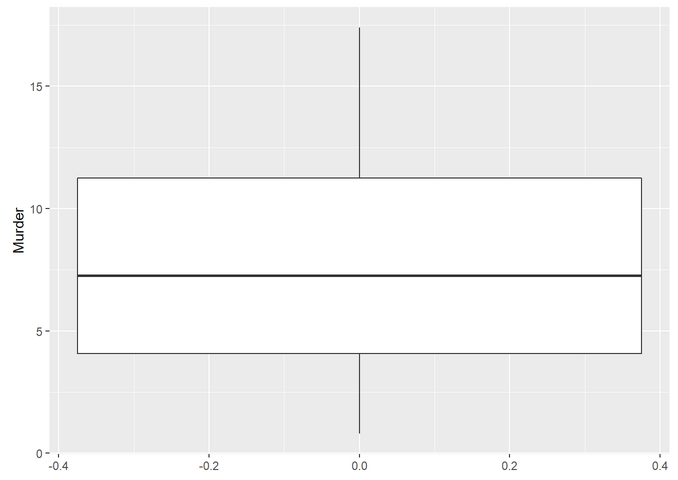 Finally, let’s make a boxplot with all the crimes: 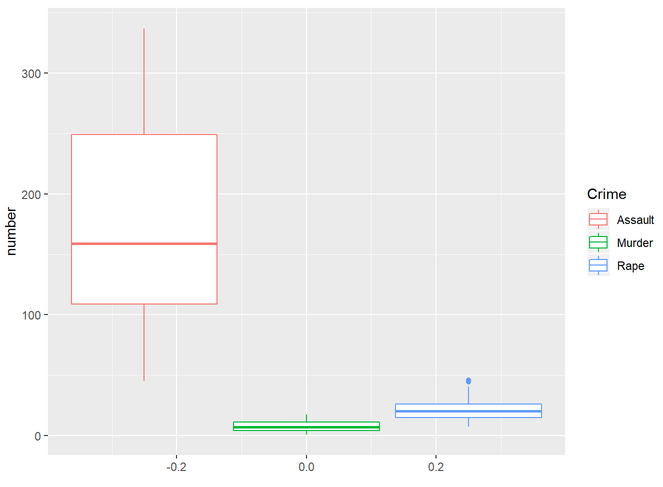 Usually, when we collect data from an experiment or download it from a public database we want to test if a hypothesis is true. Statistical tests can be parametric or non-parametric. Parametric tests assume:

The central limit theorem determines that distributions of sufficiently large samples (>30) tend to normality. Because of that, sometimes people do not assess the normality of their data. For other cases (or if you just want to make sure), normality can be assessed by visual inspection or by significance tests.

We can also check with a qq-plot: 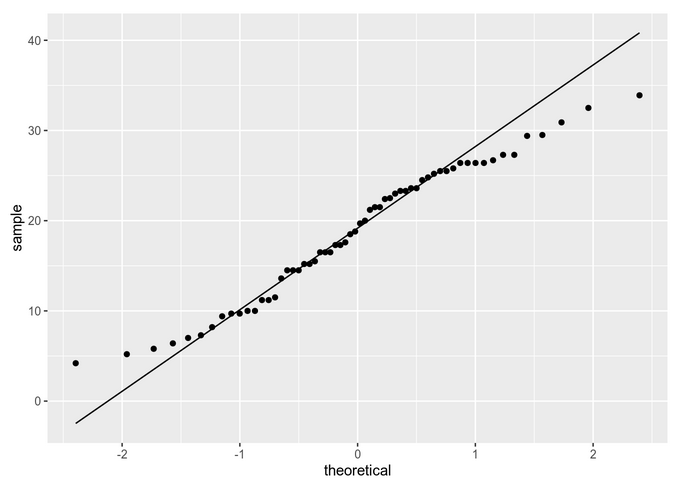 In theory we should be checking normality by group. To simplify, we are going to be comparing the same dose of Vitamin D (2 mg/day) for the two delivery methods. So, for instance: 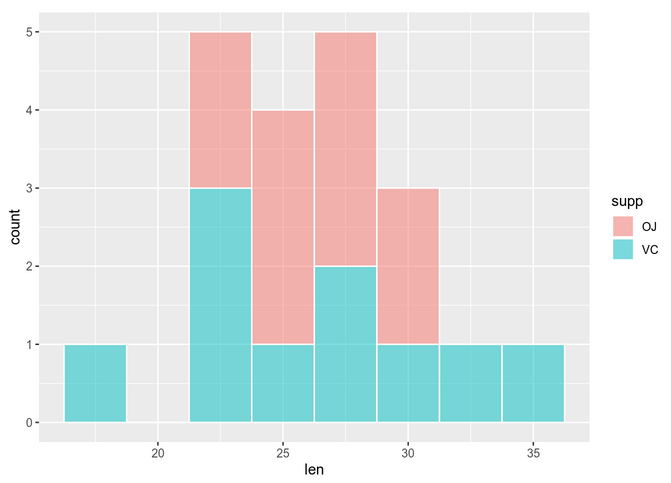 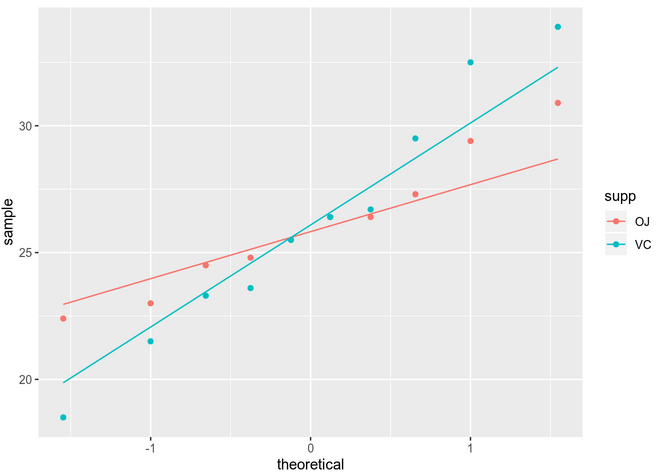 You can see that assessing normality can be quite subjective if we just use visual methods. Some of the mostly used significance tests to objectively test normality are: Kolmogorov-Smirnov (K-S) and Shapiro-Wilk’s test (better power).

Because the obtained p-value is greater than 0.05, we cannot reject the null hypothesis stating that our data is normal.

If the data is normal, then we check if variances in both groups being compared is also equivalent. One way to check that is using the F test, which is based on the variances ratio.

Again, a p-value of 0.09274 is not enough to reject the null hypothesis that tells us that variances are equivalent.

For a dose of 2 mg/day, the response in the guinea pigs does not depend on the delivery method.

Markdown is a formatting language where plain text documents are converted into rich text files with different formats (word, pdf and originally HTML). It can have code and figures embedded. It can be used to generate high quality reproducible reports but also simpler things such as README files, forum questions…

R Markdown not only allows saving code but also executing it directly in the file, which is a huge time saver. The document in which we work is in .Rmd format, which combines R code with markdown. When we knit the file, knitr transforms it into a classic markdown file (.md) by automatically writing the code and its output in the proper format. The finished pdf, word or HTML is then generated by pandoc. Do not worry, this is all done internally when clicking knit.

We need to install the rmarkdown package as follows

The formatting syntax is really easy to learn. You can take a look to the reference guide.

So far, we have only programmed very small chunks of code. Whenever you start using R for your projects it is recommended that you follow some good practice rules:

For computational efficiency of large scripts/functions, bare in mind: 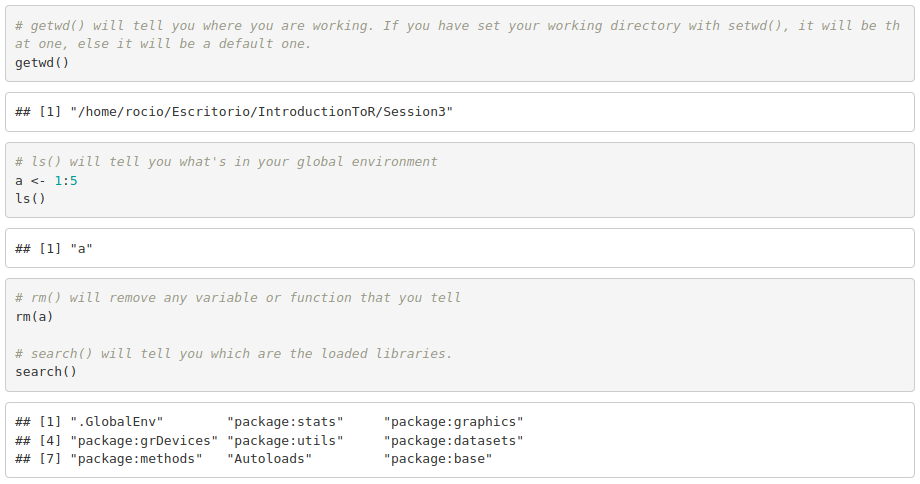