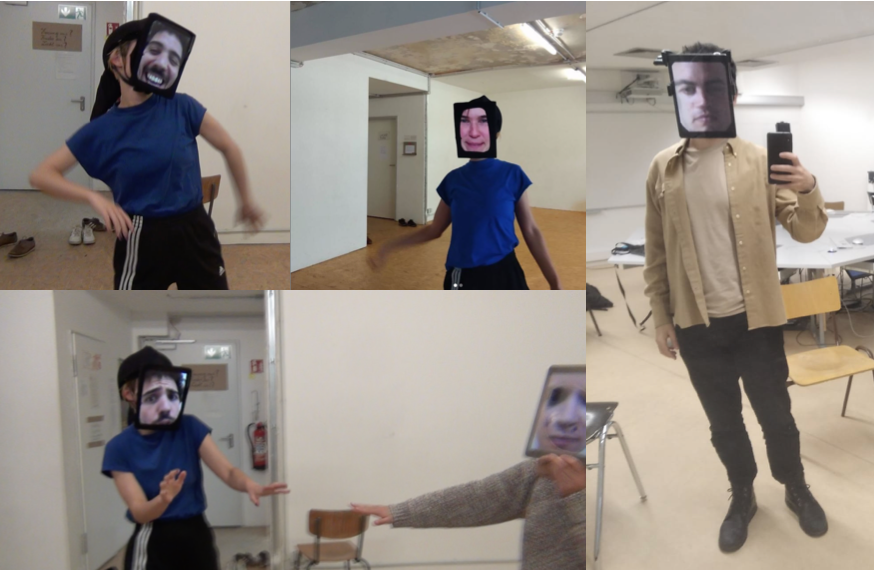 The four traditional singing voices: soprano, alto, tenor and bass have historically predefined identities linked to the operatic/choir singing tradition, and the vocal range of each human voice type. These identity tags concern gender, age, personality, and specific roles inside a story. In TRANSFER all those traditional associations and preconceptions of the human voice are subverted. Through video editing, CGI post production, face tracking and sound processing, the faces/voices of the five singers are modified in real time morphing between each other, disappearing, breaking, changing gender, or even transmuting into other parts of their bodies.

The system displays a virtual layer of prerecorded facial expressions, conversations, singing voice and electronic sounds on top of each singer's face. In this setup, and under the digital built neutral masks, the performers lose their facial features. Posture and body movement become the main expressive elements the singers can control live.
The first prototype consist of an iPad, a small portable speaker, and an earphone mounted into a plastic structure that the musicians attach to their heads with a rubber strap. Video playback on each tablet is synchronised via dedicated software. The stereo audio playback is splitted into two channels for tape and click-track.

"During my stay at Phonos I would like to work mostly on the audio part of the project. I am planning to record the voices of the different singers, edit them, and though the use of the MTG technology, creating voice avatars of the singers with which I could create interpolations between the contrasting sounding characteristics of their voices."

Currently, he is lecturing at HfMT in Hamburg, finishing his PhD in Composition, designing interactive sound systems for the SocSMCs project, funded by a Horizon 2020 grant from the European Union, at the Medical University of Hamburg (Department of Neuro- and Pathophysiology- UKE Hamburg), and working as a freelance composer and violinist.