During April and May 2022 Phonos hosted four international artists/composers in residency. They arrived as part of our ESPORA project, a pilot artist-in-residency call kindly supported by the I-Portunus Houses Mobility Programme, through which we intend to create connections with emerging European musicians and sound artists in their later formative stages, involved in doctoral research or postdoctoral experimentation in the intersection between music and technology.

Like the ESPORA project name suggests, these short artist-in-residency programmes intend to expand our area of action and influence, creating potentially germinating connections with international artists and leading educational and artistic institutions.

In this first edition, we collaborated with the Tangible Music Group at the University of the Arts in Linz (Austria), where Echo Ho and Jens Vetter are working on their artistic research projects. We also received Ted Moore and James Bradbury from the Music Technology department at the University of Huddersfield (UK). These four creative forces joined Phonos for two short residency periods, in which we organised seminars, workshops, inteviews and gatherings to complement their stay with us.

We received our first batch of artists between 1 and 9 April 2022. On April 1, we receive Beijing born, Cologne based artist Echo Ho, with whom we had the pleasure of socialising during the weekend in a number of cultural activities, including a fanzine fair at L’Automática, in the modernist district of Gràcia. Echo had the chance to interact with experimental artists from the local scene, as well as filling her bag with books and audio releases by independent local editors. One day later we received Jens Vetter, an electronic musician from Vienna who visited us to continue developing his tangible interfaces for blind people, a project partially developed during his PhD, that he has now incorporated into his performing gear-list. Both Echo and Jens are fellow researchers at the Tangible Music Lab from the University of the Arts in Linz. We have a long term philosophical relation with this research group, and so it seemed completely right to invite these two creative beings operating in the broad domain of “performing electronic music”.

Jens and Echo have very different approaches toward their own practices, which materialised in the way they organised their week. Echo Ho asked for technical support in order to develop parts of a new project, and so we organised a team of master-student experts to meet and assist her during her stay. Thanks to Pedro Ramoneda, Genís Platja, Nazif Can Tamer, and Xavier Lizarraga for their time and shared wisdom on applied Machine Learning! Echo spent most of her time working either alone or assisted in one of our smaller studios, developing small bits of artificial intelligence to integrate into her larger performative toolset. In parallel, Jens Vetter decided to spend his time at the Aranyó Hall. There, he integrated his interactive interfaces with our multichannel sound system, developing a new synthesis engine for his Tangible String, which he presented live in a concert on Friday 8th April, followed by a performance by Echo on her extended San Pedro Monochord.

Besides these purely creative activities, Echo and Jens offered a seminar on their artistic practices at University Pompeu Fabra, and enjoyed numerous conversations with local musicians and technologists, including Reactable's godfather Sergi Jordá. 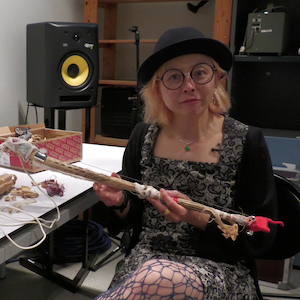 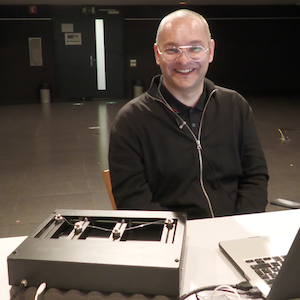 Echo Ho and Jens Vetter captured during their residency at Phonos.

On 13 May we received at our premises Australian creative coder James Bradbury, and Ted Moore, a composer/improviser from Chicago. Ted and James are part of the academic research group FluCoMa, centred at the University of Huddersfield in the UK, where they  develop creative coding tools for the techno-mediated musician and sound artist. Both guests took the chance to spend their residency period in Phonos to dive into the artistic potential of the FluCoMa tools in their own personal work, besides enjoying their time interacting with locals in a number of dissemination, cultural and social activities.

We met in the multicultural and technologically-driven neighbourhood of Poblenou, where Phonos is located inside the Pompeu Fabra University Campus, nearby other tech startups, cultural venues, digital libraries, and media companies. Over coffee and beers we had an initial conversation on their artistic interests and backgrounds, their current work, intentions, a bit of our trajectory, and we ended up organising the remaining of their period in Barcelona.

During their residency at Phonos, Ted and James shared spaces alternating their working hours between a small studio for computer-centred work, and the big Aranyó Hall, where our immersive multichannel sound system was prepared before their arrival.

During their stay, we organised a seminar where both composer-researchers presented themselves to an audience integrated mostly by Music-Tech university students and teachers, and local media artists. Out of this seminar, our two guests spontaneously offer to conduct an open workshop on the FluCoMa tools they develop. Other spontaneous activity was held during the week in Barcelona, and thanks to the interaction with other local musicians, we managed to put on an improvisation music gig where Ted Moore played together with local improvisers Ferran Fages (guitar), Clara Lai (piano) and Ángel Faraldo (electronics) in the Soda concert series.

As with the previous round of residencies, Ted and James were expected to open their residencies to the public. That happened on Friday 20th May, where an audience of 30 enthusiastic persons witnessed a double set of electronics ranging from acousmatic to noise to field recording making extensive use of the immersive sound system in the room. They kindly provided the pieces they developed during their stay to be part of the archive at our institution. 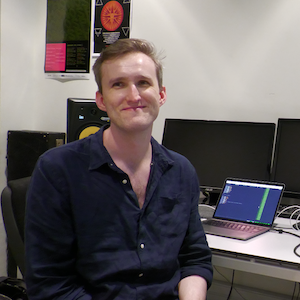 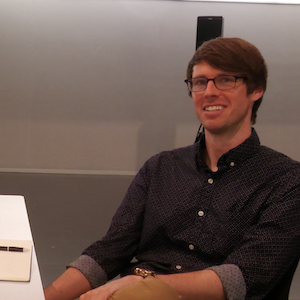 James Bradbury and Ted Moore photographed during their residency at Phonos.

The ESPORA residency programme was kindly supported by: