Within this area of research we aim at automatically generating “descriptors” that capture the sonological or musical features that are embedded in the audio signals. By combining signal-processing techniques with machine learning approaches we have obtained good results in analyzing some of the basic and most important musical facets, such as rhythm (Gouyon, 2005; Zapata et al., 2012), timbre (Herrera et al., 2003), tonality (Gómez, 2006; Martorell and Gómez, 2011), melody (Salamon and Gómez, 2012), or structure (Ong, 2007). Then from this type of descriptions and by bringing in other methodological approaches we have been able to get into topics that are more related to the semantic description of music, such as the concept of complexity (Streich, 2007), similarity (Bogdanov et al., 2009), music recommendation (Celma, 2009), genre (Guaus, 2009), mood (Laurier et al., 2009), social tags (Sordo, 2011) or song covers (Serrà et al., 2009). In order to approach the semantic aspect of sound and music we are also carrying out research on music cognition modeling (Purwins et al., 2008a; Purwins et al., 2008b) and we are interested on the use of MIR technologies in different music traditions, specially in flamenco music. 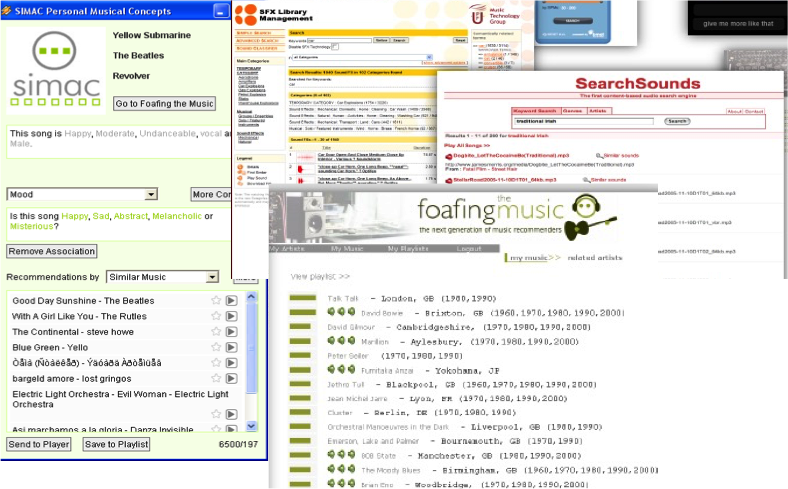 We have contributed to several MTG's technologies

Our team is also very active in the International Society of Music Information Retrieval (ISMIR) community. We have been involved in its scientific committee and we contribute to  ethnocomp (interest group on computational ethnomusicology), WiMIR (Women in MIR) and we moderate some community projects: Teaching MIR.