Audio Signal Separation addresses the problem of segregating certain signals from an audio mixture. Focusing on the separation of musical audio signals, we addressed this problem from different angles in the context of several public and industrial research projects. Listen to some demo sounds in DEMOS tab.

We investigate the separation of instrumental signals from orchestra recordings. In this task we can consider both blind and score-informed situations, as well as different type of mixture signals, from a stereo downmix to raw multi-microphone signals captured on a concert hall.

This research was conducted as part of a joint-research collaboration with Yamaha Corp. Japan (2009-2012).

In the scope of our research on audio Source eSeparation, we generated datasets that we release publicly in order to be used by other researchers.

For inquiries related to our research on audio signal separation please send an email to Jordi Janer (jordi . janer at upf . edu)

Blind separation of lead vocals from a polyphonic music mixture. High-latency algorithm performing pitch tracking with timbre models and the separation. Additional separation of residual (breathiness) components and fricative phonemes are added to increase the realism of the isolated vocals.

Source Separation can be used for various musical purposes in music applications beyond intrument isolation. We provide next two examples:

"Audioscanner" and "Advanced Audio Equalizer" are VST plugins that manually assist realtime musical audio signal separation in stereo recordings by using panning, phase alignment and other magnitude cues in a STFT scheme. Their theoretical background is described in the following article published at the AES 120th Convention (2006):

Matlab demo of the algorithm with fixed panning and phase difference ranges : matlab_demo.zip 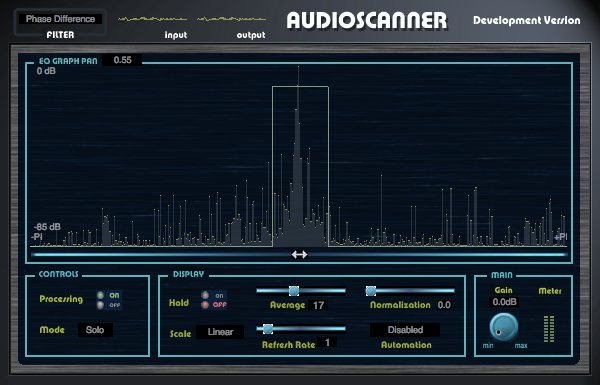 Louis Armstrong - What a Wonderful World

Louis Armstrong - What a Wonderful World(demo).mp3

In the first part, we listen to the original song.

Next two filters of the plugin are activated in order to separate the voice from the background. The first one filters by phase difference. The second one, filters the remaining sound by panning. The vocals seem to have been recorded with a mono microphone without adding artificial stereo reverb and they are panned to the center, so they share the same phase in both channels and the whole process leads to a fairly good separation.

The separated voice has a high quality. It sounds reverbered, but listening carefully to the mixture, we realize that the voice is already reverbered in the mixture. This reverberation was probably caused by the room where Louis Armstrong recorded the vocals using a mono mic. This is one example of the utility of this plugin to analyze recordings and learn details about the recording processes of your favorite songs, as well as focus on the personal interpretation of Louis Armstrong.

Finally, in the last part, we pursue voice removal. We switch to "mute" both filters and, we set to 0 the values of the region where the voice is present.

We copy the original song into two tracks.

In the first track, we activate two filters of the plugin to obtain the guitar. The first one filters by panning the zone where the guitar is located (left). Next a low-pass frequency filter is applied to remove the vocal residual noise. At this point we can listen only to the guitar. This is already a good result for a guitarrist who is trying to do musical analysis of the guitar, but we will go on and perform a remix of the song.

In the second track, we activate one filter of the plugin in "solo" mode selecting the complementary of the previously selected panning zone. Following this procedure, we are able to extract everything but the guitar.

This work was developed in the Music Technology Grop and partially supported by the SAME project.

This research is currently carried out at the Music Technology Group by Jordi Janer, Julio J. Carabías, and Marius Miron; with the former contributions by Ricard Marxer (2009-2013) and M. Vinyes (2005, 2008).

This research was supported by: