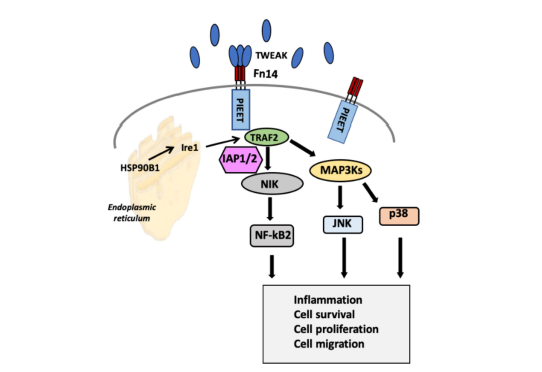 The tumour necrosis factor-like weak inducer of apoptosis (TWEAK) has been shown to be overexpressed in tumoral cells together with the fibroblast growth factor–inducible 14 (Fn14) receptor. The interaction between TWEAK and Fn14 triggers a set of intracellular pathways responsible for tumour cell invasion, migration, proliferation and angiogenesis. Both TWEAK and Fn14 show low expression in normal tissues but are highly expressed in many carcinomas and metastases, associated with a worse clinical outcome. In fact, the so called TWEAK-Fn14 axis is overexpressed in solid tumours, glioma, lung cancer, melanoma, and squamous cell carcinomas. Additionally, Fn14 is highly expressed in the metastases of breast, colorectal, melanoma, non-small cell lung, and prostate cancer and reported to play a role in muscle wasting and cachexia, as well as in chronic human inflammatory pathologies such as neurodegenerative, autoimmune, or malignant diseases. In this context, the modulation of the TWEAK-Fn14 interaction is an important therapeutic goal, especially as a potential tool to prevent brain metastasis, since TWEAK has been found overexpressed in the invasive front of these metastasis lesions from breast cancer patients.

The technology consists on a first account of the development of 4 synthetic small peptides able to target extracellular TWEAK-Fn14 interaction and trigger an intracellular response, as shown on the decrease of expression of downstream effectors. A large set of peptides was designed using a structure-based computational approach, starting from the 3D structure of TWEAK bound to a neutralizing antibody. From this analysis, 50 peptides were moved forward to experimental validation, including a first stage cell-based set of assays and an in vitro confirmation of positive hits using surface plasmon resonance (SPR). The selected peptides were tested in both TWEAK-dependent brain metastatic (BRV5) and TWEAK-independent parental breast cancer cells (435-P), and the level of expression of nine selected genes from TWEAK-Fn14 signalling pathway was assessed using specifically designed microarrays, showing that four peptides induced down regulation of probe genes. These four peptides and two negative hits were selected to measure in vitro binding to TWEAK in a biophysical assay using SPR.

The peptides identified are able to modulate the interaction between TWEAK and Fn14.

The peptides can cross the BBB through systemic circulation and with nanoparticles, and have an effect in the brain.

Currently, there is an in silico model, and the efficacy of the peptides has been tested in vitro, showing inhibition of the receptor activation. The specific binding of the ligands to TWEAK has been successfully proven in a biophysical. Additional pre-clinical research efforts are still needed in that direction, with our results within this context being just an initial steppingstone for further therapeutic developments.

An EU patent application has been filed in October 2020.

The modulation TWEAK-Fn14 interaction constitutes an important therapeutic target. Fn14 is a brain metastasis biomarker predictor (the likelihood to develop brain metastasis in Fn14-positive luminal breast carcinomas increased 36.70-fold). Moreover, Fn14 is implicated in the aggressiveness of non-small cell lung cancer cells, the source of most brain metastasis cancer. Although TWEAK- or Fn14-targeting agents (used to inhibit the progression of tumours) are currently under development (i.e. a humanized antibody anti-TWEAK receptor currently in clinical Phase 1 in solid tumours), the targeting of protein-protein interactions by external agents remains a substantial challenge and currently there are no efficient drugs or non-invasive therapy to treat this type of tumour. The conventional treatment consists on radiotherapy and surgery, since the tumour localization (brain) hinders the arrival of drugs due to the presence of the brain blood barrier (BBB).