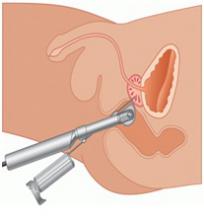 When prostate biopsies are taken through the rectum – which is by far the most common procedure – infection may occur as bacteria normally safely confined within the rectum are pushed into the prostate. Currently this risk is managed by hygienic measures such as enemas and by the administration of antibiotics. Nevertheless, even after applying these prophylactic measures, this complication results in a significant number of severe rehospitalizations. Clinically relevant infections are caused in about from 1% or 5% of the patients going through the procedure. Although very rarely these infections result in mortality, they have a major impact in the morbidity that results from transrectal prostate biopsy.

It is necessary to provide an alternative to prior art offering a more efficient and realistic solution for application in human tissues in vivo. To prevent such infections, it is proposed an electrochemical system which disinfects the biopsy needle once penetration has occurred and which creates a toxic environment for posterior bacterial colonization so that these cannot cause further infections by migration. The technology is based on applying an electrical current to the needle which, besides causing sterilizing pH changes, produces a massive release of antibacterial metal ions and, in particular, silver ions.

Computer simulations have been carried out to initially test the feasibility of the method and in vitro tests have been done which support the efficiency of the system for achieving in situ sterilization and for the formation of long-lasting antibacterial environment. We are preparing the clinical validation studies.

A PCT patent application covering the device was filed in October 2013. This technology is a development of a prior patented technology for preventing the needle track seeding during biopsies discovered by the same research group.

The potential market for this invention would be the prostate biopsy devices. It is estimated that about two million prostate biopsies are performed in Europe and the United States every year. The Cancer Research UK estimates for the age-standardized incidence rate of men with prostate cancer increases from around 97 per 100,000 in 2007 to almost 105 per 100,000 in 2030, an increase of 8%.