Researchers Christos Zografos (UPF) and Diego Andreucci (ISS) have co-authored an academic paper published in the journal Political Geography arguing that understanding the racist/colonial character of climate policies has important implications for thinking about emancipatory and climate-just transformations.

Title: “Between improvement and sacrifice: Othering and the (bio)political ecology of climate change”

In this article, we argue that othering is central to the government of climate change. Critically engaging with Foucault’s ideas on biopolitics and racism, we elaborate a conceptual perspective for analysing how such a “technology of government” operates. We review diverse literatures from geography, political ecology, critical adaptation studies and the environmental humanities dealing with discursive constructions of the other in three exemplary areas of intervention—mitigation (particularly “green” mineral extraction for renewable energy production); constructions of “vulnerability” in adaptation policies; and the governing of “climate migrants”. We contend that these interventions largely work through the extension of capitalist relations, underpinned by racist and colonial ways of seeing populations and territories as “in need of improvement”. And that, by legitimising and depoliticizing such interventions, and by suspending responsibility for their unwanted or even deadly impacts, othering helps to preserve existing relations of racial, patriarchal and class domination in the face of climate-induced social upheavals. Othering, we conclude, is not only a feature of fossil fuelled development, but a way of functioning of capitalist governmentality more broadly—which has important implications for thinking about emancipatory and climate-just transformations.

They have also published a blog article based on this paper titled “On the Racist Humanism of Climate Action” in Undisciplined Environments. 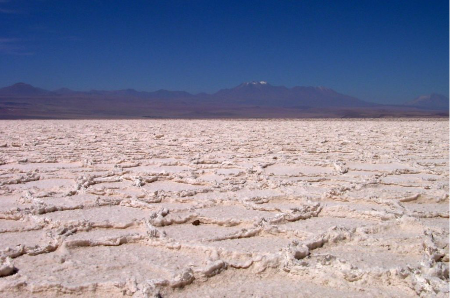 Featured image: The Atacama salt-flats in Chile are a hotspot of lithium extraction, a major source of conflicts with local indigenous communities over access to water.