Recognizing the particular risks and vulnerabilities of large world cities, the PPC and partners joined forces to design Climate Healthy Cities (CHC), a climate change and health knowledge initiative, modeled on other climate adaptation-focused networks for cities such as the "Cool Cities" and "Delta Cities" networks of the C40 Cities Leadership Group.

CHC aims to help city public health and health care systems sustainably reduce the effects on wellbeing of climate change. It does this by sharing a database of tools and resources on health-related climate adaptation and vulnerability mapping with cities; connecting cities with common climate challenges to easily and quickly share health-related knowledge and experience and linking cities to state-of-the art applied research on climate-related health policies and strategies.

The PPC, which serves as Secretariat of CHC, initiated a survey and diagnosis of climate-related health vulnerabilities and capacities in large world cities with the goal of developing a Climate-Healthy Cities typology and index. A review of promising adaptive approaches, such as expansion of early warning systems, is also underway. Once operational, CHC aims over a four-year period to attract 50-60 cities to the network, help ensure that these cities integrate health into their climate adaptation plans, and build a vibrant exchange of learning across cities with similar needs and interests.

Several seminars occurred during 2015 and 2016 on climate-related subjects. On October 2 2016, in order to explore how climate change may impact public health, and to discuss ways to stabilize the climate and to minimize damage from climate change a Climate and Change and Health Summit took place in Baltimore. On January 21st, a day-long series of events took place with Congressman Henry A. Waxman took place on January 21 in Baltimore. A morning session included Baltimore City Representatives and the Climate Change Work Group members from Barcelona and Baltimore in a discussion that explored areas of mutual interest to the two cities. An afternoon public seminar entitled "The Paris Agreement on Climate Change: Public Health in the Balance" then followed, with guest Todd Stern, Special Envoy for Climate Change at the U.S. State Department, among the panelists. Finally, the day concluded with the webcast "The Clean Air Act as Model Policy: A Conversation with Henry A. Waxman." 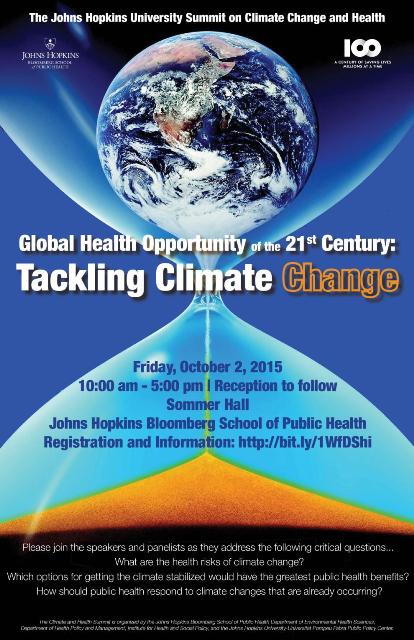 Click here to watch a short video on the plan for a Climate-Healthy Cities Network, perspectives from PPC partner institutions, and confirmation of the high priority for the PPC.