場所, χώρα, Einrämen. Conceptualizing the place of the coincidentia oppositorum

On The Relation between Contraries: A Spatial Approach

On Chiasmatic Chorology: Can It Help Us Locate the Missing Basho?

Spaces of the Spirit, Spirit of Places: Air, Space and Coincidentia Oppositorum by Watsuji and Schmitz

Language as the Open-Bounded: Heidegger and Ueda at the Limits of Language

Looking beyond. Metaphors of Spatialization between Physics and Metaphysics

On The Relation between Contraries: A Spatial Approach

The strong impression “that they all in one way or another identify the contraries with the principles” (Aristoteles, Phys. I, 5, 188a) seems to be an unavoidable pattern of thinking and doesn´t leave room for any further option among the exclusive oppositions in this pair.

Taking my departure from this assumption that crosses the whole history of philosophy, my intention is to analyze the relation between contraries up to its ultimate form as a relation between contradictories. In particular, I will show how a spatial approach provides a breeding ground for an enquiry into dichotomy in order to return the actual complexity of the opposite´s reciprocity and, as a result, build a broader concept of relationality.

My investigation will be based firstly on Nicholas of Cusa´s theory of coincidentia oppositorum. Following his formulation of coincidence I will try to puzzle out the logic of duality after the example of several opposite pairs. The essential relatedness of the opposites represents both, a kind of reduction of the composite frame of their relation, but at the same time leads firmly to the fruition of a more complex theory of relationality as located betweenness.

Focusing attention on the scene of this encounter, our gaze will discover a whole field as the gathering place of opposites, a field which introduced them into an intricate web of placed relations. The contradictory encounter/conflict of opposite dualities embodies, indeed, a situated interception, one which doesn’t take place punctually on a clear and decisive line. This interception not only has room, but more deeply needs room, to be conceptualized: it opens the leeway wherein a dichotomous relation is not sufficient to describe the breadth of their relationality.

In concluding my inquiry on the possibilities of a spatial relationality, I will briefly draft some fundamental traits that belong to it with the support of certain pictures that have appeared in the history of philosophy in different spaces and times: among them are the platonical chōra (χώρα), the nishidian basho (場所) and the heideggerian act of Einräumen. The now opened field of relationality makes room available to structure otherness and difference, which enables us to widen our usual dualistic frame of thinking through a radical spatial approach.

On Chiasmatic Chorology: Can It Help Us Locate the Missing Basho?

This presentation will focus on the contemporary philosophical development of Nishida’s logic of basho and further discuss whether or not this conceptual advancement (which has supposedly crystalized the core principle of the very logic) overcomes the limitations that the historical Nishida failed to address in his works.

As an example of this contemporary development, I will refer to John Krummel’s notion of “chiasmatic chorology.” In the process of establishing Nishida as a thinker in his own right, Krummel successfully demonstrates how Nishida’s articulation of reality, our experience of it, and their relation to each other in terms of chora indeed bypasses the problems that we could recognize in Hegel’s dialectical logic of the self-determining concept or Mahayana logic of non-duality. Nishida’s logic, in other words, remains attentive to the open chasma in the communicative relation between world and self or what we define as coincidentia oppositorum in this conference.

Regardless of the fact that the notion of basho puts Nishida at an apex of the history of eastern and western philosophy in the first half of the last century, his writings suffer from a certain limitation of nationalistic thinking, thereby failing to live up to the concrete idealism that his logic advocates. To extract the philosophical structure of Nishida’s thinking and also to properly place it in todays’ global context, therefore, Krummel argues that we need to elaborate on what is at work in Nishida’s logic of basho as a charismatic chorology and also that this metaphysical framework derived from Nishida’s philosophy can serve as a viable option for the study of ourselves and the world.

To examine the legitimacy of chiasmatic chorology as an advancement of Nishida’s logic of place, I would like to set forth a question raised by a trailblazer of contemporary Nishida scholarship, Jim Heisig. In his article, An Inquiry into the Good and Nishida’s Missing Basho,” Heisig argues that

“[if] the intelligible-historical world [is] the foundation of our natural environment [in Nishida’s philosophy], the ultimate basho of our experience beyond which lies the religious realm of nothingness is to support at a primary level the very subjugation of the natural world….”

As Heisig points out here, there is the flaw in the logic of basho that is far more serious than the socio-political narrative that the chiasmatic chorology has diagnosed as a cause of nationalistic dictum in Nishida’s texts. However, is this really the case? Or can contemporary chorology unfold itself as a cure for the metaphysical one-sidedness that Heisig detects in the early work of Nishida? How much of this problem remains throughout the emergence of Nishida’s logic? Does chiasmatic chorology mark Krummel’s original contribution to the history of philosophy or does it remain a mere linguistic recalibration of what Nishida had presented in his metaphysics?

It is impossible to systematically answer all of these questions in one setting. But I would like to keep them in mind during our inquiry into the significance of Krummel’s (re-)appropriation of Nishida’s basho.

In Watsuji’s work we find a novel understanding of the self, one in which spatiality belongs to the very structure of subjectivity. Through this space, the self is able to be continuous with both nature and other selves. Moreover, Watsuji approaches the relational space that constitutively links self and other, and both of these with nature, through the dyadic structure of Dasein and world laid down by Heidegger. In this transformative appropriation of Heidegger’s concept of being-in-the-world, Watsuji revises and expands this structure at each of its poles. At the pole of Dasein, he proposes a more phenomenologically accurate conception of the self as constituted by its relations to others, which he calls aidagara 間柄, or being-in-relation-to-others. The self that is so constituted is surprisingly strange: in certain modes of consciousness and interaction, it is able to overlap with, extend into, and be continuous with others who extend into and are continuous with it. At the other pole of this dyad, Watsuji incorporates the region of nature that corresponds to, and is co-extensive with, a world. The self is immersed in, incorporates, gives cultural expression to, and is continuous with, this dimension of nature, which he calls a fūdo 風土.

In this talk I show how Watsuji establishes intersubjective spatiality as part of the very structure of the self through his critique of Heidegger’s notion of Dasein. I then look at the problem of how the second dimension of constitutive spatiality, namely, the space and place of nature, allows for the possibility that in the concept of fūdo, the subjectivity of the self is simply swallowed up by the objectivity of nature. I maintain that the capacity of the self to transcend its fūdo issues from Watsuji’s understanding of spatiality as united to temporality, one that is manifested in the phenomenon of human historicity. Watsuji comes to this conception of spatio-temporal unity, moreover, through a critical transformation of the notions of spatiality and temporality in Being and Time.

Spaces of the spirit, spirit of the space. Atmosphere, negative phenomena and coincidentia oppositorum through Watsuji and Schmitz

How is the divine related to space? Is it possible that thinking the two through such a practical connection we can redefine our comprehension of both? I would like to discuss this theme with the help of two unorthodox phenomenologists Watsuji Tetsurō and Hermann Schmitz.

Greek and European thought has mostly dealt with space and divinity in terms of being, through positive determinations. The biblical God has been characterized as a supreme ens, and his omnipresence expressed as a mostly abstract ontological quality. Space, due to the strong European stress on internal consciousness and temporality, also as locus for the encounter with the divine (from Augustine to Heidegger), has been seen as a form of exteriority, and eventually stripped by post-Cartesian views of materiality of his qualitative and expressive characters. Chora and coincidentia oppositorum are therefore counter-canonical concepts, which seem to offer a relational and negative approach to both space and divinity from inside the very tradition that mostly treated them in terms of substantiality and formal determinations. Can they be joined in a spatial reflection of the divine?

If we think the problem of contradiction and relation as a bridge to connect space and divine, however, we realize that a phenomenological reading of spatiality necessarily includes relation and contradiction as conditions of an opening: is the case of Watsuji Tetsurō’s notion of “wind and earth” (fūdo), or the recognition of chora as pre-thetic spatiality (Julia Kristeva). The divine, too, can be through a reappraisal of human disclosure not a positive and determined being, but a “personal-impersonal atmosphere”, that through corporeal spatiality affirms itself in human existence – this is the argument of Schmitz in his System der Philosophie. The rigorous reinchantment of the space-body nexus suggested by these authors is the key to comprehend both space and Göttliche as a literal “spiritual” fold of experience, shaping our being with others and being in the world.

Language as the Open-Bounded: Heidegger and Ueda at the Limits of Language

By comparatively reviewing Heidegger’s interpretation of Stefan George’s poem The Word and Ueda’s analysis of a poem titled “Evening Glow”, I will deal with two issues: 1) How a limit experience of language emerges via the interplay between the appearance and the disappearance of the wor(l)d. 2) How the word itself transpires from stillness, both situating us in the world while displacing us from it. In merely signifying things, the word fails in becoming manifest as the word. In becoming manifest as the word, it is no longer capable of signifying the thing. In that regard, language appears both as the limit and the clearing of human existence.

By concentrating on the notion of place as topos as the “open-bounded”, it is possible to make better sense of Heidegger and Ueda’s understanding of language. Comparing Heidegger and Ueda from a topological standpoint will bring into view what follows: 1) Language, as topos, situates us as mortals in our finite world, while opening up our understanding of the world beyond the limits of factual-everydayness. 2) The two main characteristics of language, i.e., openness and boundedness, are also the main characteristics of place as topos.

Looking Beyond. Metaphors of Spatialization between Physics and Metaphysics

After a brief recall of some historical perspectives on the notions of “space” and “place” among ancient and modern philosophers, in order to underline the main threads of philosophical speculation about those notions, I will try to deal in a closer way with the possibility of a crossover or interaction between some hints in different philosophies, East and West (from Chinese classical thought to Heidegger, from Nicholaus Cusanus to Nishida). Taking into account concepts such as chora, basho, or Ort, I will discuss the metaphorical dimension of seeing and vision, in order to stress the “spatialization” of time, on one hand; and, on the other hand, in order to point out the role of the body in the structure of spatialization of subjectivity, in the complexio oppositorum of space and time, place and duration, I and Other. 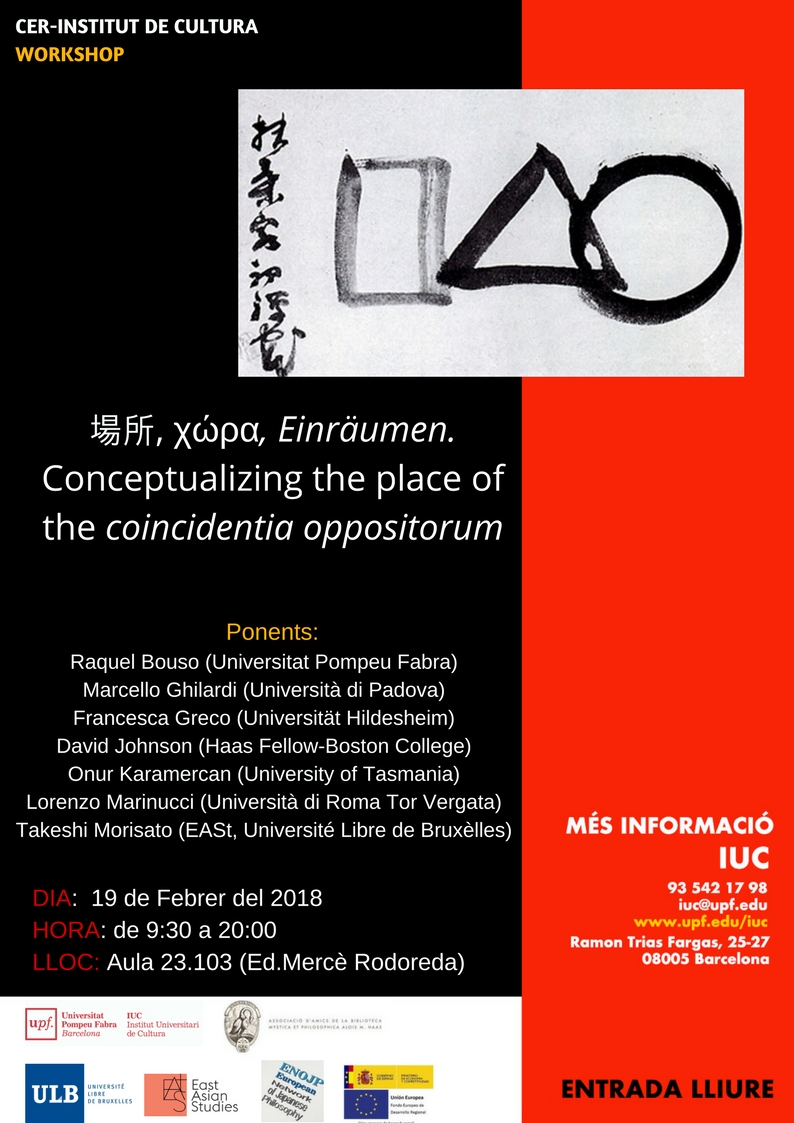