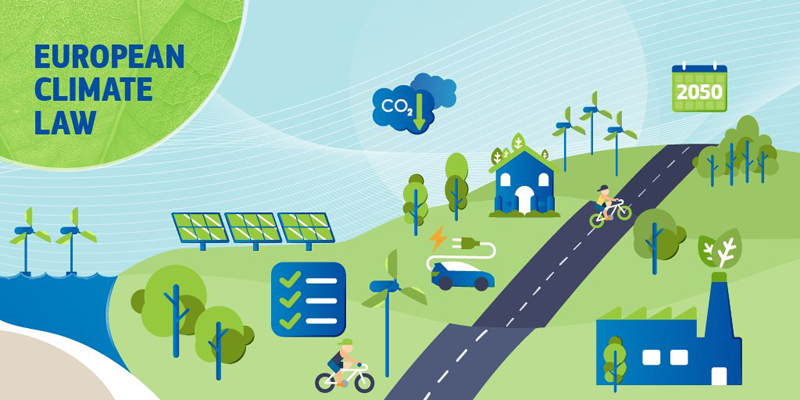 On December 11th 2019, the European Commission presented the European Green Deal. This initiative aims at making Europe the first climate-neutral continent by 2050 while also creating an inclusive economy, improving people's health and quality of life, and taking care of the environment. Another objective is to transition towards a resource-efficient economy where growth is not dependent on the use of resources.

What does it do?

The European Green Deal is structured as a set of milestones to tackle climate change in all sectors of the economy, but making emphasis on transport, industry and agriculture. First, it envisions the creation of an European Climate Law to achieve the 2050 climate neutrality objective. Other inputs such as the Biodiversity Strategy 2030 or the Farm to Fork Strategy seek to complement the previous action. Second, the EC presented the Sustainable Europe Investment Plan (2020) to help meet current climate and energy targets in financing needs of at least €260 billion (1.5% GDP 2018). Likewise, the Just Transition Mechanism will support both regions and individuals more exposed to decarbonization and more likely to experience difficulties from the transition towards a new Green economy. Last but not least, the Commission launched a Climate Pact (2020) to confer European citizens a voice in the debate, while ensuring that there is a global response against climate change in international organizations and diplomacy.

Back in 1973, the European Commission introduced the first environmental program in order to tackle rising pollution levels, to protect urban and natural environments and to promote awareness of ecological problems. The involvement of the EU experienced another boost with the introduction of health, natural resources and the environment as areas of concern in the Single European Act (1987). As a result, the European Environment Agency was set up in 1990.