Two members of CRITICC attended the 5th European Conference for Critical Animal Studies, organised by the EACAS. The conference was celebrated in the University of Lund, Sweden, from the 25th to the 28th of October 2017.

The topic of the conference was "Nonhuman animals in society: Exploring new pathways for resistance, change and accomodation".

Núria Almiron, member of CRITICC and co-director of CAE, presented the paper "Is appealing to climate change and the environment an effective advocacy strategy to reduce oppression of nonhuman animals? A discussion on evidences and arguments". In her talk, Almiron discussed the most relevant experimental evidences addressing behavioural change and vegetarianism or veganism and then elaborated on the environmental message to identify what were the weak and strong points of using this frame as a pragmatic approach towards the abolition of animal exploitation. 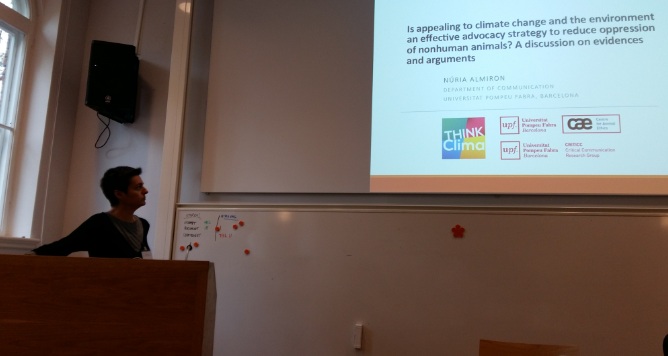 Laura Fernández, PhD Researcher of CRITICC and new research assistant at CAE, presented "Images that liberate. Strategic visual communication of farmed animals' exploitation. A study of animal liberation activists in Spain". She introduced the findings from her final master thesis research about the effectiveness of visuals related with the use and exploitation of farmed animals from the experience of animal liberation’ activists in Spain. She showed what kind of images of farmed animals had the greatest impact on the studied activists and pushed them to become vegans and animal liberation activists and also what type of images became more used by them to influence their social circles and potential audiences of their activism. 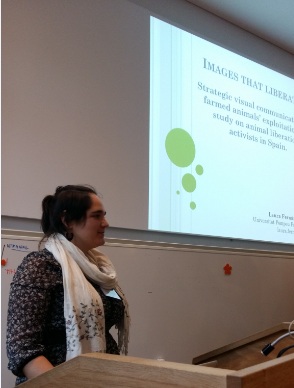