The Fifth Cataract Project
This project explores the area of the Fifth Cataract in Sudan with the aim to understand and reconstruct population dynamics over time, past land use and human adaptation to climatic- and environmental changes. This will be achieved through a... 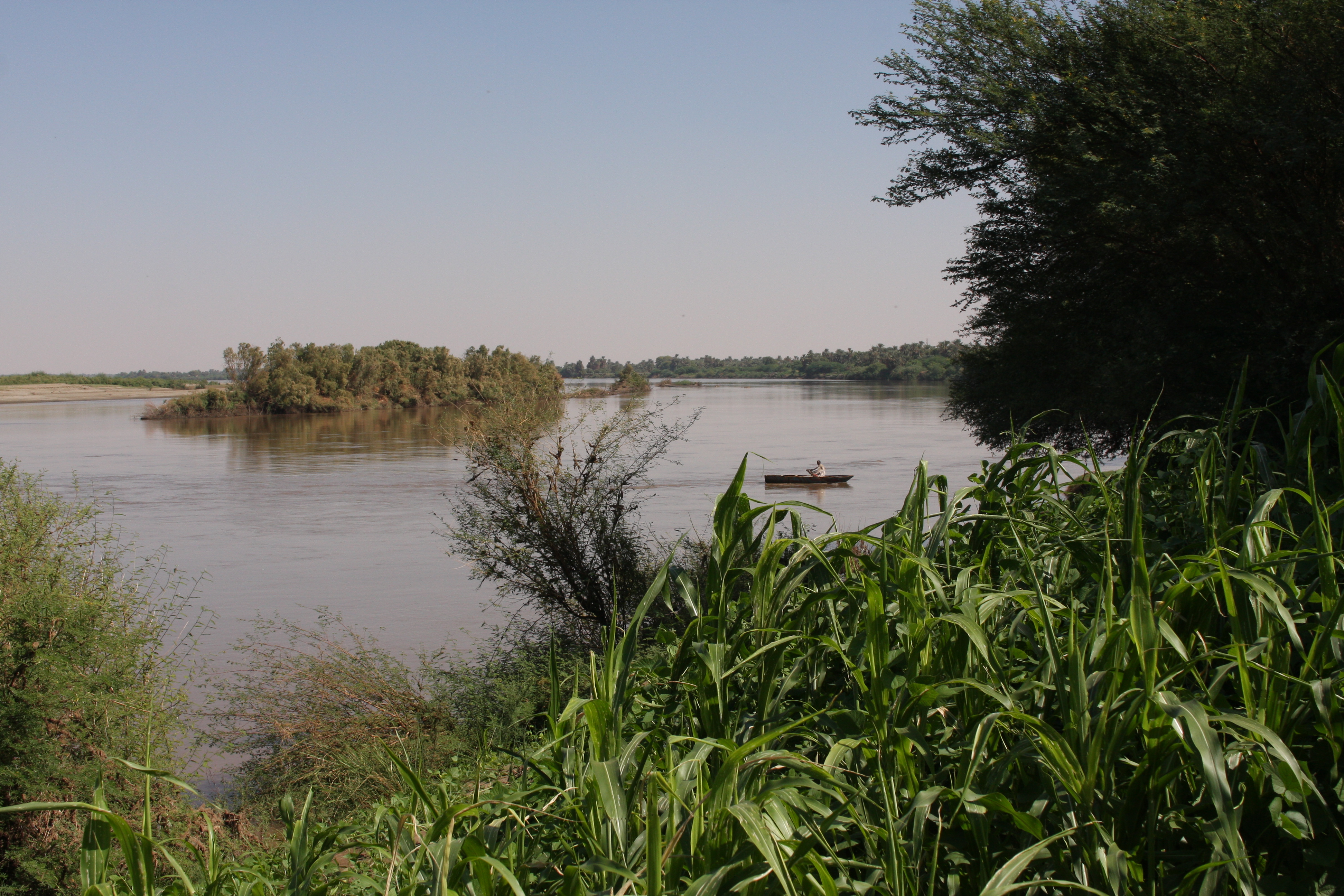 Prehistoric archaeological research in Sudan has had a long period of intense activity since the pioneering work by Anthony Arkell at the Khartoum Hospital site in the 1940s (Arkell 1949) and prehistoric sites are known both along the Nile Valley as well as in adjacent desert areas. The evidence is, however, still patchy and very much depending on the intensity of research (Usai 2016). One region relatively untouched by prehistoric research is the area of the Fifth Nile Cataract (figure 1). After first sporadic archaeological investigations in the 20th century, it was only during the last two decades that more intense research has started in this area (Osman et al 2003; Drzewiecki and Stepnik 2012, 2014; Welsby 2013; Jesse et al 2013; Alkhidir 2018, 2019). At present, the general understanding of Mesolithic/Neolithic development and dynamics (including its chronology and the diagnostic material typology) comes from central and northern Sudan, the area in between still lacking research. Conducting research in the Fifth Cataract area will make a link between these two important areas of Sudan Prehistory. 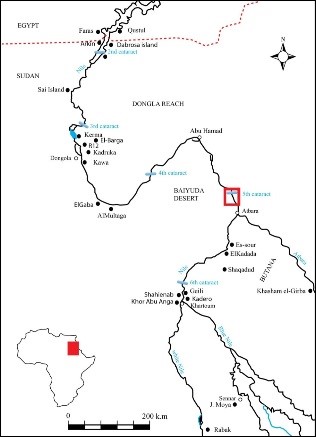 On the other hand, the lack of stratified sites and comparison study between the Nile and the desert in the Middle Nile region make this research important. It is generally understood that the Nile Valley, was the focus of past human activity where the river created a favourable occupation environment, providing the source of water and soil nutrient to cultivate crops and raise animals. This is mainly based on the assumption that in areas far from the river, neither cultivation nor animal husbandry was possible, due to the environmental conditions. Indeed, agriculture in arid areas is often considered not viable far from permanent water sources, such as rivers or lakes. However, recent research has provided evidence of modern agricultural systems as far as 40 km from the Nile River and relying exclusively on the scarce precipitations (Lancelotti et al. 2019). Thus, it has highlighted the possible underestimated importance of sites located far from the Nile banks. In this respect, the research carried out by the Fifth Cataract Project, will dedicate particular attention to the sites located in the desert and will try to unravel the role that these settlements had in the population dynamics of the area. In particular, we will explore the relationships between occupation dynamics and climate. Recent paleoclimatic studies have highlighted the role of climatic oscillations in shaping the cultural dynamics in the Nile Valley and the whole of North Africa (e.g., Kuper and Kroepelin 2006). Especially in the last 10k years, shifts between arid and humid conditions, impacted prehistoric and historical societies that adopted different strategies to cope with environmental changes (Manning and Timpson 2014).

It is still unclear, however, how local conditions impacted on the human population in the area of the Fifth Cataract and whether climate change had any influence on occupation/migration of people in this area. Indeed, an interesting aspect of the prehistory of Sudan, is the apparent gap in anthropic occupation that occurs between the end of the Neolithic period and the beginning of the Kushite period, which lasts about 1,000 years (Clark 1984; Sadig 2010). This led to several suggestions, which included gaps in research, or possible events of populations migration to other places because of unknown circumstances (Caneva & Santucci 2006). We intend to address this problem by studying this period through different methods, with particular attention to climatic and environmental transformations, in the area of ​​the Fifth Nile Cataract, which shows significant research potential. Through this work we can recognize the main features of Late prehistory in the Fifth Cataract area and the role of the landscape in the human movement and stability, which could help to answer some of the questions that still remain in prehistoric research.

The overall objective of the project is to reconstruct past occupation dynamics, adaptation to climatic and environmental changes and variation in land use through time in the area of the Fifth Cataract in late prehistory.

In order to reach this objective, a series of investigations is necessary so as to fill the gaps in our knowledge of the area and connect the local, with more general dynamics. First of all, it is paramount to collect paleoenvironmental data and produce reliable, local paleoenvironmental sequences so to understand how possible changes affect the population dynamics. In particular, it is necessary to understand the link, if any, between population dynamics and climatic fluctuations. At the same time, it is important to understand the co-evolutionary dynamics of human occupation and environmental change, and especially the role of anthropogenic changes in the environment. This will be achieved by the analysis of environmental proxies (e.g. botanical, faunal and malacological remains) both off-site as well as in the archaeological record. The analysis of these proxies will also offer insights on the economy of local population, their strategies of resource exploitation and use, as well as any impact that human activities might have had on the natural resources of the area. At the same time, they will allow the reconstruction of local land use strategies and how these have changed through time to adapt to internal and external perturbations.

In order to achieve a fine detail in the reconstruction of human occupation dynamics, it is necessary to have a clear and secure understanding of the chronology of the occupations. In this respect the project will place particular care into the recovery and analyses of secure datable material, giving preference, when possible, to the dating of short-lived specimens, such as grains. At the same time, the project will employ the state-of-the-art techniques for the reconstruction of food procurement and production, such as the stable isotopic analysis of plant remains for the precise identification of agricultural practices, and of animal remains for the reconstruction of animal husbandry practices and eventual mobility strategies.

We strongly believe in the value of local knowledge, especially related to the ecology and the potential of natural resources of the areas considered in our studies. Thus, we will put special emphasis on the ethnoarchaeological aspects of the project by integrating in our research a careful program of recording of Traditional Ecological Knowledge (TEK). TEK is particularly useful when investigating land use and agricultural (plant and animal) practices. Indeed, traditional agricultural practices are the result of long-term adaptation processes (Altieri and Nicholls 2017) mainly determined by the combined effect of plant growth rhythms and the surrounding environment (Lasco et al. 2016). This approach can be framework within the discipline of ethnoarchaeology, whereby the present is used as a frame of reference to build hypotheses on past events. Far from linking directly present and past human behaviour, ethnoarchaeology offers the links between something observable and the rests that the observable activity leaves behind. In this respect, the project will also provide a frame of reference for human activities by sampling traditional activity areas, especially those related to food production and consumption, and animal husbandry, and analysing the plants and chemical proxies left on the ground by these activities (Lancelotti et al.  2017).

The main objective of this first campaign will be to carry out a systematic survey of the research area (see map in figure 1) in order to catalogue and map the archaeological evidence. In this first phase all the evidence will be considered, independently on their chronological attribution, which will be based on surface material collection, or their typology. Particular attention will be placed in connecting the archaeological occupations with their landscape, understanding the geomorphology, vegetation and hydrology of the area. This preliminary work will help gauge the distribution of sites and phases of occupation in this area, thereby giving a first preliminary indication of the demography and occupation in this area.

This survey will be fundamental in order to choose sites for further investigation, in following campaigns. In order to fully evaluate the potential of a site for future excavation, we will conduct small test-trenches at some selected locations. The locations will be chosen on the basis of published data (if available) and on the basis of the results of the survey. These small test-trench will be carried out to recover archaeological material, especially chronological indicators, as well as bio-archaeological remains. The latters will be used for radiocarbon dating so to have absolute chronology, as well as for bioarchaeological analyses to appraise plant and animal resource consumption.

While conducting the surveys, we will also carry out ethnographic interviews with the local population, aimed at understanding actual and historical land use, especially related to plant and animal resources, climate-change perception and the evolution of agricultural activities in the area. During this part of the survey, we will concentrate in understanding what indicators of past land use we can derivate from Local Traditional Knowledge, that can be found in the archaeological record as well. At the same time, we will use these occasions for interactions to talk to local communities about their heritage, both material and intangible, and to build the basis for a stable outreach program.

Sadig, M. A. 2010. The Neolithic of the Middle Nile Region, An Archaeology of central Sudan and Nubia. Kampala.