Laura Fernández, member of the CAE board, presented on the panel #VIS02 - "Seascapes, violence and subaltern others” (from the Visual Cultures section) at the 8th European Communication Conference: Communication and Trust by the ECREA (European Communication Research and Education Association), on September 9th, 2021. The paper summarized the results of her PhD research on moral shock and strategic visual communication within animal liberation activism.

This paper presents the main results of doctoral research on strategic visual communication within the animal liberation movement. In empirically exploring the concept of moral shock (Jasper & Poulsen, 1995), it argues that certain emotional impacts created by images can moralise attitudes (Wisneski & Skitka, 2017). Moral shock has been a persuasive strategy of the animal liberation movement since its beginnings that has caught the attention and interest of people with no prior political interest (Jasper & Nelkin, 2007). Strategic visual communications and the use of violent images inside social justice movements has been an important area of research within the field of Critical Animal and Media Studies (see, for example, Jenni, 2005; Freeman, 2009; and Almiron, Cole & Freeman, 2016).

The main goal of the research was to consider the effectiveness of different images in 1) promoting change in speciesist attitudes (the adoption of veganism), 2) promoting action against speciesism (involvement in activism) and 3) sustaining both veganism and activism in the long term. A second goal was to examine the activists’ use of visual materials to promote non-speciesism and particularly their use of violent images and the moral shock strategy. Finally, the third goal was to confirm the author’s classification of violent images of farmed exploited animals.

For the first two goals, the methodology of the study consisted of in-depth interviews with 60 vegan animal liberation activists from three countries – Spain, Sweden and Denmark. Data was recorded, transcribed and analysed with qualitative data analysis software (NVivo) in order to obtain the indicators that helped answer the research questions. For the third goal, the analysis of the interviews was complemented by a quantitative assessment on a 1 to 10 Likert-type scale of the violence of each image in a total of 10 images of farmed animals.

The results will provide information about the emotions provoked by the exposure to images of farmed exploited animals, and the correlation of this exposure with the adoption of vegetarianism, veganism and/or becoming involved in animal liberation activism, thus confirming or rejecting the moralizing effects of moral shocks. These results will include a reference list of existing visual materials that affected activists and other materials used by activists to promote animal liberation. Finally, an agreed categorisation of the levels of visual violence of farmed exploited animals will be presented.

In short, this research contributes to the important discussions around the dilemmas of the strategy and the ethics of violent images, as well as their effects, risks and potentials. 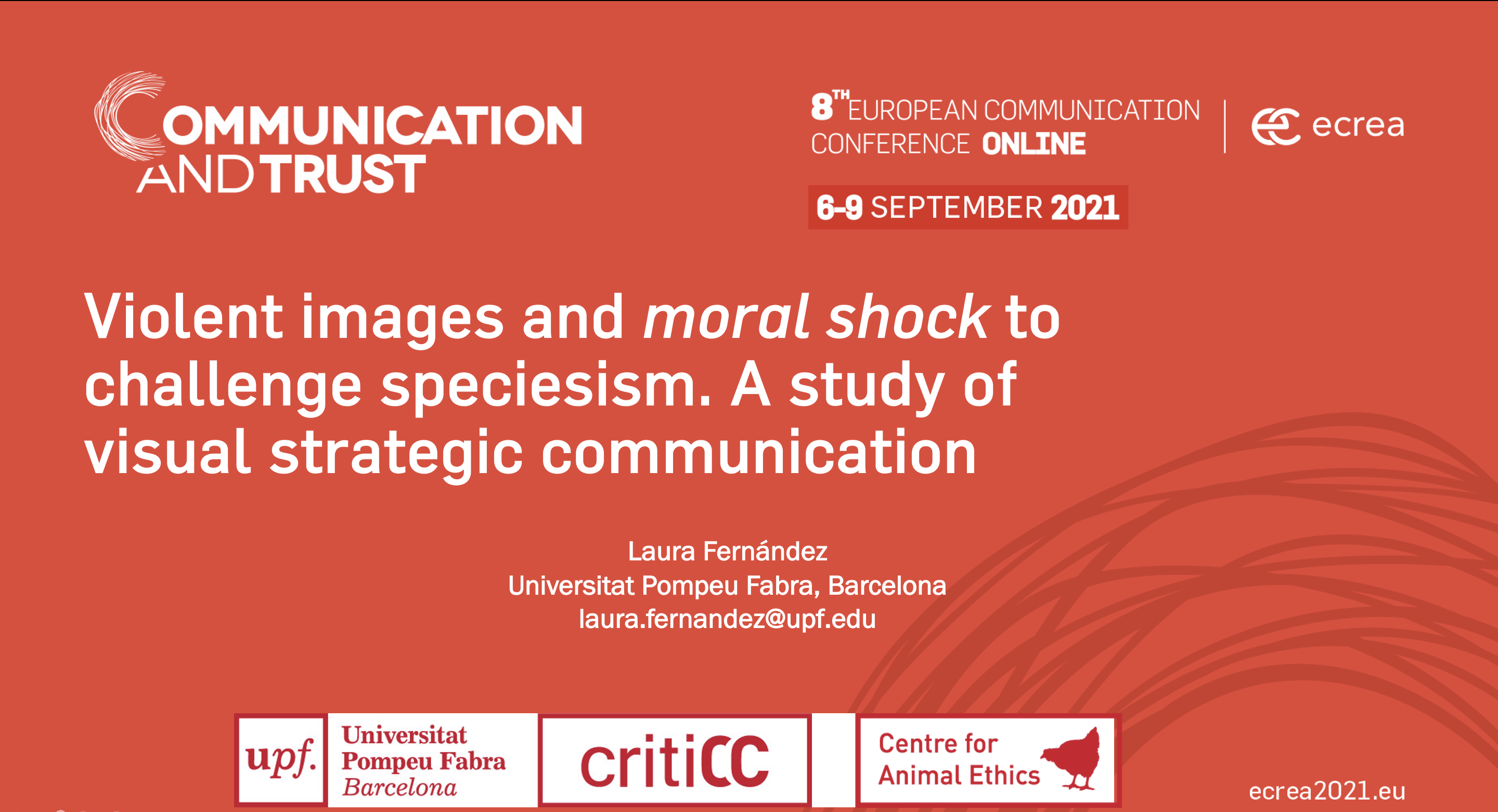