Fiona Probyn-Rapsey, on gender and animal studies - Past CAE events

The researcher from University of Wollongong visited the UPF-CAE

Fiona Probyn-Rapsey, professor at the School of Humanities and Social Inquiry at the University of Wollongong (Australia), visited the UPF-Centre for Animal Ethics from January 23 to January 27, 2020. She gave two talks. The first one to the students of the course on Critical Animal and Media Studies of the MA in International Studies in Media, Power and Difference, at UPF. The second, on 27th January open to anyone:

‘Pussy Panic’ and Glass Elevators: How gender is shaping the field of Animal Studies, by Fiona Probyn-Rapsey , School of Humanities and Social Inquiry University of Wollongong (Australia )

The ‘pussy panic’ of our title is a phrase that belongs to Susan Fraiman. It is a diagnosis, a lament, and a warning about how Animal Studies (AS) is currently torn between rising academic respectability bestowed through the “installation of Derrida as founding father” (Fraiman, 93), and the neglect that this entails for AS’s deep roots in feminist scholarship going back decades, and across a number of disciplines (Gruen 2018).  Finding that a ‘proximity to this feminized realm’ of ‘siding with animals’ can bring about a ‘pussy panic’ in male scholars, Fraiman draws a parallel between academic mainstreaming and the suppression of the ‘emotionally and politically engaged’ (93) work of earlier feminist writers. Inspired by Fraiman’s reading and her sense of a lingering pussy panic in the field of AS, we were interested to inquire whether or not the academic legitimacy the field deserves has also brought with it a privileging of men’s voices as it has developed over the years.  In 2015 we conducted a large, broad-ranging international survey of AS scholars. From that larger survey, the issue of gender stood out and enabled us to investigate Fraiman’s observations further.  Our data lends support to the idea that ‘pussy panic’ has indeed shaped the direction of the field so far.

Fiona Probyn-Rapsey is Professor in the School of Humanities and Social Inquiry at the University of Wollongong, Australia. Fiona’s research connects feminist critical race studies and Animal studies, examining where, when and how gender, race and species intersect. She is the author of Made to Matter: White Fathers, Stolen Generations (2013), and co-editor of 3 books, Animal Death (2013), Animals in the Anthropocene: Critical Perspectives on Non-human futures (2015) and Animaladies; Gender, Species, Madness (Bloomsbury 2018) with Professor Lori Gruen (Wesleyan University US). Fiona is also Series Editor (with Melissa Boyde) of the Animal Publics book series through Sydney University Press, http://sydney.edu.au/sup/about/animal_publics.html. 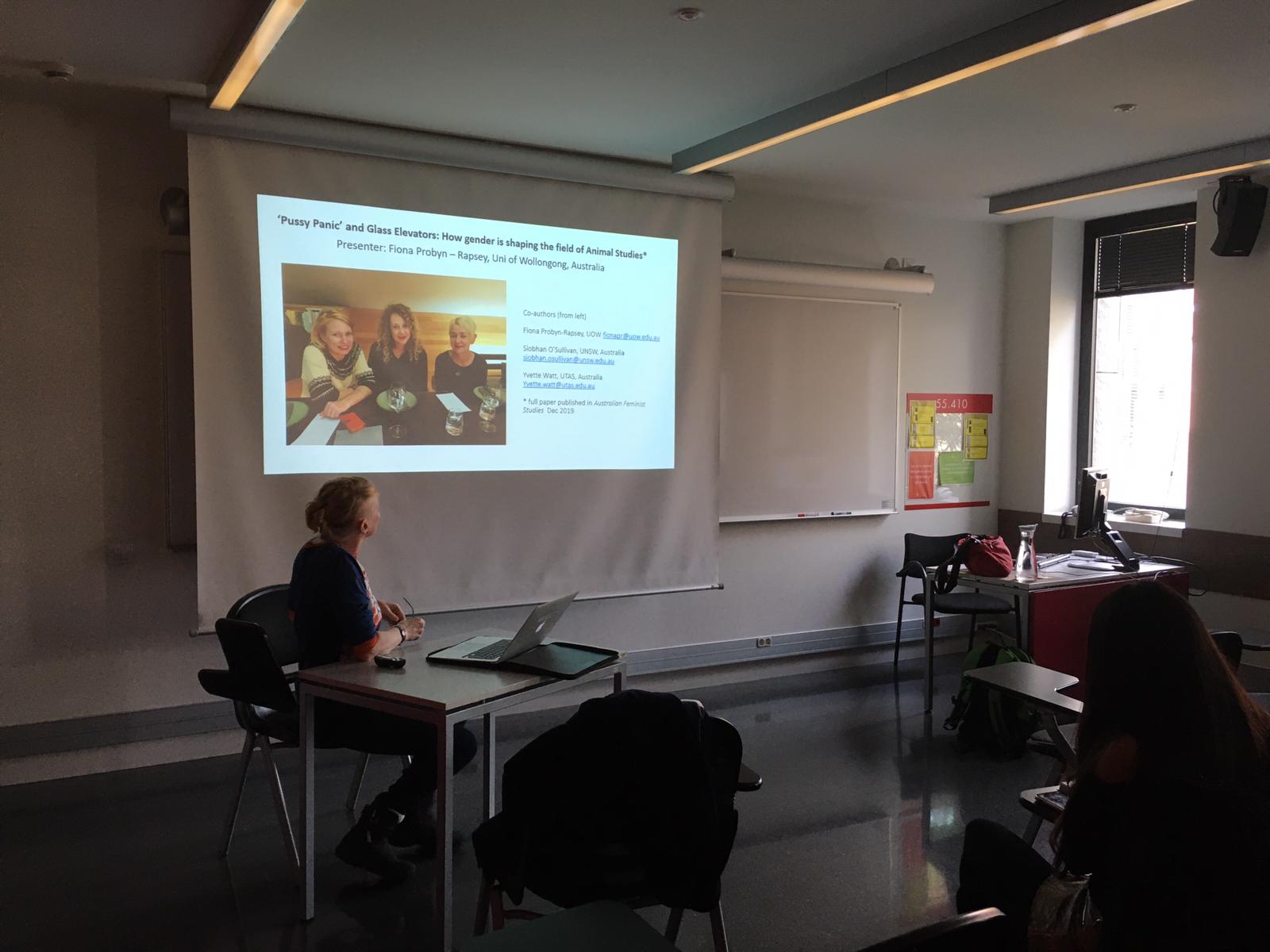 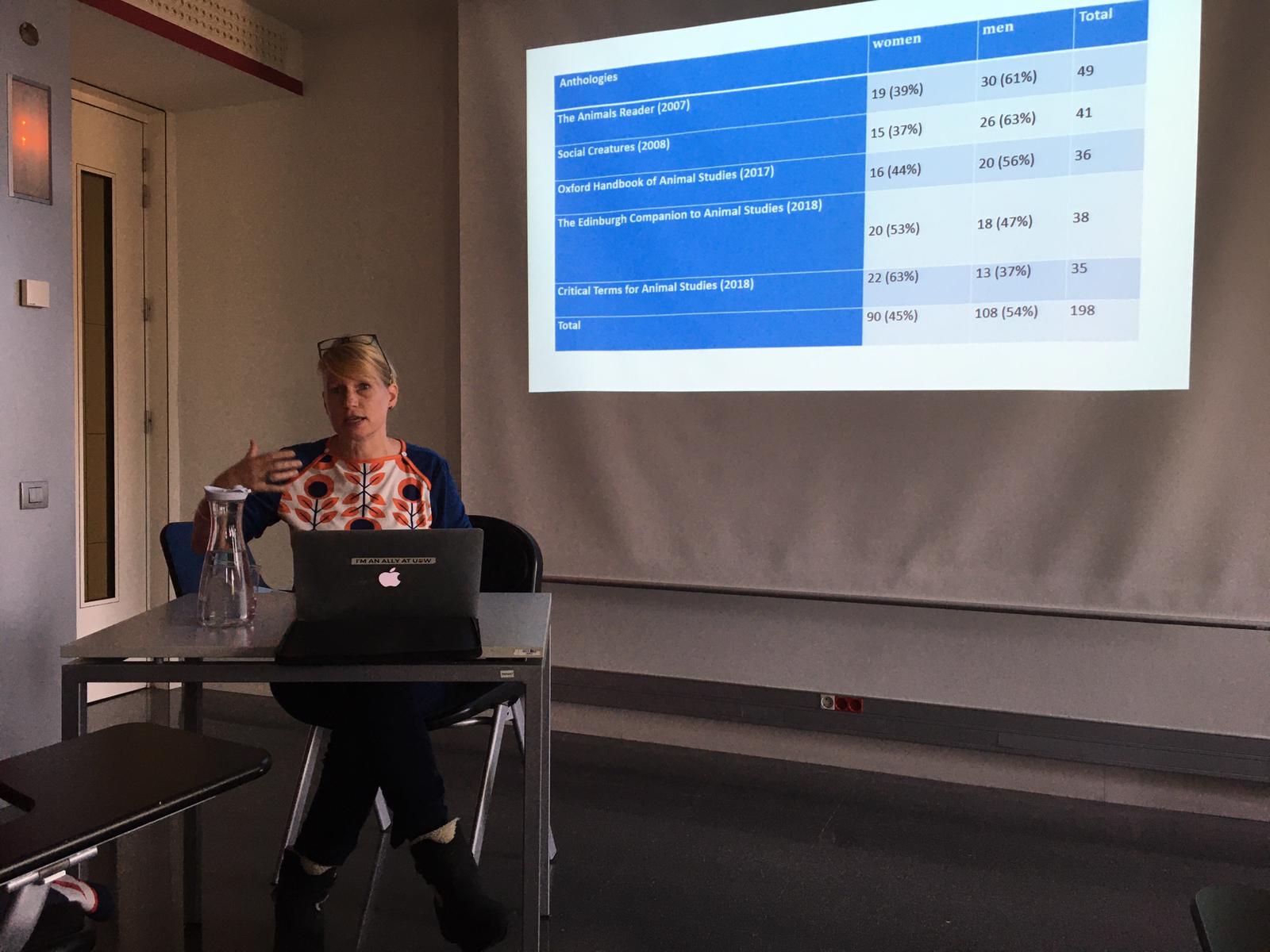