To build interfaces between the electronic domain and the human nervous system is one of the most demanding challenges of nowadays engineering. Fascinating developments have already been performed such as visual cortical implants for the blind and cochlear implants for the deaf. Yet implantation of most electrical stimulation systems requires complex surgeries which hamper their use in less severe pathologies or in cases in which suboptimal, but less invasive, treatment alternatives exist. Nevertheless, probably the most crucial limitation of previously developed systems based on central stimulation units is that they are not adequate for applications in which a large number of sites must be individually stimulated over large and mobile body parts, thus hindering solutions for patients suffering paralysis due to spinal cord injury or other neurological disorders. A solution to these challenges could consist in developing addressable single-channel wireless microstimulators which could be implanted with simple procedures such as injection. In fact, such solution was proposed and tried in the past but it did not achieve satisfactory success as the developed implants were stiff and too large. Further miniaturization was prevented because of the use of inductive coupling and batteries as energy sources. 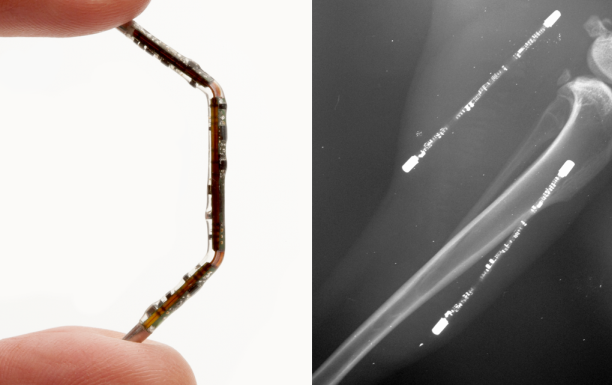 We are exploring an innovative method for performing electrical stimulation in which the implanted microstimulators will operate as rectifiers of bursts of innocuous high frequency current supplied through skin electrodes. This new approach has the potential to allow the development of ultrathin implants mostly built with flexible and stretchable materials. Because of such feature, and because of their intended functionality, we coined the name “Electronic Axons” (eAXONs) for these implants.