Interviews with students, speeches by the UPF rector, Jaume Casals, and by professor and journalist Mònica Terribas, live music, a commemorative video and the release of balloons from Gutenberg Square were the main features of the celebration. The party was presented live from the Poblenou campus studio set by Òscar Dalmau and Maria Rovira, alumni of Audiovisual Communication. 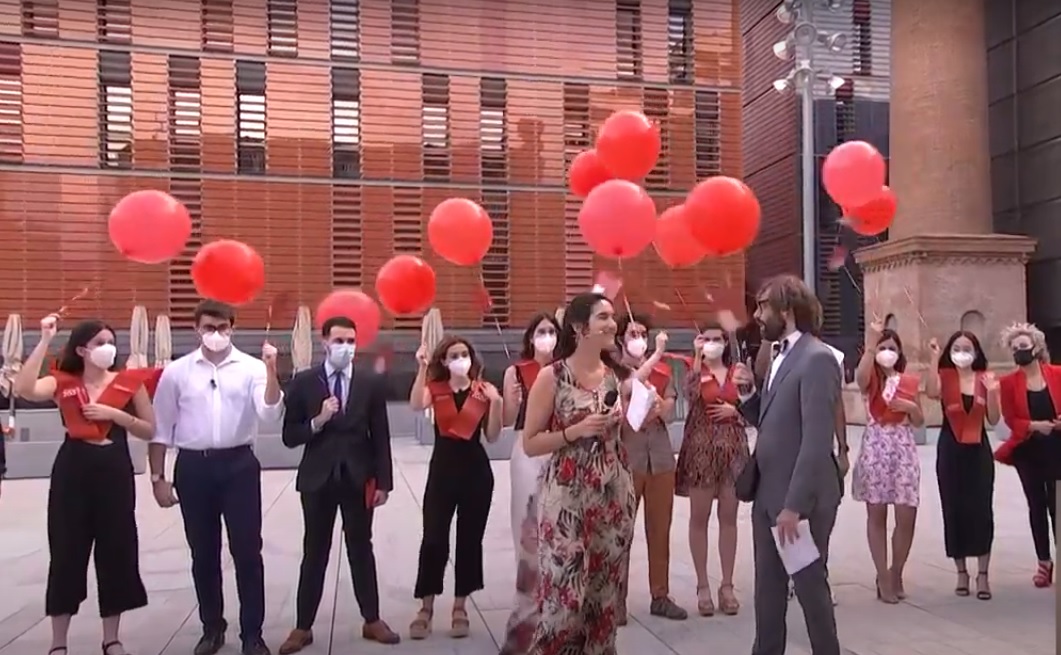 The UPF class of 2020 party was held online on the evening of 3 July, and was broadcast live on the University website and from the Twitter account @GraduacioUPF (#PromocioUPF2020), for the whole UPF community and to anyone who wished to join.

Until UPF can arrange an in person graduation ceremony, due to the health crisis, the virtual party revolved around the audiovisual studio set in the Tallers building on Poblenou campus, which was turned into an apartment, divided into different rooms and decorated right down to the last detail.

The party was presented from the studio set by Òscar Dalmau and Maria Rovira, UPF Audiovisual Communication alumni.

The party was presented from the studio by Òscar Dalmau, communicator, and Maria Rovira, comedian, writer and co-presenter of the Catalunya Ràdio programme Estat de Gràcia, both alumni of Audiovisual Communication at UPF. (classes of 1997 and 2013, respectively). It was attended by several undergraduate students, representing various University faculties and schools, as well as students representing master’s degree and doctoral students.

The start of the virtual party included a speech by Jaume Casals, UPF rector, recorded in the patio of the Roger de Llúria building on Ciutadella campus, the traditional venue for the graduation ceremony. The UPF rector, based on a quote from Pindar, encouraged all graduates to be more authentic and unique: “May each of you be exactly who you are, develop your own personality, but by learning to do so”, he said.

“I hope UPF has truly helped you to become who you are, to become the way you are”.

Jaume Casals noted that “we are most interested to know that we are at an institution for learning. We are at a university that respects the personal uniqueness of each individual first and foremost”, while he relates it to learning. “I hope UPF has truly helped you to become who you are, to become the way you are”, he concluded.

Mònica Terribas, professor at the Department of Communication and director and host of “El matí de Catalunya Ràdio", was another “guest” to join the party in person, along with the students.

She was given the task of addressing all the students live in an emotional speech: “It really is the best year we’ll have experienced at the University, because we have all, lecturers, students and PAS, had to leave our comfort zone and have had to manage the expectations we had in a different way”, she affirmed.

“It really is the best year we’ll have experienced at the University, because we have all, lecturers, students and PAS, had to leave our comfort zone”.

Referring to this year’s young graduates, Mònica Terribas assured that it is an extraordinary generation: “With the crisis of 2008 they learned how vulnerable our economy is, they realized that not everything turned out as they had planned, and that society was creaking. With the crisis of 2020 they have learned about physical vulnerability, and also the ability for all disciplines to collaborate”. The UPF professor noted that the university “would not make sense if we were not able to cooperate in the various sciences, and the pandemic has taught us all to work together”.

Throughout the virtual party, to the sound of live music by Old Shanela, the presenters interviewed the students who went up on stage in groups. In between, video-congratulations from various members of the teaching and research staff and administration and service staff were displayed, as well as from various campus services, which had already been shared since a week ago on the party website.

The different items constituting the graduation kit which the students who had signed up had previously received at home, included a cardboard champagne glass, the graduation sash, two balloons and a card on which to write a wish, all of which served as props throughout the hour of the broadcast.

In the last part, a commemorative video was shown in which several final year students talk about what their arrival at UPF was like, what their day to day was like, the Erasmus periods they spent, what they think of the University campuses, what they missed during their time at university, and how to face up to the future, among other things.

The class of 2020 party ended with all those present up on stage to release their wishes, written on a card tied to a balloon, from outside the Poblenou campus, in the middle of Gutenberg Square.

The party, which could be followed in streaming between 7 and 8 pm on 3 July, attracted an audience of up to 1,150 at the peak of connections. Given that the vast majority of people followed the event as a group, if we calculate an average of five people per connection, we can estimate the audience of the virtual party was in the region of 5,000 to 6,000.

Within Spain, the party was ‘attended’ by people from seventeen different autonomous regions. Catalonia was the region with the largest audience (58%), followed by Madrid (17.3%), Valencia (5.9%), the Basque Country (3.4%) and Andalusia (2.9%).