Last Wednesday, May 26, 2021, at 12:00 pm, in the "Sala de graus Albert Calsamiglia" of the Campus de la Ciudadella of the UPF, took place the award ceremony of the XVI Ernest Lluch Prize for Social and Political Sciences. Due to the current pandemic situation, the event could be followed in streaming on the university website (below you will find the direct link to the streaming recorded).

"Memòria en pell cremada. La guerra civil al Pallars Sobirà, un recorregut inefable per les nostres valls", work of Àssua Farré Lluvich, student of the Hugo Roger III Institute of Sort, has received the first prize in the XVI edition of the Ernest Lluch Awards. The award ceremony of this prize, given jointly by the Facultat de Ciències Polítiques and Socials de la UPF and the Fundació Ernest Lluch , took place on May 26.
In this edition, the number of works presented, 128, compared to 65 the previous year, was outstanding.
The award-winning works, which reflect to some extent the concerns and interests of society, have been prepared by women from public institutes and not from the metropolitan area of Barcelona for the first time since this prize has been awarded. On the other hand, the theme also deviates from the trend of recent years, gaining importance the reflection on racism and populism.
The awards ceremony was attended by Josep Lluís Martí, vice-rector for innovation projects of the UPF, Josep Maria Carreras, vice-president of the Ernest Lluch Foundation and president of the Academic Commission of the Foundation, and Miquel Salvador, dean of the Faculty of Political and Social Sciences.

The awarded works, of great invoice

The jury, was chaired by three professors from the UPF and three members of the Ernest Lluch Foundation, awarded the XVI Ernest Lluch Prize for Political and Social Sciences to Àssua Farré Lluvich, from the Hug Roger III Institute (Sort) for her work "Memòria en pell cremada. La guerra civil al Pallars Sobirà, un recorregut inefable per les nostres valls", that recovers in an objective way the memory of the great-grandfather assassinated in an unjustified and cruel way by the winning side. 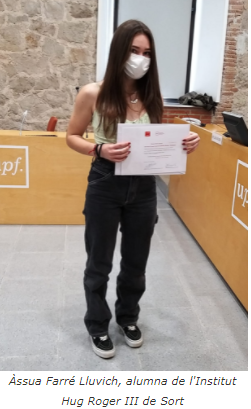 According to the jury, it is a work with "a very good formal invoice based on oral history, archive documentation and contextualization of life in Pallars Sobirà in those years". In addition, her work includes a small book with poems and drawings, and in general manages to connect with the current historiography through an excellent narrative work.

In addition, the jury decided to award three runners-up prizes: "Dels llibres a les aules. Educació durant la II República i el franquisme", carried out by Núria Garcia Anglada, from the Institut Palamós (Palamós). Her work is an exploratory exercise of bibliometric research, which contrasts the books used by both political regimes through the context of the time and the specific legislation.

In "Generació (no) acomodada", a paper presented by Marta Ferret Pascual, from the Institut Nou de Vilafranca (Vilafranca de Penedès), the author analyzes and compares the wide range of youth political organizations with the aim of addressing the eternal generational debate on whether or not young people are accommodated.

Maria Ortiz Ruiz, from the Sa Palomera Institute (Blanes) also received an award for her work "Mares del Reich", which analyzes the figure of women in the Third Reich, proud and accomplices of a regime that subordinated them. 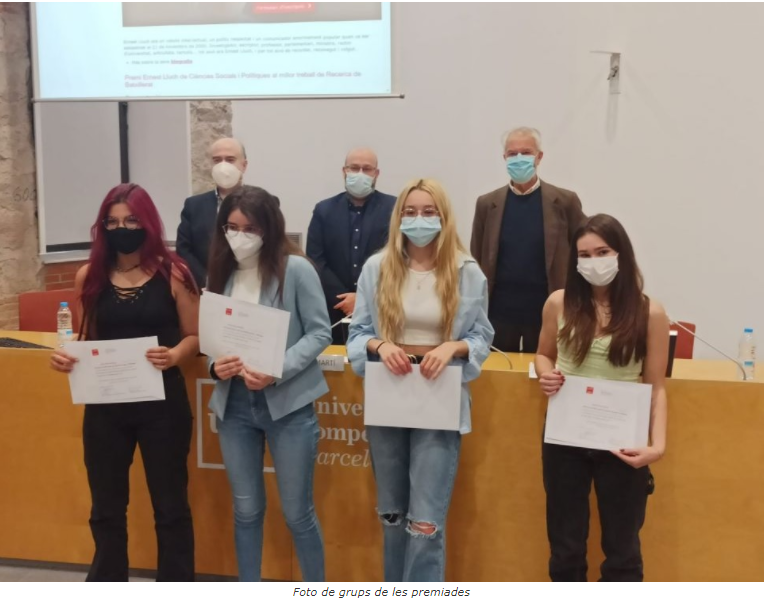