At the ceremony, held at the Mercè Rodoreda building on the Ciutadella campus, the rector, Oriol Amat, congratulated the university professors, contracted professors and senior lecturers, hailing from all the university’s departments, who obtained their positions in 2020 and 2021. 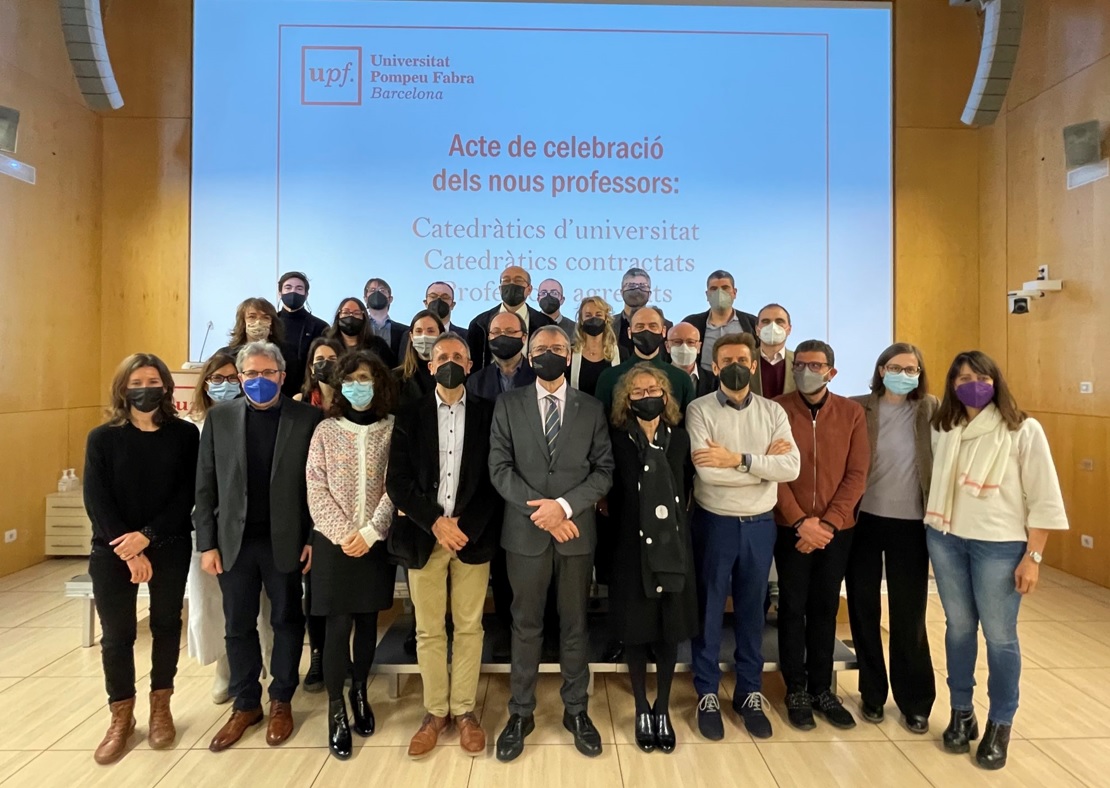 The multipurpose hall in the Mercè Rodoreda building on the Ciutadella campus was the setting for a ceremony in honour of the 36 teaching staff members, hailing from all UPF’s departments, to obtain permanent positions in 2020 and 2021. Although usually an annual affair, the event could not be held in 2021 because of the pandemic, so this year’s edition celebrated the new staff from the last two years.

After some welcoming remarks by Amat, Vice-rector Pareja read the names of the new permanent teaching staff members, who came up on stage to be congratulated and given a commemorative gift by the rector. Next, the permanent teaching staff members Aïda Solé Auró, a senior lecturer in the Department of Political and Social Sciences, and Gaël Le Mens, a contracted professor in the Department of Economics and Business, each delivered remarks on behalf of their respective groups. 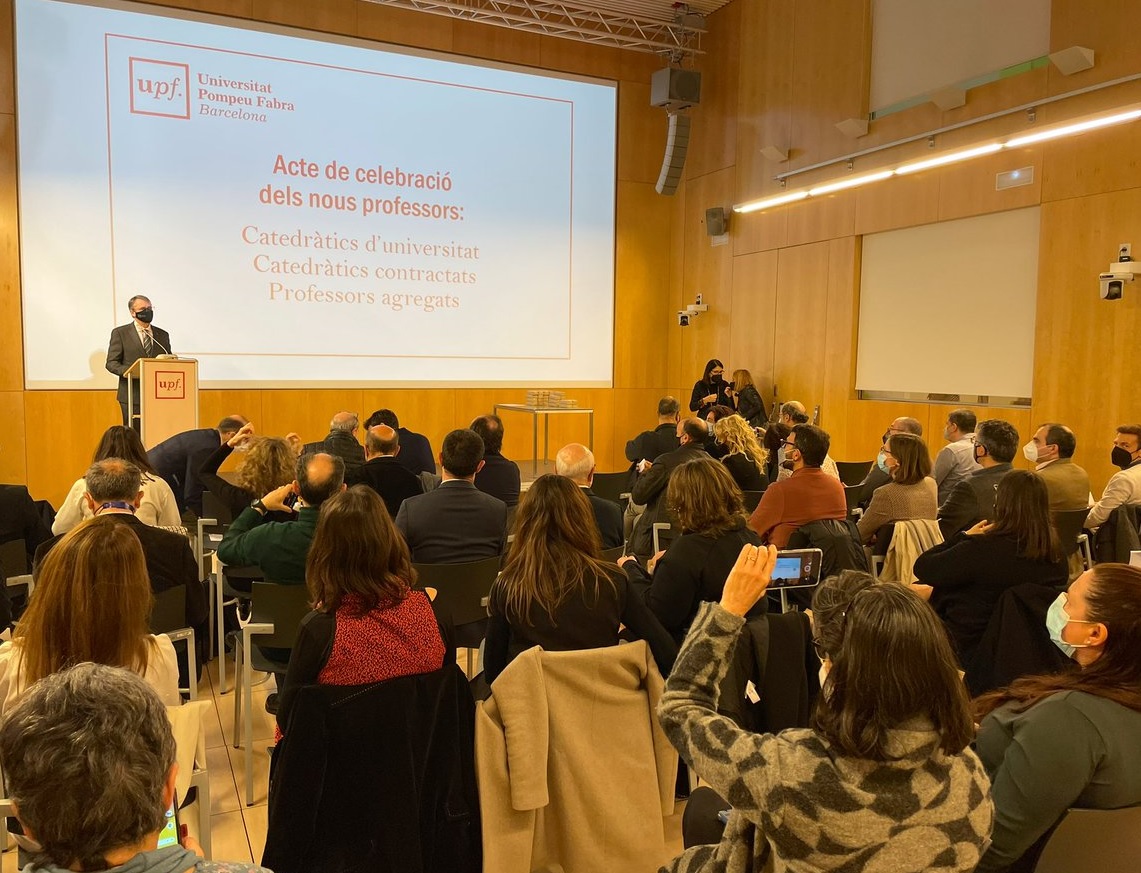 Oriol Amat began his remarks by emphasizing that the ceremony was to celebrate very good news, as universities – and the public sector in general – have faced many challenges since 2008 to stabilize and recruit staff and with regard to staffing expenses. This, in turn, ‘has made it difficult to bring in new talent. Universities are facing a serious rejuvenation problem’. The rector stressed the fact that, once their papers have been accepted, teaching staff work to ensure that the knowledge they have created reaches society and businesses. He cited various figures showing that ‘when it comes to knowledge creation and scientific output, our country is doing very well; however, we still have a long way to go when it comes to impact and knowledge transfer’.

In his remarks, the vice-rector Pablo Pareja noted that ‘this is one of my favourite events and one that, as an institution, makes me feel proudest. Without you, the university could not do what it does. It is the people who make our greatest strengths a reality.’ The vice-rector provided data pointing to a change of trend, noting that the number of teaching staff who are promoted, stabilize their positions and are made permanent is growing. In the previous two-year period (2018-2019), the total was 18 people; in 2020-2021, the number doubled, to 36. The teaching staff are also becoming younger, with the average age of permanent staff members dipping below 50 (to 49.8), although it needs to drop further.

As for the teachers’ remarks, on behalf of the senior lecturers, Aïda Solé Auró recounted the path she followed from the time she was a doctoral student until achieving her current position. ‘It has been a very intense journey, surrounded by quite a bit of uncertainty. More and more demands are being placed on us as teaching staff in all areas, including research, management, internationalization and knowledge transfer.’ Nevertheless, she continued, ‘it has been a fascinating path, a long journey full of challenges, sacrifices and a desire to keep improving’. She noted that both the Department of Political and Social Sciences and the DEMOSOC research group offer her highly stimulating environments, allowing her to gain local and international knowledge, understand how the institution works and balance her work with her family life. ‘Public universities are basic and essential to the organization of any democratic society’, she concluded.

For his part, speaking on behalf of the professors, Gaël Le Mens said, ‘I am very thankful to UPF and to the Department of Economics and Business, which has been my home since 2009, when I secured a tenure-track position. This gratitude also comes with a set of real responsibilities as a teacher and a researcher that must be met and which I fully accept.’ The professor added, ‘One of the best things about this institution is its international recognition as one of the world’s best young universities. However, over the years, UPF needs to stay young, in both form and spirit.’ 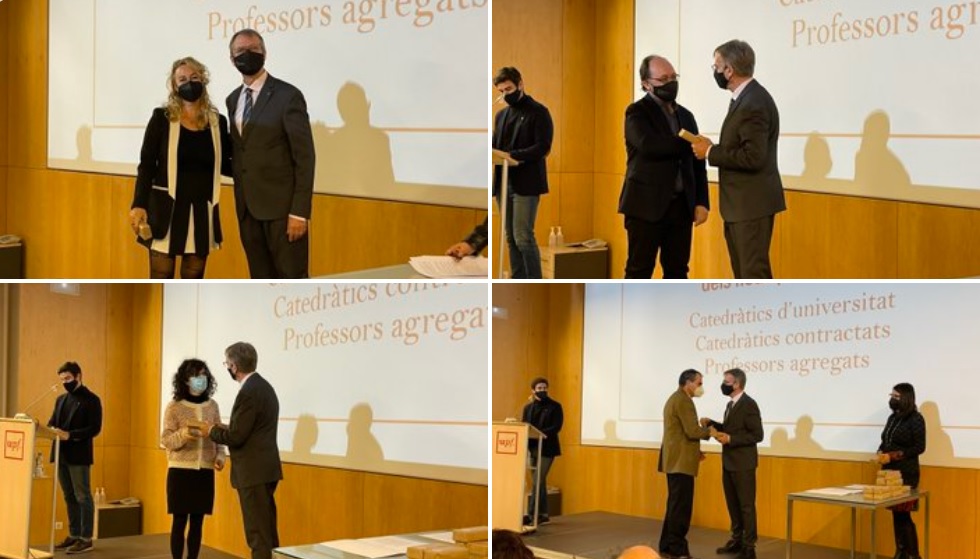 The 36 new teaching staff members and their respective departments are as follows: