A series of structures from the Iberian period excavated at Turó de Vilanera and at Muntanya Rodona (l’Escala, Alt Empordà) suggest that local groups managed and controlled this territory centuries after the establishment of a Greek community in the port of Emporion. 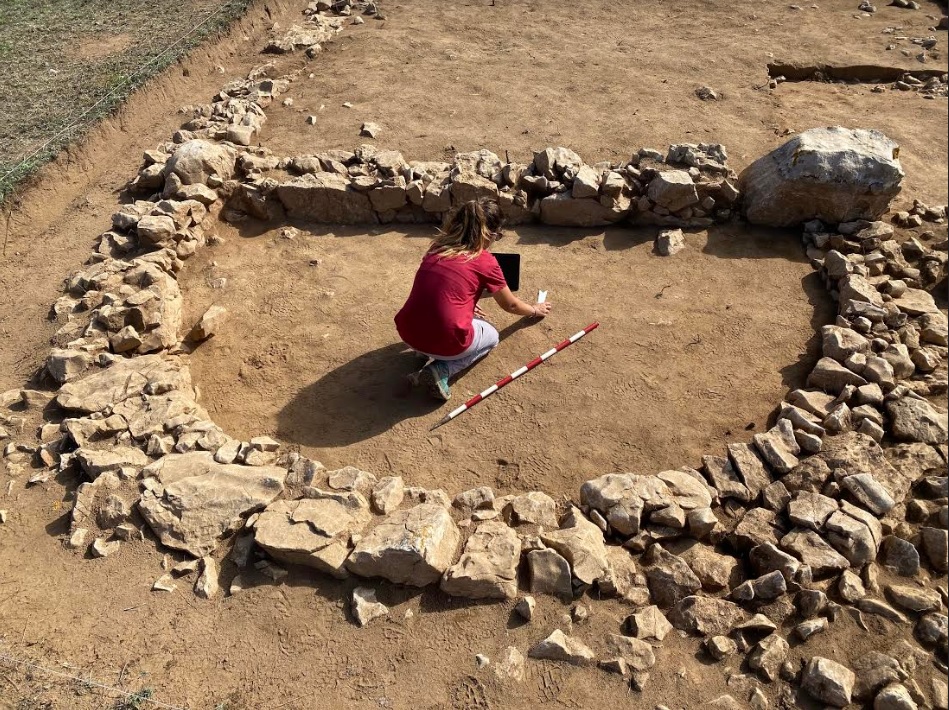 A few weeks ago, the excavation campaign carried out by a research team from Pompeu Fabra University at Turó de Vilanera (l’Escala, Alt Empordà) came to an end. The work focused on the upper part of the hill, located in an area with a magnificent visual command over the Montgrí and the lowlands that extend from the foot of the hill. The hill rises above a landscape riddled in ancient times with lagoons and watercourses that allowed fast connections between small local groups scattered in these inland areas, and with the port of Emporion (Empúries), which is located less than two kilometres away.

The building is constructed from stone plinth and mud walls, a common construction technique in the Iberian world, used in the area since the sixth century BC

The excavation works, led by Ana Delgado and Lorena Marin, researchers with the Mediterranean Archaeology Research Group (GRACME) of the UPF Department of Humanities, have exposed several structures of which a large apse-form building consisting of three rooms stands out. The building is constructed from stone plinth and mud walls, a common construction technique in the Iberian world, used in the area since the sixth century BC. Areas of metal-working activity have been documented next to the building and some rectangular structures have been detected, which will be excavated in future campaigns and due to their shape may be related to agricultural production and the management of surpluses. The documented materials, still under study, indicate that the building was constructed and occupied between the 4th and 3rd centuries BC.

A look to the past

The excavated building has a unique type of structure for Iberian times, hitherto unknown in this territory. Its shape is in keeping with traditional architectures of the communities of the region’s late Bronze Age and early Iron Age, that is, from times before the arrival and settlement of Greeks in the territory.

The excavated building has a unique type of structure for Iberian times, hitherto unknown in this territory

The GRACME researchers argue that the form of this building not only indicates the continuity of traditions and lifestyles among local communities centuries after the arrival of the first Ionians to the region, but would also be a form of representation of these groups in these areas of conflict and cultural contact.

This archaistic architecture could translate ideas of identity and belonging, of the use of the past to legitimize rights over the territory based on arguments such as descendancy, continuity and tradition. This look to the past has not only been detected in the floor plan of the building, but is also observed in some of the material elements used in the construction of the structure itself, as well as in its location: visually, the building dominates an ancestral area of worship that has hosted tombs since 4,500 BC and was the main funerary area of the communities that inhabited this territory from the late Bronze Age to the 8th century BC.

The results obtained offer a significant advance for the research project to which the campaign belongs, Greeks and Local Communities around Empúries, approved and subsidized by the Department of Culture of the Catalan Government, which enjoys the close collaboration of the Archaeology Museum of Catalonia-Empúries.

Also the excavations carried out during September and October in the neighbouring Muntanya Rodona, under the same project, have contributed decisively to expanding knowledge of the changes and continuities undergone in the area of Emporion after the establishment of a Greek community on the coast. Excavation works, directed in this area by Aurora Rivera Hernández (UPF) and Mateo González (University of Trier, Germany), researchers of the GRACME, have documented an occupation dating from the seventh and sixth centuries BC, as well as a housing structure corresponding to the Iberian period.

Excavations that propose a new model of society

According to Ana Delgado, who is an associate professor at the Department of Humanities and GRACME coordinator, “the work we have carried out at Turó de Vilanera and Muntanya Rodona has allowed us to obtain very important data on the Iberian communities of the territory of Emporion. For the first time, they have revealed what the housing and production structures of rural Iberian communities were like around Empúries”.

The UPF researcher highlights that “the result of these excavations means we can consider new models that question the traditional idea that this was a colonized and Hellenized landscape. Rather, it is revealing rural communities that, despite maintaining close contacts with the Greek community established in the port of Empúries, chose to maintain certain traditions and lifestyles that connected them with their past”.

Also, “the discovery of these new settlements will allow us to explore the life of traditionally overlooked Iberian rural communities and highlight their relevance in these colonial landscapes of the ancient Mediterranean”, Ana Delgado concludes.

Other researchers from Pompeu Fabra University, as well as students from the University of Barcelona and from UPF too, have also taken part in this year’s excavation campaign at Turó de Vilanera and Muntanya Rodona.