Philanthropy and patronage: in search of new resources for the university - Reports

Philanthropy and patronage: in search of new resources for the university

Philanthropy and patronage: in search of new resources for the university

UPF launches the UPFund programme to diversify its sources of funding and forge links with potential donors. 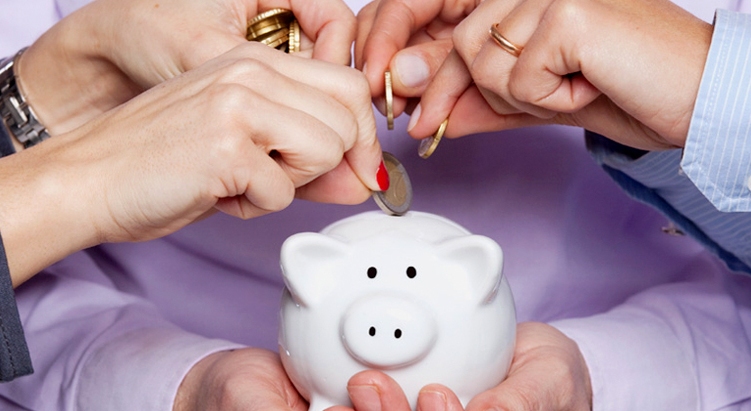 In 2015, UPF launched the UPFund - Sponsorship and Patronage programme with the aim of diversifying its sources of income and obtaining additional resources that, in a context of budget constraints, would make it possible to maintain the university model. According to Jaume Badia, manager of UPF and one of the people behind the initiative, ‘The launch of UPFund is important, because it is an essential first step: it will lay the groundwork for forging bonds and partnerships with potential donors.’

Traditionally, fundraising programmes at Spanish universities have been few and far between and heavily concentrated at private institutions and business schools. ‘The lack of references allowed us to design the programme almost from scratch’, explained Pau Fernández, the UPFund director. ‘We have learned that donors do not want to give to the university generically, but rather to specific projects and causes’, he continued. ‘They have to know what their donation is being used for at all times.’ In this regard, transparency, accountability, thanks, and donor recognition are the cornerstones of UPFund.

The tax benefits of donating are an important and largely unknown aspect for much of the general public. As of 2016, donors can deduct up to 75% or 35% of the first €150 of their donation, depending on whether they are a physical or legal person. ‘Despite the improvements in the law, if the aim is truly to promote the construction of a culture of patronage and philanthropy that today is virtually non-existent, it remains clearly insufficient and offers few incentives’, Badia said. For instance, there is room for improvement in the additional deductions the Catalan government allows taxpayers to take for donations to institutes and research centres, but not to universities. ‘Obviously, universities also conduct quality research. It seems incongruous that, for tax purposes, this activity is not treated the same way’, Badia pointed out. ‘Although’, he added, ‘I know that the current directors of the Catalan Secretariat for Universities and Research agree on this point.’ 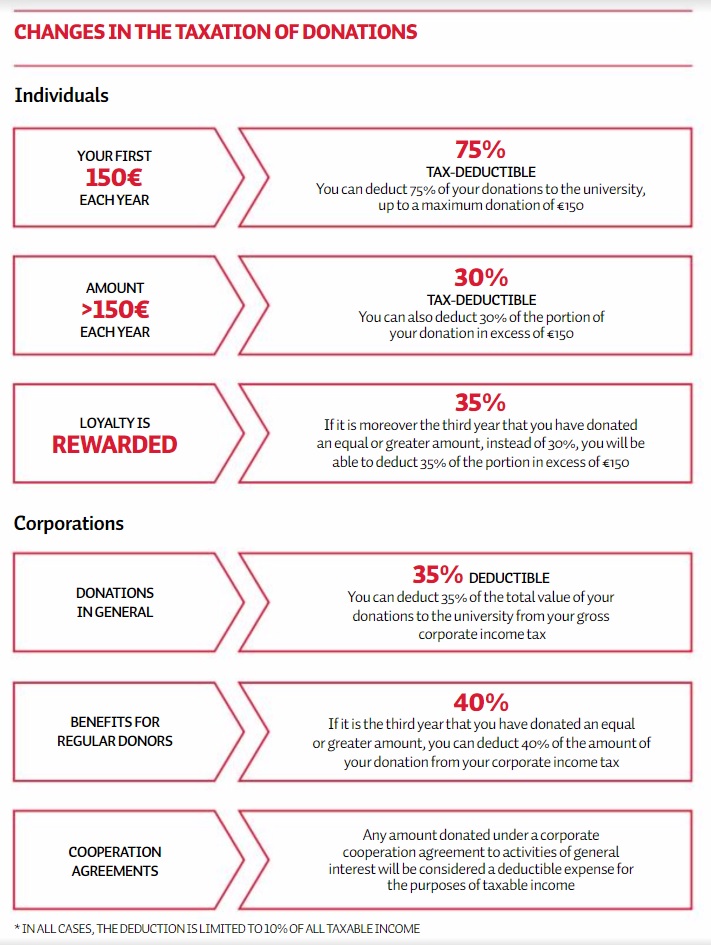 What are the donations used for?

The UPFund programme is aimed at both individual and corporate donors and is organized around six types of projects. Special projects comprise innovative, strategic and multidisciplinary initiatives. Many of the activities organized in honour of UPF’s 25th anniversary fall into this category, such as the 1st Alumni Meeting, the inauguration of UPF Art Track, or the holding of the Young Universities Summit with Times Higher Education. Other recent projects in this group include the promotion of the Pompeu Fabra Chair, the restoration of the Dipòsit de les Aigües building, and the reinstallation of a mural by Perico Pastor. Research projects include initiatives in all fields of knowledge that would benefit from external funding. The UPF Knowledge Portal makes it possible to filter these initiatives by area of knowledge and research group. Company chairs focus on disseminating knowledge on a given topic of interest to both the university and a company to the community at large and are intended to promote long-term partnerships, as they reflect the interests, challenges and needs of both institutions. The UPF Scholarship Fund is a new instrument that will allow the university to supplement and increase the volume of resources currently allocated to its various scholarship programmes, such as grants for students facing unexpected financial hardship; the stipend programme, which provides an additional grant in the form of a stipend to supplement the Equity grants awarded to students in economically precarious situations; or tuition waivers for students who graduate with top honours in secondary school. Solidarity projects make it possible to fund charitable, social entrepreneurship, development cooperation, and volunteering initiatives. Finally, the international projects being prepared will make it possible to promote the university’s internationalization in various fields.

Why give to UPF?

Her donation was used to finance full tuition for a student on the master’s programme on International Studies on Media, Power and Difference.

‘To build a free and ethical society, we need to promote disciplines such as the humanities’

Her donations to the CEXS have made it possible to finance PhD scholarships and acquire cutting-edge scientific equipment, such as a DNA sequencer.

His donation was earmarked for the Archaeology Laboratory, which is working on an excavation in the city of Tyre, in southern Lebanon.

‘The effort put in by these researchers, often in war-torn regions, has to be recognized’

Its donation went to the scholarship programme for students in situations of hardship, aimed at students who face significant financial difficulties to pay all or part of the cost of tuition.

This September, the Alumni programme launched a fundraising campaign for the UPF Scholarship Fund. For Anaís Tarragó, deputy director general of the UPF Foundation and one of the initiative’s sponsors, ‘Alumni collaboration is important, because alumni know what it means to study and enjoy the experience at UPF. They are thus our best ambassadors. With the slogan “Give talent a chance”, we want our alumni to be able to give someone else the opportunity to enjoy the same experience they did.’

Throughout the campaign, alumni will be informed of the tax benefits of donating. An annual donation of €150 to the scholarship fund will cost donors only €37.50, since the remaining €112.50 is tax-deductible. According to Tarragó, ‘This donation amounts to just over 10 cents a day, 10 cents that can give an opportunity to a talented individual who would otherwise not have it.’